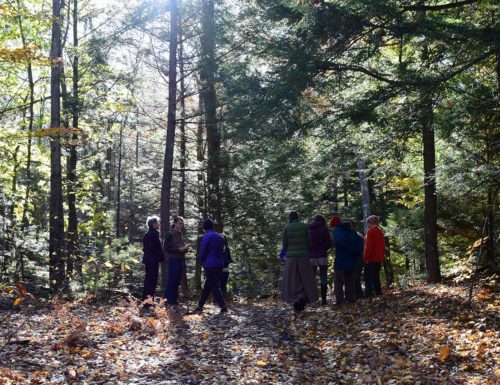 Worshippers stop for a moment of prayer and gratitude as they walk to the service at Church of the Woods. Photo: Heather Beasley Doyle

[Episcopal News Service] Thick with golden-red leaves, the harbinger of fall in Canterbury, New Hampshire, a mosaic of tree branches rustles above and all around the Rev. Stephen Blackmer. A dozen worshippers face him. He encourages them to edge closer. “The Holy Spirit is so very loud today,” he explains as they advance their semi-circle, hoping to hear the 61-year-old priest’s voice above the autumnal wind. Beyond the woods, the wind roars. Within this natural sanctum, the sound dulls, announcing itself steadily through leaves and branches.

Blackmer had begun Sunday afternoon service at Church of the Woods by tossing the Boston Red Sox baseball cap from his head and efficiently draping a green stole over his neck. Like other Episcopal priests, he read from the Gospel of Luke and the book of Joel. Unlike many, Blackmer added a reflection by the Franciscan priest Richard Rohr. He led his small group in simple song and expressed gratitude for the week’s much-needed rains. He wove the day’s readings into a very brief homily on abundance and humility. 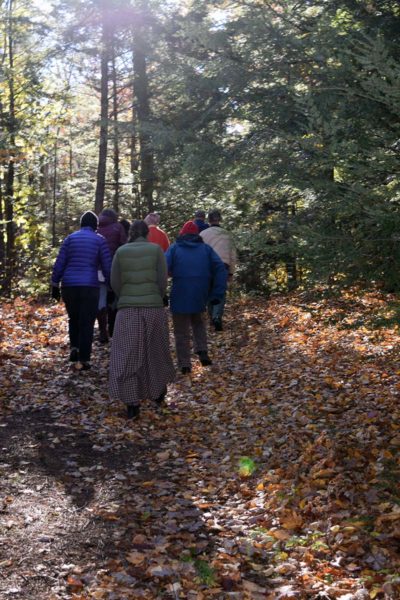 With that, he sent his small flock into the woods for 25 minutes, “to encounter God.” Some immediately disappeared into nature. Others sat or wandered. When Blackmer rang two large bells, everyone reassembled. They adorned the tree-stump altar, readied for Eucharist, with acorn tops, dried leaves, mushrooms and other mementos. They spoke of sunlight, brilliant leaves and gratitude. They passed the peace with hugs, smiles and hushed, warm voices.

Breaking the bread for Eucharist, Blackmer offered the first piece to the earth. Once everyone had sipped wine from a ceramic goblet, he poured the last drops back to the earth as well. When the service ended, congregants helped carry everything out of the woods, their chapel. Because if Blackmer is clear on anything, it is this: The woods are the church, the space in which seekers commune directly with the divine.

Blackmer seems at once the most and least likely person to lead Church of the Woods, the main program of Kairos Earth, the religious nonprofit he started in 2013. He dedicated the first 25 years of his career to conservation, ultimately founding and leading the Northern Forest Center. He’d established a daily meditation practice. He’d grown up without any religion in particular. He had never read the Bible. “Well, he was completely unchurched,” says Professor Janet Ruffing, a Sister of Mercy who taught Blackmer at Yale Divinity School.

In 2005, a vision quest in the desert left him feeling that “something had profoundly shifted in my life, but I had no clue what it was.” That feeling idled until a return trip from an authentic leadership workshop two years later. As his plane descended toward the Dublin, Ireland, airport for a layover, he saw a church steeple through the window and heard a very clear voice say: “You’re to be a priest.” Blackmer paid attention. “I instantly knew it was true,” he says. “It wasn’t a proposal, and it wasn’t a question.”

The idea didn’t go down easily; the thought of becoming Christian, let alone joining the clergy, unleashed serious internal grappling. He visited an Episcopal monastery, where on the third day, “I felt like my heart just broke open and tears came to my eyes,” he says. Four months later, walking into an Episcopal church (on a Monday – “I was still too chicken to go on a Sunday”), Blackmer instantly knew that it fit. 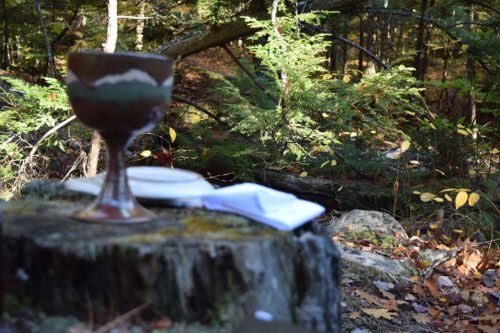 A tree-stump altar at Church of the Woods in Canterbury, New Hampshire. Photo: Heather Beasley Doyle

Reading the Bible for the first time at Yale Divinity School, Blackmer began to see “the entire universe as the physical manifestation of the divine.” He also read that Jesus prayed in nature. “It never says, ‘and then Jesus went into the temple to pray,’” he says. Seeing nature as sacred and finding the divine by going into nature for prayer and contemplation made sense to Blackmer.

In Episcopalianism, he also discovered a ritual and liturgy that he loves. “Steve makes the connection between the sacrament of nature and the sacraments as we experience them liturgically,” Ruffing says. “He’s functioning from a very highly sacramental theology.”

Throughout divinity school, his concern became, “How does this calling to be a priest fit with my calling to the natural world?” Environmental work still beckoned. And he felt an unexpected pull to start a church. He ignored the latter until 2012 when that pull resurfaced as he stood on the land that is now Church of the Woods. “Oh, you mean like a woods church?” he thought. “I could do that.” 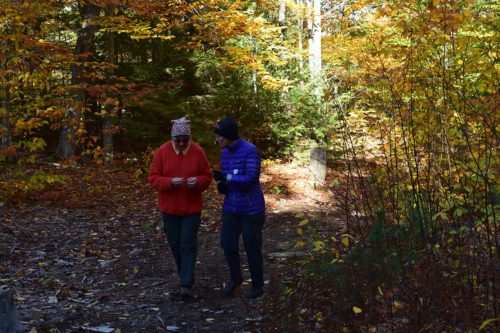 Susan Fogleman, left, and Wendy Weiger walk to the service at Church of the Woods on an October Sunday. Photo: Heather Beasley Doyle

Anywhere from three to 30 people attend Church of the Woods’ weekly services. Andrea Chan rarely misses a Sunday. She grew up Catholic, then left the denomination in high school. In college, she turned to Evangelical Christianity. Forty years later, Chan stopped going to church and waited, she says, for God to show her what was next.

That was four years ago. While waiting, Chan spent Sundays in contemplative prayer and walking. “I’ve always been an outdoors person,” she says, “but had never really connected that with my spirituality.” In 2014 Chan read an article about Church of the Woods in her local newspaper. She knew it offered the next step on her spiritual path. “It felt like an immediate community,” she says of Church of the Woods.

Wendy Weiger, who travels five hours from Maine every few weeks to attend, echoed this sentiment. “It’s been wonderful to have a group of people who’ve thought about these issues; the theology,” she says. Weiger, a research physician, environmental activist and writer, found solace in the woods after a deeply challenging period in her life when she was in college. “By connecting with nature, I was able to reconnect with God,” she says. “It was just integral with my healing.” 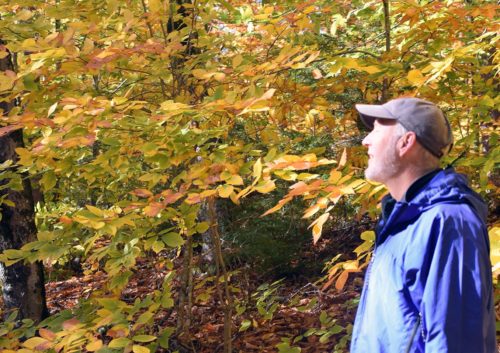 The Rev. Stephen Blackmer eyes his alfresco church on a Sunday afternoon in October.  He hopes to build a second building in the space to the right of him for retreats, but he says there will be “no gourmet food” at the retreats. Photo: Heather Beasley Doyle

Despite his congregants’ ardor, Blackmer questions the demographical soundness of his plan. According to the Pew Research Center, New Hampshire is the least religious state in the country: 36 percent of New Hampshire residents identify as “unaffiliated” with any religion and only 20 percent consider themselves “very religious.” Forty percent of all Americans consider themselves “very religious.” “By any normal standards, we shouldn’t be doing this,” he says.

Is it foolhardy to imagine such a place – an alfresco Christian church steeped in nature, contemplation and liturgy – thriving in secular New Hampshire? Perhaps it makes complete sense: Maybe the time is right, the place perfect, for just such a religious twist, particularly considering declining Episcopal membership and attendance.

“I think part of my job is to witness the death of what has been and to midwife something new,” says Church of the Woods congregant Rachel Field, a 27-year-old graduate of Yale’s Berkeley Divinity School and an Episcopal deacon who spent her supervised ministry placement at Church of the Woods. “But it will be different, and it will be good because it will be led and rooted in Christ.”

Decay is “an always thing,” Blackmer says, noting the fungi as he scans his church’s leafy ground. Fungi play a key role in the decay process, in renewing the earth. He notes in nuanced fashion that the natural process of decay and rebirth, as seen clearly in the woods, is a real-time, tangible example of the biblical theme of death leading to new life. 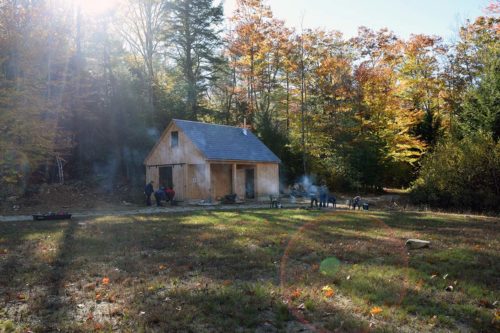 Church of the Woods includes a barn stacked with wood. In extremely inclement weather, the Rev. Stephen Blackmer conducts portions of the service in the barn. Photo: Heather Beasley Doyle

Blackmer recently connected with six other congregations in the United States and Canada whose theology and worship echoes Church of the Woods’. In them, and others, he senses the germ of a new faith expression. “There’s something that’s really waiting to take shape,” Blackmer says. He stands ready to nurture this emerging movement, however small.

“It’s lovely to see Christianity not heralding the domination and usurpation of the Word, but reminding us of whose creation this is,” says the Rt. Rev. Rob Hirschfeld, bishop of New Hampshire. “There’s nothing that mediates; there’s nothing that’s humanly constructed. … For some, it’s challenging,” he says. “Who wants to brave the rain, the snow, the wind?”

Blackmer’s hearty crew, for one. In particularly bleak weather, they take refuge in the church’s small barn, completed last December. It takes a lot to keep them inside, though, away from the heart of their spiritual practice. “Church for this community is not a casual thing,” Blackmer says. “It’s serious, but it’s joyful.”

And it’s a uniquely joyful earnestness: to follow the liturgical calendar and break bread together as the seasons unfold above, below, sun shining, snow falling, wind cooling worshippers’ faces; to center into quiet, connecting with God in a deep way.

“I just never thought that I’d find anything like this,” Chan says. “It never even occurred to me to pray for it. I think for the first time in my life I’m in the right place.”