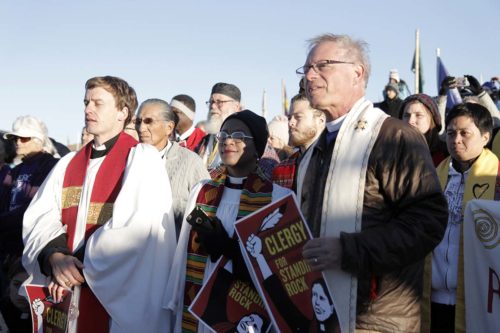 The Rev. Stephanie Spellers, canon to the presiding bishop for evangelism and reconciliation, center, and California Bishop Marc Andrus, right, join a circle of more than 500 interfaith allies standing in prayerful, peaceful solidarity with the Standing Rock Sioux Nation in their opposition to the route of the Dakota Access Pipeline. Photo: Lynette Wilson/Episcopal News Service

Editor’s note: An image gallery of the gathering on the Standing Rock Sioux Nation is here.

[Episcopal News Service – Cannon Ball, North Dakota] “We knew you were coming; that one day you would come here and start asking questions about your government,” said elder Regina Brave, her long, gray braid falling over the word “navy” written in yellow, capital letters across the top of her black, leather vest. “We are all children of God. Black, red, yellow, white, are all represented.”

Brave, an Oglala from the Pine Ridge Reservation in South Dakota, took the microphone at a gymnasium in Cannon Ball, North Dakota, on Nov. 2, the night before more than 500 interfaith clergy and laity joined opponents of the Dakota Access Pipeline in a show of prayerful, peaceful, nonviolent and lawful solidarity and witness. 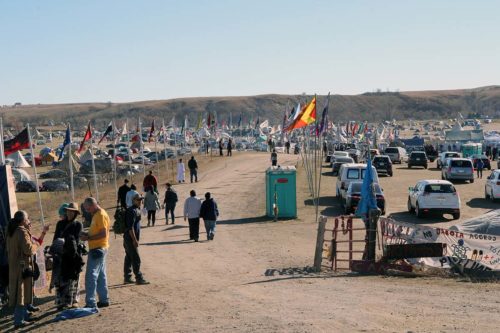 The majority of the opponents of the Dakota Access Pipeline’s route live in the Oceti Sakowin Camp. The Standing Rock Sioux Nation is paying $1,500 a day for roll-off dumpsters and portable toilets. Photo: Lynette Wilson/Episcopal News Service

The Nov. 2 meeting served as a warm up. On the morning of Nov. 3 – as the sun came up, the temperature in the mid-30s – the interfaith allies entered the Oceti Sakowin Camp, the largest of the three camps, and formed a circle surrounding the sacred fire that burns 24 hours a day in the camp’s center.

The 524 interfaith allies representing 20 faith traditions answered the Rev. John Floberg’s call for faith leaders to stand in solidarity and witness with those protecting the tribe’s land and water supply.

Floberg is the supervising priest of the three Episcopal missions on the North Dakota side of the Standing Rock Reservation; there are six more mission churches on the reservation in South Dakota.

Opponents, or “water protectors” as they prefer to be called, have for months camped in three sites on federal land, just south of the Standing Rock Sioux Nation’s reservation in south-central North Dakota. Native Americans representing 200 national and international tribes have camped alongside environmentalists and climate activists who’ve joined in their protection protest.

In his Oct. 23 call for solidarity, Floberg asked that 100 clergy from across the Episcopal Church join in the protection protests. By Nov. 3, the number surpassed 500. The official count of 524 is significant in that it represents the number of years since the Doctrine of Discovery gave Christian explorers the right to claim lands they discovered.

On the morning of Nov. 3 in the center of Oceti Sakowin Camp, Christian religious leaders from Episcopal, Lutheran, Presbyterian and other denominations and faiths – all representing denominations that have repudiated the Doctrine of Discovery – testified to their traditions’ rejection of the 15th-century document. When they finished, they asked tribal elders to come forward and asked that they burn a replica of the Doctrine of Discovery and the elders did so in pots and a bucket near the sacred fire.

“We had to do our business publicly before we could ever come out here and say we are standing in solidarity,” said Floberg, in an interview with Episcopal News Service later in the day. “We had to be as right as we could with the nations that are represented in that camp, and we don’t expect everybody to accept our apology, accept our renunciation, we have to live into that.”

One way Episcopalians and others can live into that is to ask the U.S. government to honor its land treaties with Native Americans, he said. The standoff near Standing Rock centers around two issues: water quality and sacred lands. 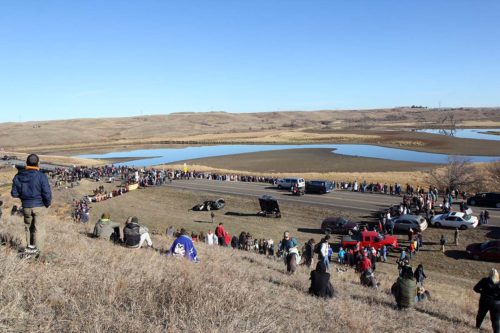 The interfaith witnesses formed a huge Niobrara Circle of Life just south of the Backwater Bridge where on the other side law enforcement officers kept watch. Opponents of the Dakota Access Pipeline have held the bridge since law enforcement on Oct. 27 cleared a newly set up protest camp. Photo: Lynette Wilson/Episcopal News Service

When Floberg issued the call to solidarity and witness to Episcopalians, he called it a “powerful opportunity to exercise our shared baptismal ministry.” As the passing of the peace made its way around the Niobrara Circle, Floberg explained what he meant.

“You hear a lot about law and order from the other side of that bridge, and I want to turn this conversation to the real rule of law which is that the United States of America has never fulfilled the treaty obligations of any treaty that it has ever made with any tribal nation,” Floberg continued.  “…so if we are going to say we respect, we are going to call our government to task and to accountability that as citizens we are going to speak from within and say we are not respected. And according to another identity that I have, a citizen of the kingdom of God, as a child of God, as a citizen there, I am calling upon this government to honor and fully fulfill [and redress] its treaty obligations.” 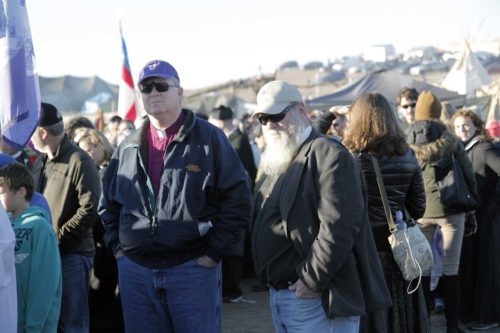 North Dakota Bishop Michael Smith, a member of the Potawatami Nation, said the burning of the 15th-century Doctrine of Discovery would help to further people’s understanding of a great evil that happened that at the time the church participated in it. Photo: Lynette Wilson/Episcopal News Service

The Standing Rock Sioux argue the pipeline would cross treaty lands, disturb sacred areas and threaten drinking water for 8,000 members who live on the tribe’s nearly 2.3 million-acre reservation, located just south of where the pipeline would cross under the Missouri River at Lake Oahe. The lake is the reservation’s drinking water source. The sacred sites fall outside the reservation’s boundaries, but the tribe argues they were part of an 1851 land treaty.

The Dakota Access Pipeline would carry up to 570,000 gallons of oil per day across 1,134 miles from the Bakken oil field in northwestern North Dakota through South Dakota, bisecting Iowa from its northwest corner to its southeastern corner to Patoka, Illinois, for transport to refineries. The Bakken field is the largest oil deposit discovered in the United States since Alaska’s Prudhoe Bay in 1968; the Bakken created an oil boom in North Dakota in 2008 which has since slowed. Bakken oil has been shipped by rail, a costlier alternative to pipelines.

Challenges to the proposed pipeline route began with Iowa farmers in 2014; a previous route that brought the pipeline closer to Bismarck, North Dakota’s capital and second largest city, was scrapped over concerns to protect the city’s drinking water.

On Nov. 2, President Barack Obama said the U.S. Army Corps of Engineers was considering an alternative route. An online petition is circulating to asking Obama to honor his commitment to protect the people of Standing Rock.

In September, federal officials stopped construction of the pipeline on lands bordering or under Lake Oahe belonging to the Corps of Engineers, the federal agency responsible for permitting on public lands and waterways. Since then, the Dallas, Texas-based Energy Partners, the company building the pipeline, has purchased private lands near the proposed route and continues construction on the pipeline. Some say the land belongs to the Sioux Nation, where opponents of the pipeline set up another protest camp. On Oct. 27, law enforcement cleared that camp and arrested 141 people. Since then, unarmed opponents of the pipeline have been in a standoff with law enforcement officers at the Backwater Bridge on Highway 1806, just north of the Oceti Sakowin Camp.

Last week’s arrests came on the same day antigovernment protesters were acquitted on federal conspiracy and weapons charges in the armed takeover of a wildlife refuge in Oregon. The protesters held the federally owned refuge for 41 days in early 2016. 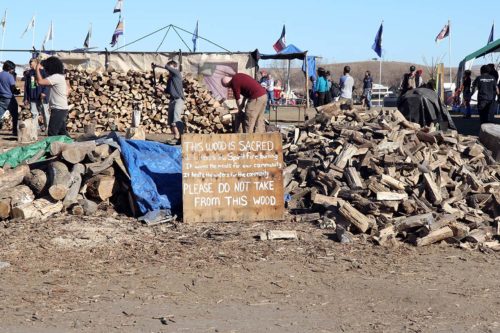 Firewood from this pile keeps the sacred fire burning around the clock in the center of the Oceti Sakowin Camp. Photo: Lynette Wilson/Episcopal News Service

After the interfaith allies witnessed the burning of the Doctrine of Discovery, they formed a single line and received a smudging, a ritual act of purification, as they exited the camp and reassembled on Highway 1806 to march toward the Backwater Bridge. There they spent hours sharing testimony and gathering in a Niobrara Circle.

California Bishop Marc Andrus attended with 10 Episcopalians from his diocese.

“I think we witnessed the end of an age,” he said with tears in his eyes, after the Niobrara Circle closed. “While we were here, by burning copies of the Doctrine of Discovery we were signaling an end to a past that has affected millions and millions of people. People who have been colonized and people who have been enslaved, but also the enslavers and the colonizers, it’s affected us all.” 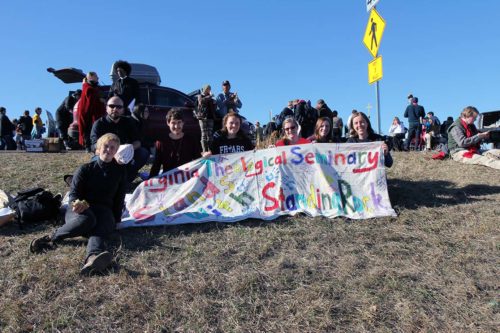 Floberg’s call, initially targeting Episcopalians, went far and wide, drawing Christians, Muslims, Jews and others. Judith Lee, a Buddhist from Colorado Springs, drove to North Dakota on her own to participate. Friends of Wendy Johnson, a writer and Zen lay teacher from San Francisco, California, paid for her to come. Sandi Carter, a member of Christ Church in Puyallup, Washington, drove 20 hours and slept in her car outside St. James’ Episcopal Church in Cannon Ball because there wasn’t enough space to sleep inside. She decided to make the trip on Sunday, after hearing the Rev. Brandon Mauai, an Episcopal deacon serving St. James’, speak about the protection protest near Standing Rock at the Diocese of Olympia’s convention.

Carter posted her intention to come to Standing Rock on Facebook, where her son saw it and called her. “I told my son, ‘I want my grandchildren to know that I stood for something,’” she said. 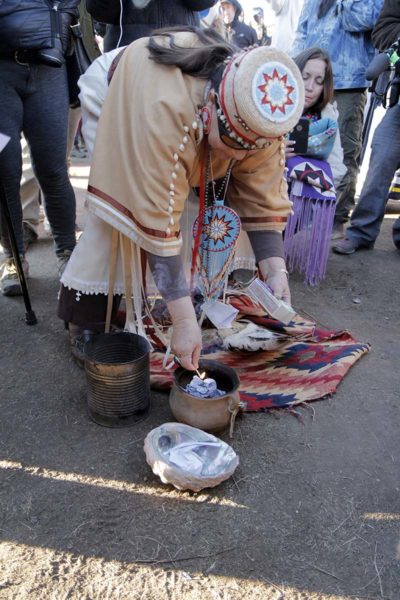 The cause has resonated with Episcopalians who have stood with the Dakota people since their exile from Minnesota during the U.S.-Dakota War of 1862. Presiding Bishop Michael Curry and his staff visited the Oceti Sakowin Camp in late September.

“It’s profound to see so many people of different faiths gathered to stand with the people of Standing Rock in their mission, which is to have their lands respected and water protected and to have indigenous people be consulted in the future … and [to] be equal partners in the determining of development that affects their life and their destiny,” said South Dakota Bishop John Tarrant.

The burning of the Doctrine of Discovery sent a strong message, said Mauai.

During the Nov. 2 briefing in the Cannon Ball Community Center, Floberg reminded participants that they signed a pledge to keep the Standing Rock events of Nov. 3 prayerful, peaceful, nonviolent and lawful. There were some who called for a more aggressive front-line approach elsewhere. Following the five-hour long day of testimony, marching and singing, some people left for Bismarck and a rally at the state capitol. The Bismarck Tribune reported 14-people were arrested.

–Lynette Wilson is an editor/reporter for Episcopal News Service.