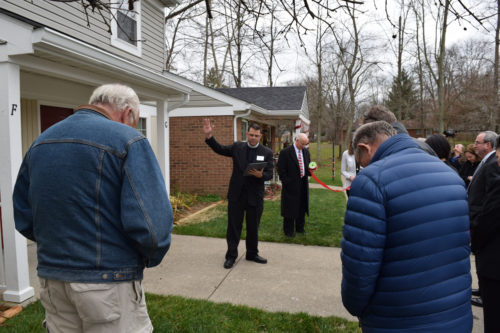 No longer able to afford the two-bedroom southern Ohio apartment she had shared with her late husband David, she moved in with her daughter and son-in-law but longed for a place of her own.

“It felt like I was being released from prison,” said Sears, 66, now in remission from the cancer. A resident of the Meadows for three years, her monthly rent of $250 is more manageable, and she also cherishes the community.

“The Lord spared me, that’s all I can say,” she told the Episcopal News Service recently. “Everyone here is friendly. Everyone helps each other.”

In approximately 12 million U.S. households, families spend more than half their annual income on housing and millions more spend above the 30 percent generally considered affordable, according to the Episcopal Church Office of Government Relations.

Now, some Episcopal Church congregations in Ohio and California are hoping community partnerships and creative housing initiatives can transform lives. 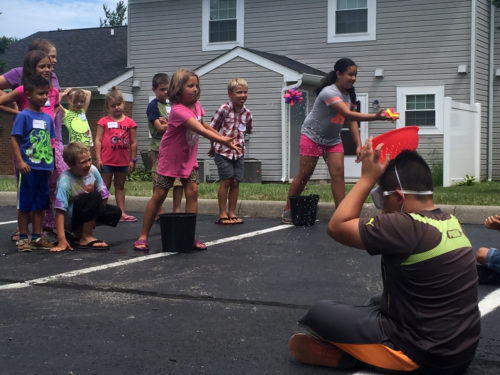 Restarting near Cincinnati: A ‘loaves and fishes’ approach
Witnessing a “second generation of the same family” move into its affordable housing, plus a much-needed renovation of those apartments, prompted St. Thomas Church to initiate “a restart,” according to the Rev. Darren Elin, rector.

The church joined the affordable housing fray about 27 years ago, creating Thomaston Woods, a 100-unit apartment community for individuals and families. Located in upscale Terrace Park, Ohio, yet bordering “the very start of Appalachia” in nearby Clermont County, the congregation has offered social and other services to more than 3,000 families while addressing growing issues of homelessness and poverty. Later St. Thomas added a community center and then Thomaston Meadows, the 13-unit apartment community for low-income seniors.

“We’ve continued to develop the idea that what is needed is more than housing, but ministry, whatever is necessary to change lives,” Elin said.

Aided by Episcopal Retirement Services of Cincinnati, the restart included renovation of the Woods and Meadows last year “and the community center renovation is finishing up this year,” he said.

In the process St. Thomas assisted some 46 residents to become homeowners and began establishing a network of ecumenical partnerships, such as services coordinated by Lutheran social workers and partnering with Habitat for Humanity, he said.

“God calls us to do more than just provide a shelter … [he] calls us to help build a home, … to be a catalyst for real transformation,” Elin said. 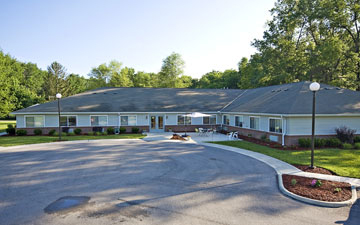 Episcopal Retirement Services is partnering with other congregations and agencies in Ohio, Kentucky and Indiana and hopes to expand other partnerships throughout the Midwest, Kathy Ison-Lind, vice president of affordable housing and in-home services, said in a statement on organization’s website.

Ten years ago the agency had one retirement community for limited-income seniors; today they have 20 in various stages of development, she said.

Elin said that St. Thomas is currently anticipating its next step, envisioned as a “scholar house” on another parcel of land.

“It would allow single parents who are full-time students to have fully subsidized or greatly subsidized housing plus child care as long as they maintain [good] grades and participate in programs about parenting support and personal finance,” he said. “They would be able to stay up to six months after graduation. It is designed to combat the poverty cycle we’ve experienced,” he said.

“It is the story of the loaves and fishes – how do you live out limited resources? You take it and bless it and ask God to use it, and you get other partners at the table and you get more.”

“St. Paul’s is surrounded by million-dollar town homes and condos in the midst of a growing homeless population. Most people who make under $100,000 cannot afford a home in Walnut Creek. Teachers, dental assistants, nurses, sales clerks, restaurant workers and others cannot afford to live in the city in which they work,” said St. Paul’s rector, the Rev. M. Sylvia O. Vasquez, in an email to ENS.

Donna Colombo, executive director of the Trinity Center, said the vision for affordable housing grew by asking the questions: “What if? How? Why not?”

“It wasn’t that we didn’t know about the lack of housing, affordable housing,” Colombo said. “We were so focused on serving people meals and housing the homeless population for two weeks every winter in our church, giving people clothes and blankets, that we really didn’t focus on seeing affordable housing as a ministry. We thought, somebody else should be doing that: it isn’t our ministry, we don’t build buildings.”

Then she and Vasquez walked the property “and we saw our dilapidated building and we saw the community growing and growing. We said, ‘Something’s got to be done about this.’

“We agreed we needed to find out. We did a feasibility study. We went to town hall meetings, to local planning meetings and to the city council and we tried to find out what the plans were … to make sure affordable housing was addressed for the low-income and the homeless.”

It took some convincing for St. Paul’s parishioner Richard Kemik and others to warm up to the development that became St. Paul’s Commons.

“I wasn’t convinced at first that I wanted the church to do that,” said Kemik, a member of the St. Paul’s Commons Committee, which helped plan the affordable housing residence. “It’s a big step, taking part of your (church) property and letting someone use it for 60 years.”

But, “I started listening and talking,” he said. “They created a committee to explore those options after it was presented to the church and I said, yes, I think for this specific project that it was the right thing for St. Paul’s to do.”

Partnering with Resources for Community Development, a Berkeley-based developer whose mission is to develop affordable housing for very low-and low-income individuals and families, greatly aided the church in securing funding, Kemik said.

Colombo said, “We spent a lot of time addressing concerns and meeting with neighbors,” last year when the center housed a winter emergency shelter. Shelter guests were asked not to bring shopping carts into the area after the meetings. “That seemed to reduce the anxiety of neighbors. They were concerned about police being called to the area also, but we explained to them that a lot of times when the police are called, it is because someone needs help or are having personal issues.” When St. Paul’s Commons was proposed, the project received widespread community support.

The center is hosting the Nov. 12-March 30 winter shelter at another location this year, she added. “We worked through the issues. It went beautifully; we even got thank you letters at the end.”

With approval and a $5 million commitment from city officials, the church plans to break ground in 2017 and to complete the project a year later, according to Charles Couch, a member of the committee overseeing it. Additional funding still needs to be secured.

“They’re asking, ‘Can you come and tell us what you are doing?’ I tell them there’s lots of ways to do this. We’re doing apartments, but you could do group homes, senior homes. We just talk to people. We suggest they start with discernment. Start small. Grow slow. Get others involved.”