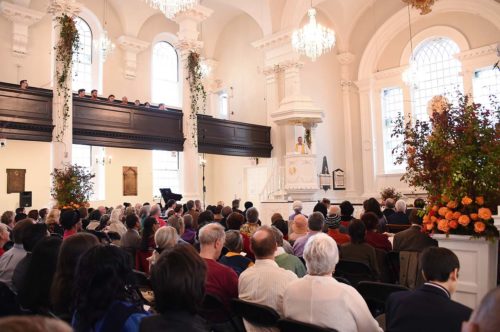 [Episcopal News Service] Two hundred and fifty years to the day it opened its doors in Lower Manhattan in what was then the countryside, St. Paul’s Chapel celebrated its anniversary with a special worship service and setting off a yearlong celebration.

“I’m sure he was imagining in his heart all the work that would be required to see God and that this chapel would become a workshop for ministry, a place to hold the prayers and aspirations of the generations that were to come,” said Lupfer, and since that time. “Imagine the prayers that have been in these walls.

From there, 350 people present took a moment to imagine those prayers.

For 250 years, St. Paul’s Chapel, part of Trinity Church Wall Street parish in Lower Manhattan, has stood as a symbol of faith, endurance and social good.

Trinity Wall Street’s “Chapel of Ease,” as it was called when it opened, catered to the city’s growing population. It is now the oldest surviving church building in Manhattan and the only one to remain in continuous use since Colonial days.

Following his inauguration as the first president of the United States, George Washington and his cabinet walked the half-mile from Federal Hall to worship at St. Paul’s Chapel. It withstood the great fire of 1776, which destroyed 500 buildings in a single night, including Trinity Church. And it withstood the Sept. 11, 2001, terrorist attacks, which destroyed the World Trade Center’s Twin Towers less than a block away and killed 2,606 people. Immediately following the attacks on the World Trade Center, St. Paul’s Chapel became a staging area and respite for first responders at ground zero and continued in that ministry about nine months following the attacks. It later served as a memorial, where mourners, tourists and others continued to come over the last 15 years.

The historic chapel at Broadway and Fulton streets, recently underwent renovation to restore it to its 18th-century appearance. The interior was painted with 500 gallons of the historically appropriate colors of natural cream, white dove and deep caviar. The crystal chandeliers crafted by artisans more than 200 years ago were cleaned. The original statue of St. Paul carved from tulip poplar, which overlooked Broadway from a niche on the outside of the chapel for more than two centuries, has been conserved and moved indoors to the southeast corner of the sanctuary. (A weather–resistant resin replica stands outside.)

Inside, a new exhibit will explore St. Paul’s 250 years and the diverse ministries of the chapel, particularly those of reconciliation and healing.  As part of that telling, a new 9/11 Chapel of Remembrance has been created and will offer visitors a place of reflection with artifacts on display that recall the volunteer ministry the parish hosted to care for Ground Zero’s rescue and recovery workers.

Click here more at about St. Paul’s Chapel and see a full schedule of 250th-anniversary events.