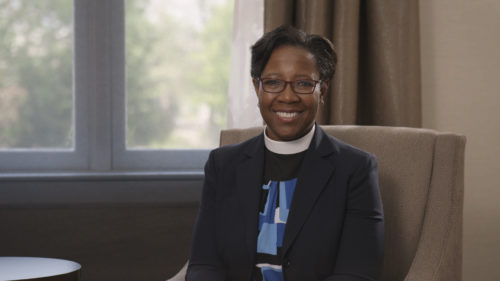 Baskerville-Burrows, 50, is the first African-American woman elected to be a diocesan bishop in the Episcopal Church.

She was elected with 67 votes in the clergy order and 82 in the lay order.

Her election culminated a nearly two-year discernment and search process by the diocese at the 179th diocesan convention. The Rt. Rev. Catherine M. Waynick plans to retire in the spring of 2017.

The other four nominees were:

Further information about the bishop search and the nominees is available here.

Baskerville-Burrows currently serves as director of networking for the Episcopal Diocese of Chicago, nourishing partnerships and connections for church revitalization.

“In 19 years of ordained ministry, and especially in the past five helping to oversee and restructure the Diocese of Chicago, I’ve supported communities of transformation, communicated a vision of hope and gathered and networked God’s people across distance and difference,” Baskerville-Burrows said. “I believe these experiences have prepared me to lead and serve in the particular place that is the Diocese of Indianapolis.”

She is from New York, ordained by the Diocese of Central New York, and a graduate of Smith College, Cornell University and the Church Divinity School of the Pacific. She has expertise in historic preservation and a passion for issues including gun violence, social justice, and racial and class reconciliation. She also maintains a strong focus in guiding others through the practice of spiritual direction.

One of the defining experiences of her ministry came when she found herself near the World Trade Center the morning of September 11, 2001. In the midst of a fearful situation, her own faith and the faith of others who sought shelter alongside her gave her a renewed perspective of faith vanquishing fear.

“The Episcopal Church is where I found my relationship with Jesus some 30 years ago, “she said. “It teaches me that the world is filled with incredible beauty and unspeakable pain and that God is deeply in the midst of it all loving us fiercely. So each day, nourished by the sacraments and stories of our faith, the beauty of our liturgical tradition, the wide embrace of this Christian community, I learn over and over again how to live without fear.”

Pending the canonically required consent of a majority of the Episcopal Church’s diocesan standing committees and bishops with jurisdiction, Baskerville-Burrows will be ordained and consecrated as bishop of the Diocese of Indianapolis on April 29, 2017, at Clowes Hall at Butler University.