[Episcopal News Service] The Episcopal Church is amplifying the call of the Episcopal community on the Standing Rock Sioux Nation in North Dakota to stand in solidarity and witness with those protecting the tribe’s land and water supply. 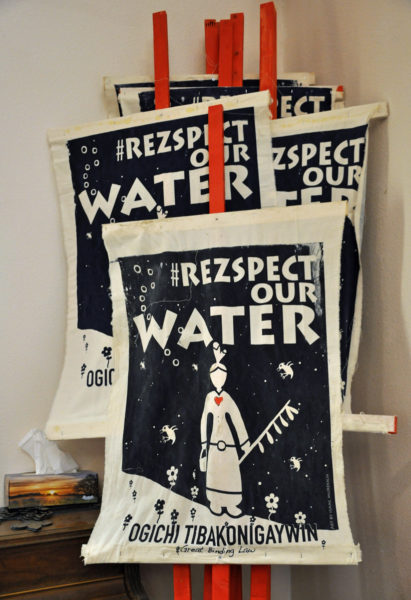 Signs from an early action stand stacked in a corner at St. James Episcopal Church in Cannon Ball, North Dakota, near the epicenter of opposition to the Dakota Access Pipeline. Photo: Mary Frances Schjonberg/Episcopal News Service

The Rev. John Floberg, supervising priest of the Episcopal churches on the North Dakota side of Standing Rock, has appealed for clergy and laity around the Episcopal Church to come together on the banks of the Missouri River in North Dakota to stand in witness and solidarity on Nov. 3. The current construction route of the Dakota Access Pipeline would run under the river, which is the Sioux Nation’s water supply; over its treaty lands and through sacred areas.

In a statement issued Oct. 28, the Church said Floberg’s appeal came because he and others in North Dakota are “concerned by the increased repression of non-violent water protectors whose ranks include men, women and youth.” The statement also noted that the appeal is “supported by the wisdom of Standing Rock Sioux Chairman Dave Archambault II.”

The Nov. 3 action “is being designed to be peaceful, to be prayerful, to be nonviolent and to show the church’s solidarity with the Standing Rock Sioux Tribe’s struggle,” Floberg told Episcopal News Service.

Since Floberg issued the call on Oct. 23 via email and Facebook, more than 100 clergy have said they would participate, half of them Episcopalians. One hundred clergy was Floberg’s original goal. “That is extremely humbling and I am extremely grateful that the Episcopal Church is answering the call,” he said.

The churchwide support of Floberg’s appeal is rooted in the Church’s continuing support of the protection effort since shortly after it began in earnest in August. That includes last week’s request from the Church’s Executive Council that law-enforcement officials “de-escalate military and police provocation in and near the campsites of peaceful protest and witness of the Dakota Access Pipeline project.”

The Church’s support of the witness appeal comes the day after some pipeline opponents in a recently formed camp were forcibly removed from a camp. The camp was set up Oct. 22 near Highway 1806 and outside of the existing camps on U.S. Army Corps of Engineers land near the Missouri River. 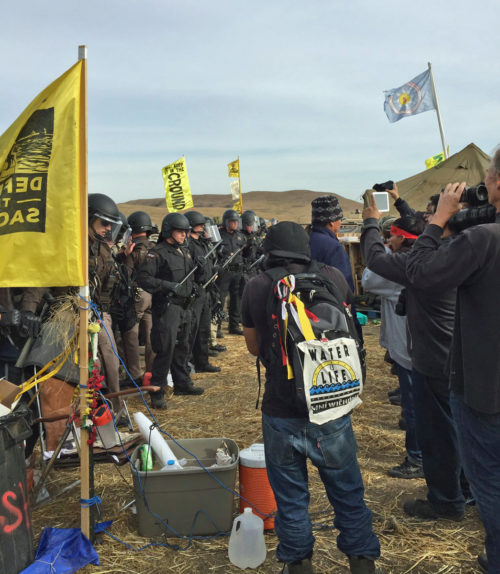 Law-enforcement authorities form a line Oct. 27 as they prepare to evict a new camp of Dakota Access Pipeline opponents from the sides of Highway 1806. Photo: Caroline Grueskin via Twitter

The Morton County Sheriff Department led that action after, it said, its attempt to negotiate with occupants of the new camp failed. Department officers and other law-enforcement officials used, among other things, “a long range acoustic device which sends a high-pitch warning tone” to “control and disperse the crowd of protesters.” Social media reports said the authorities, some of whom were armed with long batons, also used pepper spray and fired small bean bags at protestors.

Sheriff Kyle Kirchmeier called the new camp “a public safety issues” because people were blocking county roads and state highways, as well as trespassing on private property. The private land was recently sold to the construction company but the land is also claimed by some as land belonging to the Sioux Nation. And, the ability of nonfamily corporations to own or operate North Dakota farm and ranch land is currently in dispute, further clouding the issue.

The department said late on Oct. 27 that 141 people were arrested during the action to clear the camp and remove a roadblock on a nearby county road. “Officers met violence and resistance including a protester who fired a gun at officers in the police line, protesters who threw Molotov cocktails at them and set vehicles and debris on fire,” the department said.

One supporter of the police action said on the department’s Facebook page that it was good that officials were cleaning out the “vermin.” 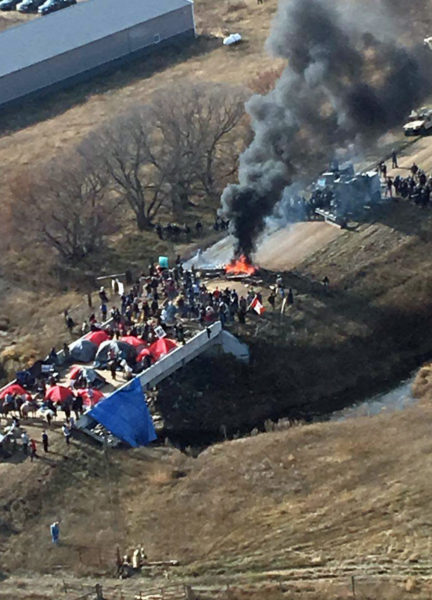 As the police action was unfolding the Standing Rock Sioux Tribe said it was praying for peace and asked that the police “ensure everyone’s safety.”

“We also call on the thousands of water protectors who stand in solidarity with us against DAPL to remain in peace and prayer,” the tribe said in the statement. “Any act of violence hurts our cause and is not welcome here.”

Floberg echoed that concern, saying that hours before the Morton County sheriff acted he had come across a roadblock on Highway 1806 consisting of a Chevrolet Suburban and a large log. He told U.S. Bureau of Indian Affairs officials about it because 1806 is the main north-south highway in the area and a roadblock would prevent ambulances from reaching communities off the highway. The roadblock was later removed without incident, he said.

“What the church and our ministry at Standing Rock is trying to do today is to be standing on the rock of what in this is not shifting and moving, and we are trying to get ourselves to that because the violence that erupted yesterday is not something that can be repeated,” he said. “It’s going to cost somebody their life.” 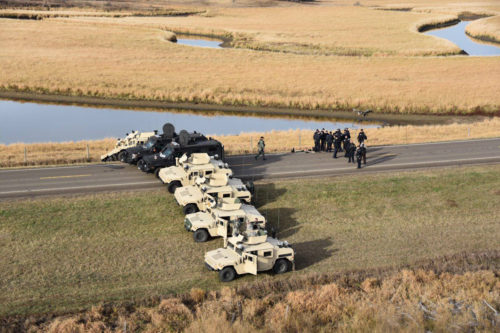 That unmoving place is the rock of prayerful, peaceful and nonviolent action, he said. It is also about supporting the Standing Rock Sioux Nation’s desire to have access to clean water. The Sioux also want to protect the sacred area around the Missouri River, inhabited since at least the 1300s, where Native survivors of the Sept. 3, 1863, Whitestone Hill Massacre crossed the river into what is now Cannon Ball, North Dakota, and where the Sioux traded regularly with neighboring Mandan, Hidatsa and Arikara tribes, despite sometimes being in conflict, Floberg said. More information about the site is here.

Finally, the protection action is not just aimed at the present, he said, but rather for the future “seven generations” and the “children that we will never know.”

The disputed 1,154-mile pipeline will run from the Bakken oil fields in northwest North Dakota to Patoka, Illinois, carrying as much as 570,000 barrels of oil a day. Energy Transfer Partners, the Dallas-based company building the pipeline, says construction will create 8,000 to 12,000 local jobs, while the AFL-CIO has pegged the number at 4,500. The construction company also says the pipeline will provide a “more direct, cost-effective, safer and environmentally responsible” way to transport oil and reduce the current use of rail and truck transportation