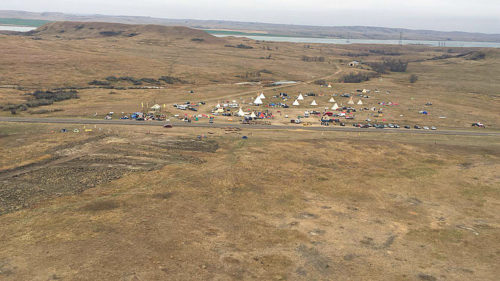 Some Dakota Access Pipeline opponents Oct. 22 moved out of the camps on U.S. Army Corps of Engineers land to set up a new camp and two roadblocks on private land. Some of the protestors say the land actually belongs to the Standing Rock Sioux Nation. The Missouri River, which opponents fear could be polluted by the pipeline, is in the background at top. Photo: Morton County Sheriff Department via Facebook.

When contacted by KFYR, Justice Department spokesman Wyn Hornbuckle also told the television station that the department “will not authorize constructing the Dakota Access Pipeline on Corps land bordering or under Lake Oahe” while the Army Corps of Engineers reviews issues raised by the Standing Rock Sioux and other tribal nations. He added that in the interim the departments of the Army, Interior and Justice “have reiterated our request that the pipeline company voluntarily pause all construction activity within 20 miles east or west of Lake Oahe.”

Lake Oahe is the dammed section of the Missouri River just a half-mile from the reservation under which the pipeline is routed to run. The river is the water supply for the 8,000 members who live on the tribe’s nearly 2.3 million-acre reservation. The tribe, and its supporters, say the pipeline is also due to cross over its treaty lands and through some of its burial places.

The Episcopal Church has supported the tribe’s opposition to the pipeline since early in the protest actions.

The 1,154-mile pipeline will run from the Bakken oil fields in northwest North Dakota to Patoka, Illinois, carrying as much as 570,000 barrels of oil a day. Energy Transfer Partners, the Dallas-based company building the pipeline, says construction will create 8,000 to 12,000 local jobs, while the AFL-CIO has pegged the number at 4,500. The construction company also says the pipeline will provide a “more direct, cost-effective, safer and environmentally responsible” way to transport oil and reduce the current use of rail and truck transportation

Archambault told Lynch that “state and local law enforcement have increasingly taken steps to militarize their presence, to intimidate participants who are lawfully expressing their views, and to escalate tensions and promote fear.”

Saying that “too often these kinds of investigations take place only after some event regarding excessive force by the police has led to a well-publicized tragedy,” he wrote “I hope and pray that you will see the wisdom of acting now in an effort to prevent such a tragedy here.”

In fact, some out-of-state law-enforcement agencies that have sent reinforcements to assist the Morton Country Sherriff Department in policing the action are withdrawing those officers or facing protests at home over their involvement.

The sheriff of Dane County, based in the Wisconsin capital of Madison, ended his department’s participation in the policing action a week ago. Sheriff Dave Mahoney said that after talking with “a wide cross-section of the community who all share the opinion that our deputies should not be involved in this situation”

The original plan was to rotate three teams of deputies Sunday-to-Sunday over three weeks, according to a report in the Wisconsin State Journal. Mahoney said reduced reimbursement of costs also played a part in the decision.

Madison Alderwoman Rebecca Kemble traveled to Morton County over the Oct. 8-9 weekend to present the Standing Rock Sioux Nation with a parchment copy of a recent City Council resolution expressing solidarity with those protesting the pipeline. Kemble told the newspaper she was acting as a legal observer, recording video of a ceremony featuring prayer, drumming and dancing, when she was grabbed and arrested. The Morton County Sheriff’s Department characterized the incident as a riot, which Kemble disputed.

In Minnesota, hundreds of demonstrators protested in downtown Minneapolis Oct. 25, demanding that Hennepin County Sheriff Department officers not continue sending equipment and personnel to Morton County. The North Dakota request for out-of-state aid was made under the Emergency Management Assistance Compact, a national mutual aid agreement among law enforcement and public safety agencies.

Meanwhile, the National Lawyers Guild, in conjunction with the American Civil Liberties Union of North Dakota, has made federal Freedom of Information Act and North Dakota Open Records Act requests to multiple state and federal agencies in response to the surveillance and arrests of the protestors attempting to stop construction of the Dakota Access Pipeline.

Opposition to the pipeline action has attracted the attention of a growing number of celebrities and activists, including Mark Ruffalo, Susan Sarandon, Leonardo DiCaprio, Shailene Woodley, Al Gore and Jesse Jackson Sr., as well as from organizations such as the United Nations Working Group on Indigenous Populations.

On a day when 126 people were arrested for “illegal protest activities” during a day of often-violent encounters with those protesting the pipeline the Episcopal Church’s Executive Council asked that law-enforcement officials “de-escalate military and police provocation in and near the campsites of peaceful protest and witness of the Dakota Access Pipeline project.”

The arrests occurred Oct. 22 after a group of protestors, or “protectors” as they prefer to be called, went to a Dakota Access Pipeline construction site and began to set up a new camp and road block near Highway 1806. The private land was recently sold to the construction company but the land is also claimed by some as land belonging to the Sioux nation.

During a video news conference on Oct. 26, a Morton County deputy said that “we have the resource, we have the manpower to end this right now” but, he said, they “reached out” to protestors earlier in the day to ask them to move back to the Seven Councils camps, which are located on U.S. Army Corps of Engineers land and to let the legal system and the federal government resolve the issue.

The deputy, who did not give his name, said the protestors at the new camp were told earlier in the day: “You have your point. The world knows you don’t want this pipeline to go through.” He said that the protestors who he said “talk about being peaceful and prayerful” were told they ought to return to their original camps and “engage the process.”

He also objected to out-of-state protestors whom he portrayed as trespassers “telling us how we should do things in North Dakota.”

“We keep getting portrayed as the jack-booted thugs coming down for a confrontation,” he said, adding that the only time we’ve engaged with them is when they are breaking the law,” such as when they trespass on private property or “assault other people.”

Protestors have complained of excessive use of force, unnecessary arrests and, in some cases, strip searches of female protestors in the presence of male law-enforcement officers.

Presiding Bishop Michael Curry said on Oct. 21, the day council passed the resolution, that the Church took a stand on the Dakota Access Pipeline project, not because of the question of whether oil should be used as an energy source. “The issue here is that decisions were made which adversely affect Native communities – the Sioux reservation itself – when there may have been other alternative ways to accomplish the same thing.”

During his sermon at the council’s Eucharist, Curry called the protest “a struggle for human decency” that is “not just a social struggle, because the souls of the children of God are at stake.”

“This is a spiritual struggle, it’s a gospel struggle,” he said.

Most major Christian denominations have come out in support of the Sioux Nation’s opposition, as have nearly 300 tribes. Evangelical Lutheran Church in America Presiding Bishop Elizabeth A. Eaton was scheduled to be in the Oceti Sakowin Camp on Oct. 26.

The Rev. John Floberg, supervising priest of the Episcopal churches on the North Dakota side of Standing Rock, is recruiting at least 100 ordained people for a day of “united clergy action,” now scheduled for Nov. 4, to show both the tribe and law-enforcement officials that clergy are standing with Standing Rock.