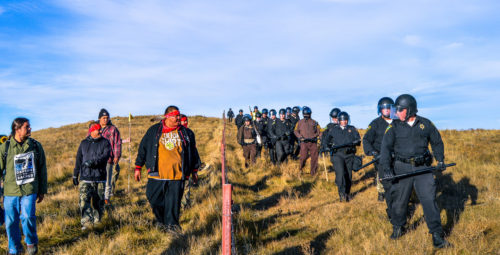 Apparently unarmed pipeline opponents march on the other side of a fence line from armed riot police near the construction site. Photo: Rob Wilson Photography via Facebook

[Episcopal News Service] The coming winter and changing attitudes on the part of some Dakota Access Pipeline project opponents and law enforcement officials near the Standing Rock Sioux Nation are changing the Episcopal Church’s ministry in that part of North Dakota.

Episcopalians spent part of Oct. 24 driving church vans around the state picking up protestors who had been arrested over the weekend. A planned camp move will put a winter protest camp close to an Episcopal church that will be able to bring even more services to campers. 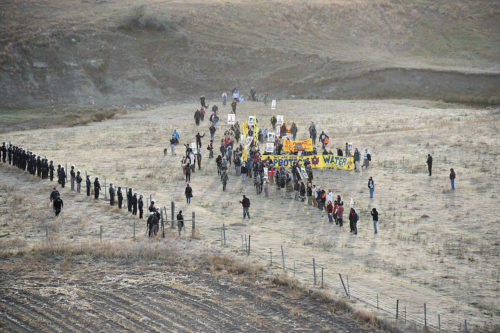 Dakota Access Pipeline project opponents and law enforcement officers face off with a fence between them near a pipeline construction site. Photo: Morton County Sheriff Department via Facebook

The Oct. 22-23 weekend was a heated one near the proposed pipeline route. The Morton County Sheriff Department said Oct. 24 that 126 people were arrested two days earlier for “illegal protest activities” during a day of often-violent encounters with those protesting the pipeline that will run under the Standing Rock Sioux’ water supply, over its treaty lands and through some of its burial places. One person was arrested on Oct. 23, the department said, bringing the total number of arrests to 269 since the protest started Aug. 10.

Some pipeline opponents, who prefer to call themselves “protectors,” seemed to “have upped the ante and got themselves in place to block construction,” the Rev. John Floberg, supervising priest of the Episcopal churches on the North Dakota side of Standing Rock, told Episcopal News Service Oct. 24. The authorities, he added, responded with what he called “overwhelming force.”

“From my side of this, the authorities have always been provocative and excessive, and the people that are doing their protection acts are getting pushed to take a harder stand that is still non-violent,” said Floberg in a telephone interview as he drove a church van to Fargo, North Dakota, about four hours to the east of the camps to collect some of the protestors who were taken there for arraignment. 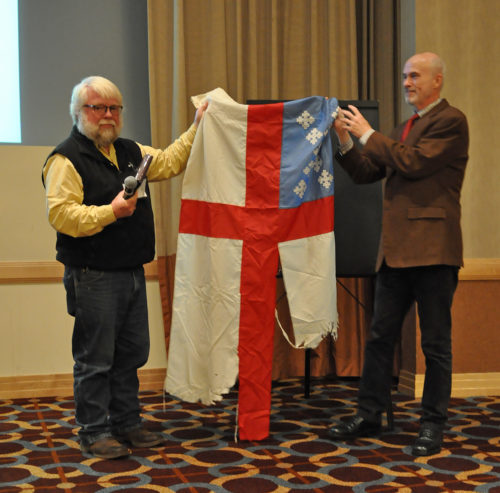 “This flag has flown so proudly,” in part because it was the only Christian church flag at the Dakota Access Pipeline camp in North Dakota, the Rev. John Floberg told Episcopal Church Canonical Archivist Mark Duffy, right, as he presented the flag to his care. “And we hate to give her up,” Floberg added, his voice faltering. Photo: Mary Frances Schjonberg/Episcopal News Service

Floberg’s trip to Fargo Oct. 24 was one of two trips the Episcopal Church on Standing Rock was taking that day to bring protestors back to the camps. People arrested were taken to six locations around the vast state of North Dakota for processing, Floberg said. “And of course they don’t get offered a ride home,” he added.

The Bismarck Tribune reported that the sheriff department said four protesters flattened the tires of a vehicle that had been driven onto the construction site and then attached themselves to the vehicle. Two of them were attached to the outside of the vehicle, and one to the steering wheel. The fourth person had put an arm through a hole in the door and had his hand encased in a bucket of hardened cement. All four were released from the vehicle and then arrested.

The newspaper said between 200 to 300 protesters marched during the early morning hours to a Dakota Access Pipeline construction site and began to set up a new camp. The private land was recently sold to the construction company but the land is also claimed by some as land belonging to the Sioux nation.

“This is being termed a riot today because the individuals know they are criminally trespassing,” said Capt. Bryan Niewind, of the North Dakota Highway Patrol, according to the Bismarck Tribune. “They are creating chaos for law enforcement. They are creating a dangerous environment for us when you have people attaching themselves to equipment.”

Law-enforcement officers, some dressed in riot gear and one with a rifle, wait Oct. 22 as others cut through a ranch fence to get nearer to protestors. Photo: Rob Wilson Photography via Facebook

Photographs of the Oct. 22 actions in the Tribune and on various Facebook sites show variously uniformed police in riot gear holding long batons, rifles and fire extinguisher-sized canisters of pepper spray. At least one apparently armored vehicle can be seen. Pepper spray was used because “we want to use the most nonlethal method possible,” Rob Keller, a spokesman for the Morton County Sheriff’s Department, told the newspaper.

On Oct. 23, the sheriff’s department said that protesters “attacked a helicopter with a drone, fired arrows at a helicopter, established an illegal road block on Highway 1806 and illegally occupied private property moving in tents and teepee’s (sic) to a DAPL construction site.”

Floberg said law-enforcement officers fired their guns at the drone. “That’s shots fired in the air and you don’t know where those bullets are coming down,” he said. “That’s provocative action as well.” 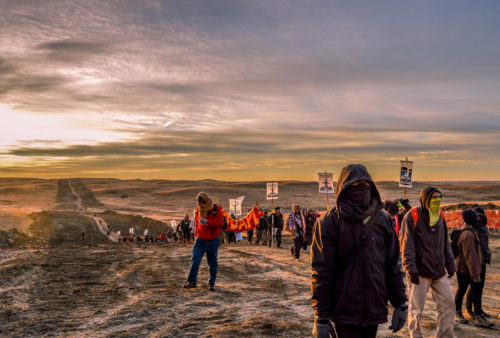 Dakota Access Pipeline project opponents, in an effort to reach protestors locked to a vehicle at a construction site, march down a path carved by the construction company through sacred ground. Photo: Rob Wilson Photography via Facebook

Morton County Sheriff Kyle Kirchmeier said at an Oct. 24 news conference that the law-enforcement presence near the protestors’ camps and near the pipeline route will soon increase. He said personnel from Indiana, Minnesota, Nebraska, South Dakota, Wisconsin and Wyoming responded to his request for help. Officers from other North Dakota counties and the state highway patrol are already helping Morton County.

Authorities have closed sections of Highway 1806, the main north-south road through the reservation. Niewind said at the news conference that the road was not safe because of increased protest activity.

On Oct. 22 Floberg and his colleagues on the Episcopal Church’s Executive Council asked federal and state officials to “de-escalate military and police provocation in and near the campsites of peaceful protest and witness of the Dakota Access Pipeline project.”

The council resolution is rooted in the Episcopal Church’s support of the Standing Rock Sioux Nation in its struggle against the pipeline. That support has come from Presiding Bishop Michael Curry both in words and his presence with the protestors as well as visits by Heidi J. Kim, Episcopal Church staff officer for racial reconciliation; the Rev. Charles A. Wynder Jr., staff officer for social justice and advocacy engagement; the Rev. Heather Melton, United Thank Offering staff officer; and the UTO board.

After the violent weekend, Floberg began recruiting at least 100 ordained people for a “united clergy action,” now scheduled for Nov. 4, to show both the tribe and law-enforcement officials that clergy are standing with Standing Rock.

“It’s also for those engaged in the protest to see that clergy are bearing a witness of non-violent peaceful protest,” he said.

Clergy participants will be trained before the protests in “how to walk up to the line and not cross it.”

“What I have made very clear is that in every statement that has been made, no matter what denomination has made that statement, the solidarity is with the Standing Rock Sioux tribal chairman and council,” he said. “We are going to follow their lead in whatever it is that we do. It is not a statement of solidarity with the camps; we never declared that.”

Floberg acknowledged that the camps have been criticized for their lack of unified leadership. “And people have stepped beyond the bounds of what the Standing Rock Sioux tribe has said that they wanted done and or not done, so we’re trying to reinforce the chairman’s position,” he said of the clergy action, explaining that the tribe’s position calls for protest against the pipeline along with the acknowledgement that the pipeline will be stopped through efforts in court and in other government arenas.

The nature of the camps is about to change. Floberg told ENS during the Executive Council meeting that the Sioux tribal council voted Oct. 19 to invite the campers in the Oceti Sakowin Camp to come to what is now being called Winter Camp on reservation land two miles south of the current location and near St. James’ Episcopal Church in Cannon Ball, North Dakota. When the tribe asked the Cannon Ball community to consider taking in the camp, the church hosted the meeting – and supplied supper – for residents to discuss the issue.

The Oceti Sakowin Camp, of Camp of Sacred Stones, spreads out along the north side of the Cannonball River on the Standing Rock Sioux Reservation. This is the view from Facebook Hill, where media have gathered, where people can charge their electronic devices at a mobile solar panel truck and where one can sometimes get a cell phone signal. The tribe has invited people to leave this camp for the winter and camp on reservation land two miles to the south. Photo: Mary Frances Schjonberg/Episcopal News Service

One benefit of the move, Floberg said, is that tribal police will have jurisdiction over the area. Earthen lodges are being proposed and he will offer the church’s mini excavator, purchased via a sustainability grant from the Episcopal Church’s budget, for use in camp construction.

The proposed 50-acre site is near a cell tower. Floberg, who has been practicing a ministry of presence with protestors for months, said the camp is expected to be able to accommodate 500 people, most of them non-reservation residents. Because that number is much smaller than the thousands that have been at the other camps, Floberg said, campers will be asked to rotate out of the camp so that as many people as possible “can come and join in the solidarity.”

“We will turn our multi-purpose space that is the church into a place where people can have social time, they can have movies,” he said of St. James’. “We will continue to respond to human needs as they are presented to us and as other sources can’t assist.”

And, Floberg said, St. James’ will no doubt have a Christmas party “like we’ve never done before.”