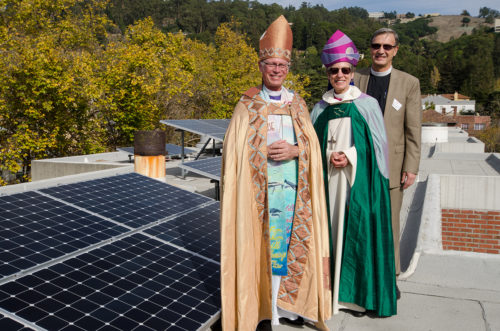 [Episcopal News Service] Harnessing energy from the sun is expected to save Church Divinity School of the Pacific $120,000 annually.

Earlier this year, the Berkeley, California-based Episcopal seminary installed solar panels on Easton, Parsons and Shires Halls. It’s the largest solar installation of any theological seminary in the United States.

“When American Solar came out and looked at our flat roofs with basically 100 percent southern exposure they were blown away by how effective this is going to be on our campus,” said seminary Dean and President W. Mark Richardson, during an interview with Episcopal News Service earlier this year.

On Oct. 22, former Presiding Bishop Katharine Jefferts Schori, St. Margaret’s Visiting Professor of Women in Ministry at CDSP, and Bishop of California Marc Andrus lead a liturgy to bless and dedicate the solar panels at the end of a daylong conference exploring the church’s response to the crisis of climate change.

The solar panels move the seminary toward energy independence, and the project itself is also a way to teach and empower students who were involved in the decision-making process to think about ways to mitigate climate change when they graduate, said Richardson.

The leadership at CDSP involved students in the solar installation process from the start. Including walking students through determining the project’s feasibility, the request for proposals, how to secure the necessary legal contracts, setting a timetable for build-out; the skills seminarians will need in the community, said Richardson.

Through a dashboard, students will be able to track the effectiveness and energy-saving capacity of the solar panels.

In December 2015, Richardson and Andrus were among those who represented the Episcopal Church and Presiding Bishop Michael Curry at the United Nations climate talks in Paris where negotiators reached a comprehensive agreement on climate change.

The Paris Agreement calls on countries worldwide to limit carbon emissions. Limiting carbon will require a decreased dependence on fossil fuels and an increase in reliance on renewable energy sources. CDSP’s solar panels show what efforts nongovernmental institutions can make toward helping the world shift toward renewable energy.

“CDSP is going off of one grid – the grid of life lived by extraction and ever-increasing consumption – and consciously becoming part of a network, that of life lived sustainably and in communion,” said Andrus, in an email to ENS. “CDSP is making a profoundly spiritual shift, towards wholeness.”

So far, 84 of 197 parties, including the United States, have ratified the Paris Agreement, which calls on not just nations, but state and local governments, and nongovernmental institutions, including religious organizations, to make an effort to prevent the worst effects of climate change.

As retired Archbishop of Cape Town Njongonkulu Winston Hugh Ndungane said of the church in Africa, “‘There is no better means of delivering social services than the church, as we have an “outlet” in every village.’ Look at how the Episcopal Church is one body, with some 5,000 ‘outlets’; our impact for helping prevent climate disaster is potentially enormous,” he said.

Of the Diocese of California’s 81 congregations, 30 percent have installed solar panels. The goal, Andrus added, is to install solar panels on all of the diocese’s churches and diocesan buildings.

Berkeley sees an average 256 days of sunshine a year, and like nearly every region of the United States, “solar power generation makes abundantly good sense,” said Jefferts Schori, in an email to ENS.

“The installation of this solar array on the campus of CDSP will provide a major boon to the annual budget, lessen the demand for electricity produced from fossil fuel and reduce the need for future power plants,” she said. “Christian seminaries have long claimed their grounding in the Son of God who brings light to the world. How better to enact this in a sacramental witness to the interconnectedness of all creation?

“CDSP is offering the world an outward and visible sign of the spiritual grace abounding in this community.”