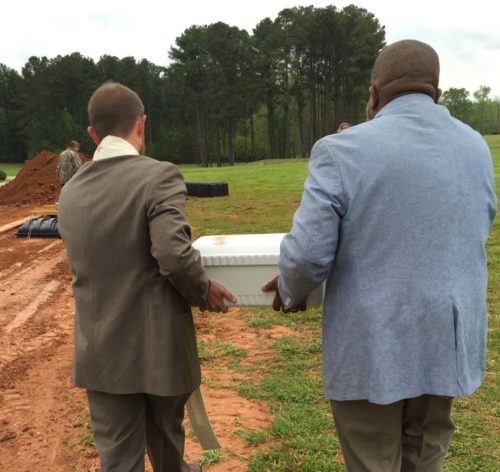 The Rev. Joshua Case (left) and the Rev. Cliff Dawkins carry the body of a child to a burial site after a service in April at Lakeside Memorial Gardens Cemetery. Photo: Joshua Case

[Episcopal News Service] When the Rev. Joshua Case and a small group of parishioners from Holy Innocents’ Episcopal Church bow their heads in prayer as they bury some of Atlanta’s youngest victims of violence, they often do so alone.

In some instances, family members are present at the burial. Other times, they’re not. Either they are absent, don’t have transportation to the cemetery, are incarcerated, or the state forbids them to attend.

But the child is not forgotten. For this brief, solemn service, Case and the others become the child’s “family in mourning.”

Since April, Case has conducted 16 of these services at Lakeside Memorial Gardens Cemetery. These represent a small portion of the roughly 300 burials each year paid for by Fulton County’s indigent burials program. The total number of child deaths in Georgia – several hundred each year, by official count – is even more startling, and the plight of those victims has inspired Holy Innocents’ to focus its outreach efforts on child victims of violence as it seeks to live into its longtime mission and its name.

As he continued to learn more about Georgia’s young victims, Case met the Rev. Cliff Dawkins, the chaplain who oversees Fulton County’s indigent burials. Case was stunned to learn that burials of children often were taking place with no family present and no witnesses other than Dawkins and cemetery staff.

“My first response was, ‘Not in my county,’” Case said.

Dawkins invited Case to begin presiding over the children’s burials, and a small group from Holy Innocents’ has formed to accompany Case to those services.

Sullivan said Christians often mistake the call to mission as a call to do something. Sometimes it is enough simply to be present with others, letting God show them something they haven’t seen before.

The act of merely being present resonates for Mary Marvin Walter, 69, one of the parishioners who has joined Case at some of those grave sites. She said she volunteered because she was unhappy with her instinct to judge those who may have caused such tragedies.

“I wanted to get beyond that, just be a witness without any questions,” she said.

Now when that tiny coffin is blessed and lowered carefully into the ground, she resists the urge always to ask why.

The reasons aren’t always knowable. Sometimes Case learns a little about the victims from funeral directors or news headlines, but other times there are no personal details available.

Holy Innocents, founded in 1872, already was known nationally for its school, the largest Episcopal school in the country with 1,400 students. In light of the school’s success, the parish began about a decade ago discussing what should come next.

“Really, we hadn’t looked deeper at the call of what it means to be people of the holy innocents,” said the Rev. Michael Sullivan, who became rector in 2009. “Our name is calling us into the world in ways that are essential for the kingdom to be present among us.” The name refers to the biblical account of infanticide by Herod the Great, who ordered the execution of all young male children in the vicinity of Bethlehem to avoid the loss of his throne to a newborn King of the Jews.

An early step the Georgia church took toward answering the call of its name was the introduction of an annual requiem Mass and prayer vigil, where the congregation reads the names of all the children in Georgia who died from violence in the past year. It started in 2010.

“The first year, we thought we would just have a few names,” Sullivan said. “We were shocked when the departmental agency gave us a list of several hundred names.”

In recent years, the total provided by state agencies has topped 500. The next vigil will be Nov. 6.

By Georgia law, child fatalities are included in the total if they are “sudden, unexpected, unexplained, suspicious or attributed to unusual circumstances,” and that could range from homicide to a co-sleeping death.

Child fatalities are not just a Georgia problem. Nationally about 1,580 children died from abuse or neglect in 2014, according to the Centers for Disease Control and Prevention. Most of those victims were less than a year old. Separately, the agency’s most recent fact sheet on youth violence says there were 4,800 homicide victims ages 10 to 24 in 2010.

“Violence is a very broad category,” said Ashley Willcott, director of the Georgia Office of the Child Advocate, which provides oversight of the state’s Division of Family and Children Services. A violent death might happen at the hands of a foster parent, or it could be a suicide or an accidental shooting. “The bottom line is we need to know: Could it have been prevented?” 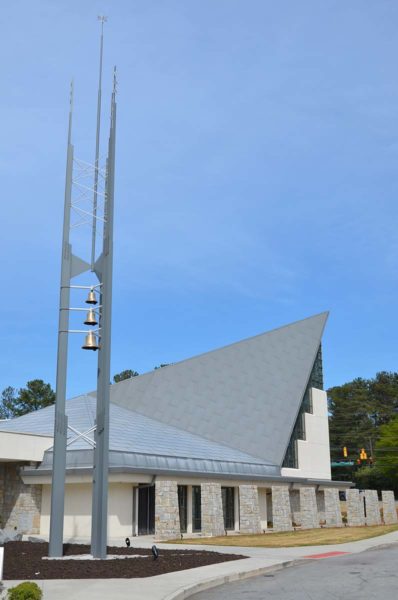 Willcott praised churches like Holy Innocents’ that are bringing awareness to the plight of vulnerable children and getting the community and their congregations involved.

“Holy Innocents’, to me, is one of the churches … really leading the way in combining the knowledge of ‘this is what’s happening to children’ to ‘what are the next steps?’”

Case was hired by the church in 2011 to pursue those next steps in responding to child violence. He previously spent six years working with students at international schools in Switzerland before moving to the Atlanta area to pursue his master’s degree in divinity at Emory University. His primary role at Holy Innocents’ is to lead the team developing outreach efforts addressing violence toward children.

One of Case’s newest initiatives is called “Caring for the Carers,” a program focused on supporting Family and Children Services caseworkers. The assistance may involve providing emergency clothing for the children taken from homes by the caseworkers. Or it may mean simply sitting with the caseworkers and listening as they process the trauma of their jobs.

A new 64-foot bell tower and columbarium completed this year are physical examples of the church’s new ministries. The church had long worked toward a capital project that included renovations and a tower. As the project evolved, it grew to incorporate the church’s 19th-century bell and two additional bells that were donated, creating a landmark that honors Georgia’s young victims of violence.

When the columbarium was added to the project, the church also took on the responsibility of maintaining 200 burial spaces that will be offered without charge for children who die from abuse, neglect, gun violence, abandonment, or have died in state custody.

The columbarium was consecrated in May, though no burials have yet occurred there. The tower was dedicated Sept. 18. Its bells ring every day at noon and 6 p.m.

Case sees his mission and the mission of the church as making Georgia a holier place for all God’s children. The children who attend the church’s school already may see Georgia as a holy place, but “there’s a significant population of children … for whom Georgia is not a holy place at all,” he said.

The ministry has had a personal effect on Case, 39, who has two young children of his own.

“I can tell you it’s reshaped me as a father,” he said. “I probably operate with a little more grace with my toddler than I did before.”