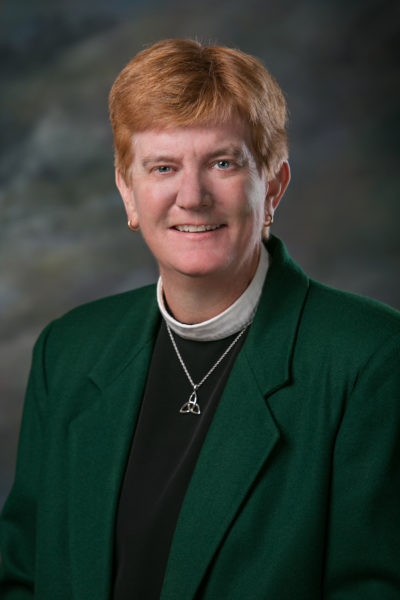 The election was held on Oct. 15 during the 52nd Annual Convention in Lewiston, Idaho.

Rehberg was chosen from among four final nominees to lead the Episcopal Church in Eastern Washington and North Idaho, representing 40 worshiping communities.

Rehberg said, “I am incredibly humbled and honored to be elected bishop of our diocese. Only one person is elected bishop, but the work is all of ours. I am thankful for the leadership of Bishop Waggoner and the love that he has for all of us. I look forward to building on what we have to move forward into the future. I am convinced that with the diocese working together in partnership with God and one another we can take the next faithful step forward in following Jesus, in loving God and loving our neighbor and in being creative and compelling witnesses to Jesus Christ here in the Diocese of Spokane. Thank you for your trust in me. I am humbled by it, and look forward to working with all of you in the days and years to come.”

Rehberg will be starting the work of of bishop-elect in February, and pending the required consents from a majority of bishops with jurisdiction and standing committees of the Episcopal Church, will be ordained and consecrated as bishop in March 2017 in the Cathedral of St. John the Evangelist in Spokane. She will succeed the Rt. Rev. James (Jim) Waggoner, Jr. who was consecrated the eighth bishop of the diocese in 2000.

Rehberg is passionate about proclaiming the inclusive love of God and equipping the people of God for transformation and growth. Christian formation for all ages is of vital importance to Gretchen, and she stresses the need for both rigorous engagement and the need for openness and humility in learning. Rehberg has served as the rector of the Episcopal Church of the Nativity, Lewiston, since 2006. She is the chair of the Commission on Ministry, a Canon for Regional Mission, and a trainer for the College for Congregational Development in the Episcopal Diocese of Spokane. In these ministries she has combined her passion for equipping people for ministry and assisting congregations in becoming more faithful, healthy, and effective communities of faith. She has a M.Div. from General Seminary, a D. Min. from Wesley Seminary, and Ph.D. in Chemistry. Previously she was a professor of organic chemistry, and served her community as an EMT/firefighter.

The Episcopal Diocese of Spokane is composed of 40 worshiping Christian communities in Eastern Washington and North Idaho.