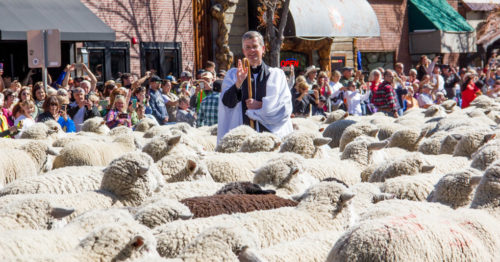 [Episcopal News Service] On a normal Sunday, the Rev. Ken Brannon, rector of St. Thomas Episcopal Church in Sun Valley, Idaho, ends his services by blessing his congregation. After services on Oct. 9, though, he stood with a shepherd’s crook in the middle of neighboring downtown Ketchum, blessing a thousand baaing sheep as they swarmed past him.

The event was the annual sheep parade when hundreds of the four-legged woollies are herded out of the Sawtooth Mountains and driven along Ketchum’s main thoroughfare past throngs of cheering spectators.

At the head of this woolly menagerie was Brannon, clad in a black cassock, billowing white surplice and black tippet, and drawing as much applause and shout-outs from the crowds as the stars of the parade, the sheep.

The parade, complete with sheep, historic sheep wagons, dancers and musicians, is part of the Trailing of the Sheep Festival, held annually since 1997. The event honors the history of the area’s sheep ranching heritage that dates to the 1860s.

The sheep graze on the rich grasses in the high mountain meadows during the summer months. In the fall, they are brought down and taken to warmer climates to spend the winter. 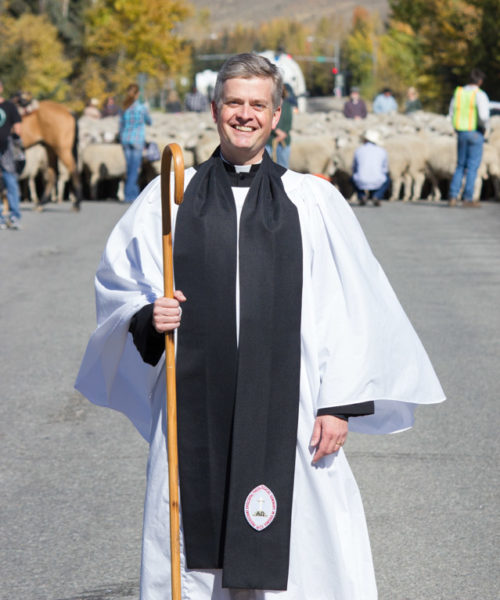 But the highlight is Sunday when a large herd of sheep is brought out of the mountains and marched through Ketchum. And it is Brannon’s job to bless them.

“I walk and pray that they don’t run over me,” he said. “The first time I did this, I thought that if you get thousands of sheep running at you, it could end badly.”

Actually, he said, the sheep flow around him like a slow moving river. “It adds a particular flavor to the parade,” he said.

This past Sunday, another particular flavor was added – two small children dressed as sheep wandered onto the parade route. Brannon blessed them as their father scooped them up and headed for the sidewalk.

Or, as Brannon likes to point out, “They are Episcopal sheep.”

“I love doing this,” he said. “It’s pretty unique. There are throngs lining the road. The shepherd’s crook harkens to that good shepherd image. It’s a sweet thing.”

Although he can’t associate anyone joining his congregation from his role in the festival, he is often asked for his blessing, a task which once included blessing a cowboy and his horse.

In 2016, Brannon was joined in the parade by the Rt. Rev. Brian J. Thom, bishop of the Diocese of Idaho, who was visiting St. Thomas that Sunday.

Although the parade is scheduled to begin at noon, it actually depends on the schedule of the sheep, and sheep being sheep, they don’t adhere to strict timetables. As the sheep dawdled along the route one year, Brannon was left stranded in the middle of Main Street — the subject of good-natured fun-poking by the announcer and to the delight of the spectators.

What does he say when he blesses the sheep?

“My predecessor said, ‘Go and be the best sheep you can be.’ That’s stuck with what the media reports and what people think the prayer is.”

He acknowledges there is a bit of tension involved in his role. “I’m there blessing them, and I do enjoy a good lamb meal,” he said. “But that’s how the world works. I’m grateful for what sheep offer to our common life.”

— Mike Patterson is a member of St. Michael and All Angels Episcopal Church in Blanco, Texas. He is a sheep raiser himself and attended the 2016 Trailing of the Sheep Festival for the third year in a row.