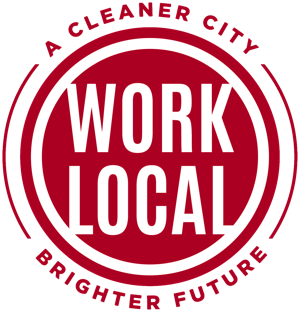 [Episcopal News Service] An Episcopal church in downtown Memphis is one of the driving forces behind a new program to address homelessness in the city by reaching out to panhandlers and offering them paid day jobs cleaning up decaying urban properties, as well as a meal and shelter for the night.

When someone stands on a street corner holding a sign that reads “Will work for food,” the community’s new response will be, “You’re hired.”

The pay is $9 an hour in cash, and “this enables people to work for 5 hours, which for some people is really a good full day,” said Christine Todd, community ministries coordinator at Calvary Episcopal Church. She proposed the idea in February after learning about a successful similar program in Albuquerque, New Mexico.

Outreach ministries are “vital to what we do and who we are,” said the Rev. Buddy Stallings, Calvary’s priest in charge. “Calvary is known in the city as being composed of a group of people who take impacting life for the least fortunate people in Memphis very seriously.”

Tending to the homeless also is a calling of the greater Episcopal Church, as emphasized in the Anglican Communion’s Third Mark of Mission: to respond to human need by loving service.

Todd’s idea for loving service has grown into a program in Memphis called Work Local that will be run by the nonprofit organization Hospitality Hub with support from downtown businesses, churches, social service agencies and city leaders. Memphis Mayor Jim Strickland committed $140,000 from the city for the project’s first year, and public works officials will be team with the Hospitality Hub to identify appropriate work sites. 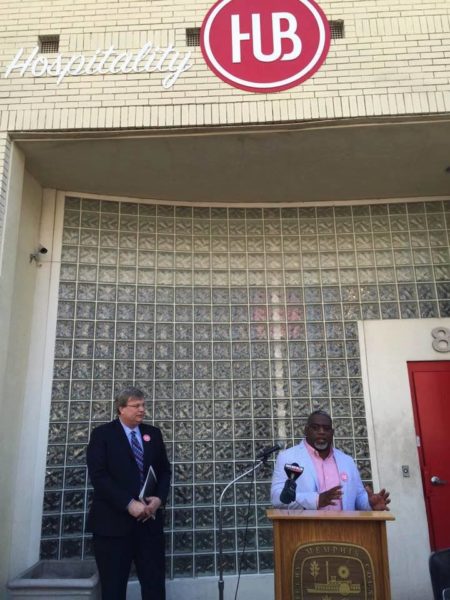 “We must do everything we can to ensure every member of our community has the opportunity to lift themselves up from their circumstances,” Strickland said in September in announcing the program.

Memphis has an estimated homeless population of around 2,500 people, said Kelcey Johnson, director of operations at Hospitality Hub. The organization was formed in 2007 by an association of four downtown churches, including Calvary. Located at a site provided by Calvary next to the church, the nonprofit helps people “exit” homelessness, “if they agree,” Johnson said.

“Some people are serious about getting out of homelessness, so they do everything required,” Johnson said, which may include mental health counseling, drug and alcohol treatment or meeting with a lawyer or veterans’ representative.

The Work Local program will offer to connect those homeless people to such services and assistance, in addition to the pay, food and shelter they will receive.

Panhandlers make up a small subset of the homeless population, Johnson said, but the issue has generated attention and debate across the country as cities have pursued various methods to curb the practice.

A report by the National Law Center on Homelessness & Poverty notes that out of 187 cities surveyed, 24 percent ban all begging in public, and 76 percent prohibit it in some areas.

“Despite a lack of affordable housing and shelter space, many cities have chosen to criminally punish people living on the street for doing what any human being must do to survive,” the report says. “The criminalization of necessary human activities is all too common in cities across the country.”

Memphis’ panhandling ordinance includes a full ban on the practice in the downtown area and panhandling is prohibited elsewhere in certain conditions, such as near a church, at a gas station pump or within three feet of a person being asked for money. The ordinance, however, doesn’t restrict a person who “passively stands or sits with a sign or other indication that one is seeking donations.”

An awareness campaign by the Downtown Memphis Commission, meanwhile, advises downtown visitors to “say no to panhandling” but “say yes to charities that help the homeless and needy.”

That is the approach Albuquerque is taking. It was forced to relax its strict anti-panhandling rules in response to a lawsuit in 2004. Current Mayor Richard Berry has made homelessness a top priority, and in September 2015, his administration launched the work program for panhandlers called “There’s a Better Way.”

“We wanted to try and create an initiative that would be a little out of the box,” Berry said in an article in Governing magazine. “Instead of taking the punitive approach and the regulatory approach, why not try something that uplifts everybody?”

Outreach has been a big part of Calvary Episcopal Church’s identity, Todd said, so she was intrigued by Albuquerque’s program when she learned about it through a PBS report.

“Memphis has so many people who are panhandling, and we’re a downtown church and we really have a lot of people who have great needs,” Todd said. 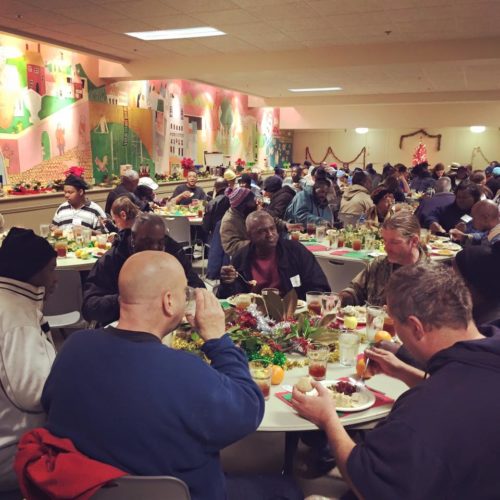 The parish already had been serving that population. Every Sunday, at 7:30 a.m., the church throws open its doors and welcomes the homeless for a free breakfast that includes a prayer led by one of the church’s ministers. By the time the parish’s first Sunday service begins at 8 a.m., most of the 200 or so breakfast patrons already have moved on, Todd said.

She contacted Albuquerque officials to learn more about their work program, and in February, she arranged for a sort of homelessness summit at Calvary, inviting city leaders, nonprofit organizations and other downtown stakeholders to discuss the possibility of trying something similar in Memphis. The response was overwhelming.

“Everybody bought into it,” she said.

Starting Nov. 1, the Hospitality Hub will send a van every Tuesday and Thursday to places in the city where panhandlers typically gather. Each work day, the van will pick up 10 men and women who are willing and able to do the work, and they will be dropped off at the city’s work sites to clear graffiti, weeds and trash from properties.

Finding the workers won’t be a problem, Johnson said. The word has gotten out, and the many of the Hospitality Hub’s regular clients have shown interest.

“We’re getting calls all day, every day,” he said. “People are standing in front of our door ready to go to work.”

Johnson said the program easily could expand to add more vans if it proves successful. A private donor has offered to help with some of that cost, and the Hospitality Hub will be launching a fundraising effort to cover costs after city funding ends.

Calvary Episcopal Church also is raising money for the cause. It plans to give proceeds from its upcoming Lobsterpalooza event to the work program for panhandlers.

“Our hope, obviously, is that this will be sort of a bridge to better circumstances for these individuals down the road,” Stallings said.

The other downtown churches are equally supportive, and Johnson sees that as a good sign for Work Local.

“A lot of things happen because church people care about it,” he said. “I think that’s another reason it’s going to be successful, because it’s not just the city’s job, it’s for all of us to do.”