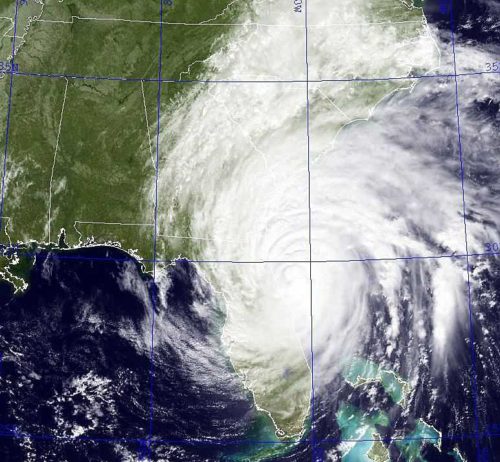 [Episcopal News Service] Hurricane Matthew was continuing its deadly trek northward Oct. 7, hitting eastern Florida with a glancing but destructive blow and heading for the coasts of Georgia and the Carolinas.

Some Episcopalians are under mandatory evacuation orders and other Episcopalians are opening their homes to them and their pets. Sunday worship and other events in congregations in the affected parts of the Eastern Seaboard have already been canceled or postponed under the threat of high winds, torrential rain and what the U.S. National Hurricane Center called “a danger of life-threatening inundation” from storm surge plus high waves.

Episcopal Relief & Development said Oct. 7 that it is “providing technical assistance to dioceses and partners in the affected areas as they assess damage, and continues to reach out to those in the storm’s path.” The organization is working through Episcopal networks in Haiti, Cuba and the Dominican Republic to provide food, water and shelter supplies.

In the United States “dioceses are doing the work they can do at this point – closing offices, rescheduling worship and other activities, setting up communications systems and evacuating as appropriate,” said Katie Mears, director of Episcopal Relief & Development’s U.S. Disaster Program. “There is also cross-diocesan support being offered, which is very heartening.”

Matthew has weakened to a category 3 storm, but the blunt force of its maximum 115 mph winds spinning just offshore continue to damage the southeastern Atlantic coast of the United States. Cape Canaveral recorded a 107 mph wind gust during the early morning. At 2 p.m. EDT Oct. 7 the hurricane was 60 miles southeast of Jacksonville, Florida.

More than 800,000 people were without power in Florida but the Associated Press reported at midafternoon that the storm had thus far avoided some of the state’s most heavily populated stretches of the coast. Matthew’s path has not been a straight one, wobbling east and west, and officials warn that the hurricane could still turn west and come over land. 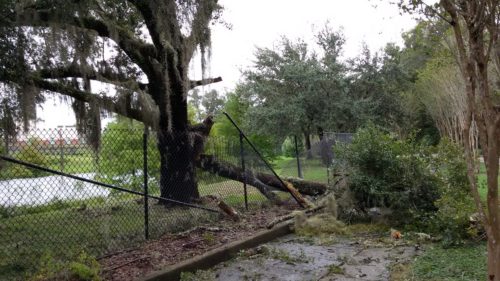 In Winter Park, Florida, just north of Orlando, a parishioner stayed overnight at St. Richard’s Episcopal Church Oct. 6-7 to keep an eye out for flooding because the building has many doors that open to an outside hallway. Many parts of the building were sandbagged in preparation for Matthew’s arrival.

The Rev. Allison Harrity, rector of St. Richard’s, told Episcopal News Service via email the morning of Oct. 7 that she was unable to get to the church but the area still had power at that point. Later in the day, she reported that the church was not damaged. Harrity said she plans to hold Sunday worship at the church, complete with the scheduled blessing of the animals.

Farther north, as residents of Jacksonville, Florida, awaited Matthew’s arrival, St. John’s Episcopal Cathedral has been closed since Oct. 6 because it is in a mandatory evacuation zone. Nearly half a million residents were ordered to leave their homes in advance of the storm, the AP reported. The cathedral is just blocks from the St. Johns River, which forecasters say could experience storm surge.

Helen Likins, communications coordinator, warned people not to come to the cathedral seeking shelter and, in a statement on the church’s website, urged area residents with no other place to go to head to the nearby Salvation Army-run shelter “before all the bridges to downtown close.” As of midday Oct. 7, the cathedral planned to conduct worship in the church on Sunday, Oct. 9. 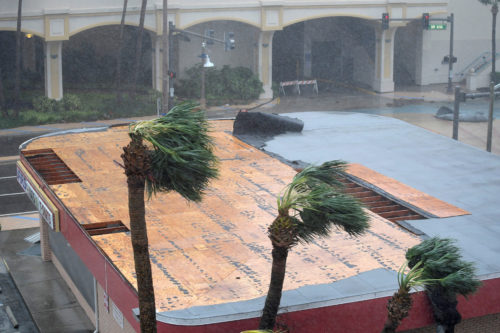 Part of the roof of a business peels away as the eye of Hurricane Matthew passes Daytona Beach, Florida, Oct. 7. Photo: REUTERS/Phelan Ebenhack

“The wind and rain are really intensifying now,” Theresa Johnson, an Episcopalian who lives in Jacksonville and is the communications director for Fresh Ministries, told Episcopal News Service mid-morning on Oct. 7. Johnson said she and her husband, Dave Knadler, are not in an evacuation zone and “so we’re riding it out, waiting for the power to go out.”

North of Florida, residents along the Georgia coast are also bracing for Matthew, which forecasters predict will pass overnight Oct. 7 and 8. Twenty-four Diocese of Georgia congregations are in that state’s mandatory evacuation zones, the Rev. Frank Logue, canon to the ordinary, told ENS in a telephone interview.

As Episcopalians in those low-lying areas sought shelter inland, their brothers and sisters farther west responded. “Episcopalians in Tifton and Albany have space for those needing shelter, including options for pets and livestock,” the Rev. Deacon Leeann Drabenstott Culbreath wrote on the diocesan Facebook page.

The offer of spare bedrooms and beds was welcomed, Logue said, because most hotels were full. Clergy in the evacuation areas have all left but not before ensuring that all of their parishioners had the means to evacuate and places to go, he said.

“The evacuation went really well and having Episcopalians open their homes made it easier for all of us,” Logue said.

St. Anne’s Episcopal Church in Tifton, Georgia, is sheltering 40 health-care workers who evacuated with their elderly patients from a nursing home in a low-lying coastal area, according to Logue. The patients were being housed in an area care facility and the nursing home employees are staying at the church.

Logue had weekend meetings at inland congregations and thus already had hotel reservations, he said. His wife left Savannah to stay with her mother elsewhere.

Up in Charleston, South Carolina, the offices of the Episcopal Church in South Carolina have been closed since noon on Oct. 5 and many congregations have had to cancel or postpone events due to the impending hurricane. Three Episcopal churches farther inland have offered shelter for evacuees.

New Bishop Provisional Skip Adams visited with officials and emergency personnel Oct. 6 who are preparing for the hurricane. Adams asked Episcopalians to keep them in their prayers along with all who are in the path of the storm.

Matthew’s earlier trail of devastation in the Caribbean is also becoming clearer as aid workers reach areas isolated and damaged by the hurricane in the Bahamas, Cuba, the Dominican Republic and Haiti.

Before hitting Haiti, the storm was blamed for four deaths in the Dominican Republic, one in Colombia and one in St. Vincent and the Grenadines. 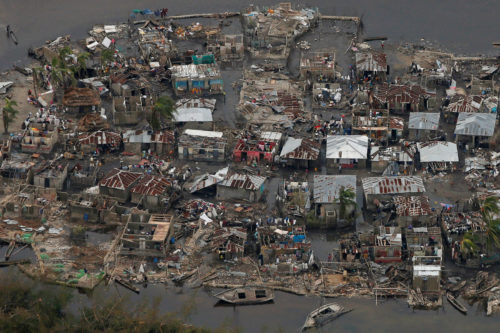 The Haitian government’s official death toll stands at nearly 300, according to the Associated Press but authorities doing the on-ground assessment in remote corners of the southwestern peninsula where Matthew made landfall said the toll would likely be significantly higher when a full accounting was complete. Haiti’s government has estimated at least 350,000 people need some kind of assistance in what is likely to be the country’s worst humanitarian crisis since the devastating earthquake of January 2010, the AP said.

The Rev. Deacon Clelia P. Garrity told ENS via email Oct. 7 that the community of Bondeau in the Nippes region of Haiti was devastated by Hurricane Matthew. Episcopalians in the area partners with several groups in the United States, including the South Florida Haiti Project; Grey Dove Inc., of which Garrity is the chair and chief executive officer; and Water for Small Villages.

The area’s school, medical clinic, church, guesthouse and surrounding houses all sustained severe damage, she said. While no deaths were reported, most residents are left homeless; the water supply has been compromised, and the area is cut off from the rest of Haiti as a result of the collapse of a bridge in Petit Trou, she said.

The Colorado Haiti Project reported via Facebook Oct. 7 that it had received some information about its partners in Petit Trou de Nippes. Father Abiade, the priest who leads St. Paul’s Parish and School there, survived the storm and “is ready to start forging the long path to recovery for his people.”

No lives were lost but “the hurricane took their clothes, books, phones, crops, livestock… everything.”