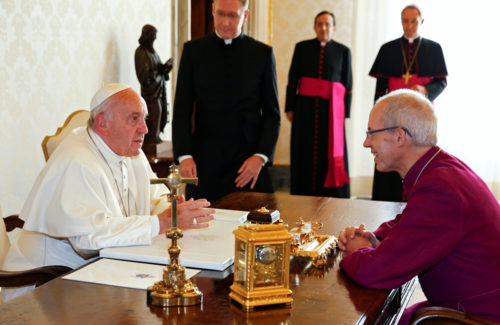 [Episcopal News Service — Rome] Presiding Bishop Michael Curry and more than half of the Anglican Communion primates have travelled to Rome this week to celebrate a historic and significant milestone – 50 years since Pope Paul VI met with Archbishop of Canterbury Michael Ramsey in Rome in 1966. It was the first time an archbishop of Canterbury had met with the Roman Pontiff since the Reformation and Pope Paul presented Ramsey with his episcopal ring as a sign of their friendship and the deepening partnerships between their two churches. 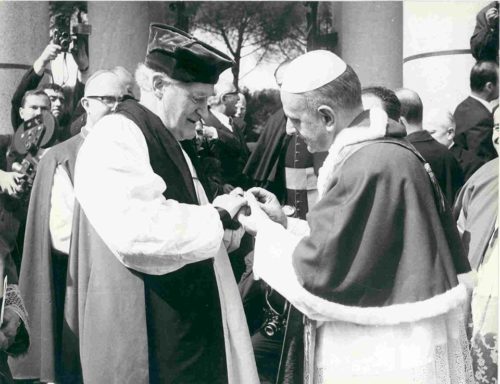 This week’s events have included an ecumenical vespers service at San Gregorio Magna al Celio in Rome, a site of major significance to the origins of the Church of England, and a private meeting between Pope Francis and the Anglican primates on Oct. 6 at the Apostolic Palace, the pope’s official residence at the Vatican City.

The 1966 meeting “was historic because it brought together two churches and two ways of faith in ecumenical unity in a time when we had in many respects been separated from one another,” said Curry, speaking to Episcopal News Service Oct. 5 outside the Gregorian University in Rome where he was attending a colloquium on current relations between the two churches.

“We’re here now in celebration of that 50th anniversary, but maybe more importantly to carry on the legacy … that has to do with carrying on the Jesus Movement … together as Roman Catholics and as Anglicans,” he added. “We’re here not simply to celebrate; we’re here to rededicate ourselves and our churches and our communities to the work of Jesus, to following in his footsteps, to make sure that children do not go to bed hungry, to proclaim the good news of Jesus to all creation, to help to make followers of Jesus Christ, and to be a leaven in the world that leavens the whole lump, so that this world looks something less like our nightmare and something more like God’s dream.”

The Oct. 5 vespers service brought together Archbishop of Canterbury Justin Welby and Pope Francis, the combined choirs of Canterbury Cathedral and the Sistine Chapel, Anglican archbishops and bishops, Episcopal bishops (including Curry) and Roman Catholic cardinals, and many other church leaders and ecumenical representatives. The archbishop and the pope each preached a sermon (videos available here), exchanged gifts as an expression of their commitment towards common mission and issued a common declaration saying that they are “undeterred” by the “serious obstacles” to full unity between Anglicans and Roman Catholics.

Fifty years earlier, Ramsey and Pope Paul issued their own Common Declaration saying that their meeting “marks a new stage in the development of fraternal relations, based upon Christian charity, and of sincere efforts to remove the causes of conflict and to re-establish unity.” 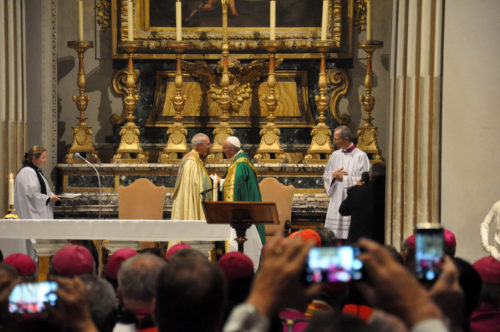 Pope Francis and Archbishop of Canterbury Justin Welby towards the end of the vespers service on Oct. 6. Photo: Matthew Davies/Episcopal News Service

Vespers on Oct. 5 marked the fourth time in recent history that a pope and an archbishop of Canterbury have worshiped together at San Gregorio. Pope John Paul II prayed at the church with Archbishop Robert Runcie in 1989 and again with Archbishop George Carey in 1996; Pope Benedict and Archbishop Rowan Williams prayed together in 2012.

The church is built on the site from which St. Gregory the Great, in the 6th century, sent St. Augustine, first archbishop of Canterbury, along with 30 monks to re-evangelize England. They landed in 597 and are credited with laying the foundations for the renewal of English Christianity. 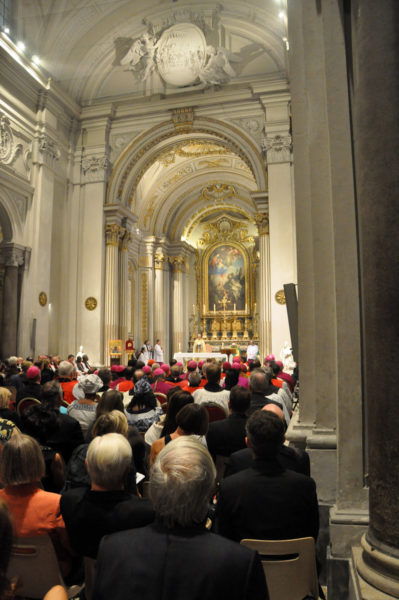 At the end of the service, and perhaps turning a new chapter in the relationships between the two churches, the archbishop of Canterbury and the pope commissioned a new phase of IARCCUM – the International Anglican Roman Catholic Commission for Unity and Mission. They blessed and sent forth 19 pairs of Anglican and Roman Catholic bishops to work together in joint mission.

Episcopal Diocese of Tennessee Bishop John Bauerschmidt and Roman Catholic Auxiliary Bishop of Baltimore Dennis Madden are among the pairings.

Bauerschmidt described the initiative as “a significant ecumenical development. It indicates that the Roman Catholic Church and the churches of the Anglican Communion are resolved to move forward toward unity and mission together despite difficulties.”

The paired bishops, he told ENS, “are meant to encourage our churches to realize the life we already share through our common baptism into Jesus Christ, and to practice that life on the local level.”

Bauerschmidt serves as co-chair of the Anglican-Roman Catholic dialogue in the U.S. (ARCUSA), which has been meeting regularly since the 1960s, making it the Episcopal Church’s oldest dialogue relationship.

The Rev. Margaret Rose, the Episcopal Church’s deputy for ecumenical and interreligious relations who is in Rome for the celebrations, told ENS that the work of ARCUSA, “as with other dialogues … emphasizes the desire to share work in mission and shalom that helps to put both life and work, faith and order in perspective.”

But while there is much to be celebrated this week, the relationship between the Anglican Communion and the Roman Catholic Church has been somewhat turbulent since the Reformation of the 16th century, and strained in recent years due to differences concerning women’s ordination and human sexuality. The Vatican’s efforts to offer a spiritual home to former and disaffected Anglicans while enabling them to retain aspects of their liturgy and traditions through what is called a “Personal Ordinariate” has also strained the relationship.

Although there are many women serving as bishops in provinces throughout the Anglican Communion – in Australia, Canada, England, New Zealand, Southern Africa and the U.S. – the 19 pairs of bishops commissioned during the vespers service included only men.

Diocese of Indianapolis Bishop Catherine Waynick, who participated in the commemorations in Rome, told ENS she believes that “ecumenism is essential to the life of the church, if we are to be faithful. None of us has all the truth, and if we hold ourselves apart from each other we put ourselves in a spiritually dangerous place.”

“I am well aware that the decision of provinces in the Anglican Communion to include women in the episcopate has met with rejection by other churches,” Waynick said. “But having entered my twentieth year as bishop of Indianapolis, and having known other women serving in this ministry, I can only say that for other churches to hold themselves apart from the truth and value of our faithful ministry is a mistake.”

Waynick, who is a governor of the Anglican Centre in Rome, said that “wearing a collar and purple shirt in Rome draws comment from all sorts and conditions of people — who invariably express the sentiment that it would be a good and faithful thing if the next time bishops are sent out two by two, women are among them!”

In any case, Waynick said, “ecumenical dialogue must continue for us to remain faithful to the mind and heart of Jesus — ‘that they all may be one.'”

Rose agreed, saying that “in these troubled times, it is heartening to see our churches moving toward unity.”

“The visible sign of bishops working together and the exchange of gifts in the vespers service are one aspect of this. The commitment to addressing openly the challenges of our difference is yet another sign of hope. In future gatherings, the inclusion of ordained women among the working partners would offer an opportunity to live into this commitment at an even deeper level.”

The week’s celebrations also recognize the 50th anniversary of the Anglican Centre in Rome, established in response to that 1966 meeting as an official presence with an ambassadorial role on behalf of the Anglican Communion in the Eternal City.

The Anglican Centre houses an extensive library, serves as an ecumenical meeting place and educational center, and includes the offices of the archbishop of Canterbury’s diplomatic representative to the Vatican, Archbishop David Moxon.

“We’ve been here as a place where we can extend the hand of friendship and fellowship to our Roman Catholic sisters and brothers in Rome, and to look the Vatican in the eye, to speak the truth in love and to repair a bridge that has now got a lot of traffic going across it,” Moxon said Oct. 4 addressing a gathering of the American Friends of the Anglican Centre in Rome. He reminded the gathering of the words that Pope Paul VI had spoken to Archbishop Ramsey at the 1966 meeting: “You are repairing a bridge that had long fallen in ruin centuries ago.”

Curry told the American Friends that the “mission of the church is to help the human family, with all its variety and all its diversity and all its differences, to find a way to become not simply a disparate community but a human family of God. Dr. Martin Luther King said it this way, ‘we shall either learn to live together as brothers and sisters, or we’ll perish together as fools.’ The choice is ours, chaos or community.”

The Episcopal Church has a presence in Rome through St. Paul’s Within the Walls Episcopal Church, which hosts a significant ministry serving the city’s refugees through the Joel Nafuma Refugee Centre. The parish is part of the Convocation of Episcopal Churches in Europe.

Curry will visit the refugee center on Oct. 7 and preach at St. Paul’s during Sunday Eucharist on Oct. 9.

— Matthew Davies is editor/reporter of the Episcopal News Service.

Editor’s note: This story was recast at 2:15 EDT Oct. 6 to include comments from Diocese of Indianapolis Bishop Catherine Waynick.