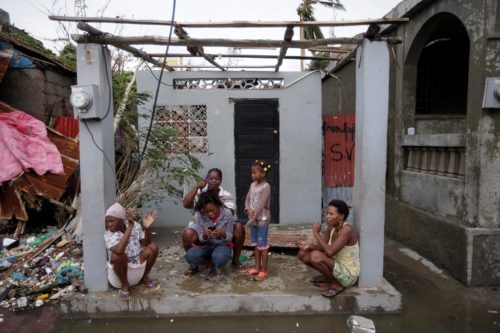 Women sit at the entrance of a house damaged by Hurricane Matthew in Les Cayes, Haiti. Photo: REUTERS/Andres Martinez Casares

[Episcopal News Service] Hurricane Matthew continued to churn north through the Caribbean on Oct. 5, slamming the Bahamas after battering Haiti, the Dominican Republic and Cuba the day before with torrential rain and 140-mile per-hour winds.

At least 11 people have died in the storm, according to the Associated Press. The death toll is likely to increase. Homes, livestock and farm fields have also been lost.

The hurricane caused the collapse of a major bridge, cutting off the only road linking the capital of Port-au-Prince to the southern Haiti peninsula where Matthew first made landfall. The Washington Post reported that aid teams are struggling to reach the area.

Episcopal Relief & Development said it has been in contact with several of its partners in the path of the storm. “Following the storm’s impact, local churches are likely to aid in assessing damage, confirming the safety of members and others in their communities and using available facilities and resources to respond to immediate needs,” the organization said.

Sikhumbuzo Vundla, the Episcopal Diocese of Haiti’s chief of operations, said Oct. 4 after the brunt of the storm had passed that damage assessment would begin in earnest Oct. 5. Initial reports indicate that all the clergy of the diocese and their families survived. Bishop Jean-Zaché Duracin and his family were safe and sheltering at home, he said.

The southern coastal town of Les Cayes is reported to be devastated. A resident told CBS News that “it’s like a bulldozer just passed by.” The diocese’s Bishop Tharp Institute of Business and Technology is located in Les Cayes.

The diocese’s Faculte des Sciences Infirmieres de Léogâne nursing school in Léogâne (about 18.5 miles outside of Port-au-Prince) did not sustain damage from Matthew, according to postings on its Facebook page. Students, faculty, and staff stayed on campus as the storm passed and no one was injured.

“Many people in Léogâne lost the roof of their house and the streets are flooded,” one post said near mid-day EDT on Oct. 5. “It is still raining there, but the winds have subsided some.”

Evens Joicin, the school’s clinical supervisor, had to evacuate to a friend’s home Oct. 4, along with his wife and children, because their home collapsed.

Two Episcopal Church Young Adult Service Corps members, Elijah Lewis from the Diocese of Upper South Carolina and Mitch Honan from the Diocese of Connecticut, are safe. Both are stationed the St. Barnabas Agricultural Center in Cap Haitien in the northern part of Haiti. Matthew went past the area but caused far less damage. 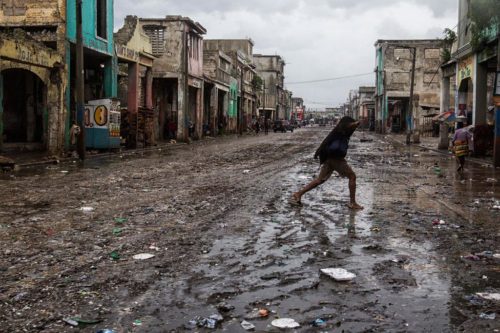 Many streets in the Haitian capital of Port-au-Prince flooded as the hurricane passed by. Photo: MINUSTAH via Facebook

Many Episcopal Church dioceses, congregations and members have formal partnerships and informal relationships with Episcopal churches and institutions in Haiti, and they have been trying, sometimes in vain, to contact their partners.

“Sadly, we still have no word from our partners who are in Petit Trou de Nippes,” Colorado Haiti Project Executive Director Jackie Martin said Oct. 5 on the group’s Facebook page. “We cannot imagine all that has been lost in this place we love, we continue to pray for the protection and security of our friends and partners.”

The local NBC television affiliate broadcast a story Oct. 4 about Matthew’s landfall near Petit Trou de Nippes and the group’s work there.

Representatives of another long-term outreach ministry, this one between the Diocese of Milwaukee’s Haiti Project and partners in Jeannette, Haiti, an agricultural village on the southern peninsula, are also keeping track of their partners. A Facebook post late Oct. 4 reported that the Rev. Jean Lenord Quatorze, priest-in-charge at St. Marc’s Episcopal Church, he had not yet been able to make a full assessment of damage.

“The first need is getting food from the market because gardens have been wiped out and 50 people are currently staying at the school because their homes were destroyed,” the post said.

In Port-au-Prince, the Rev. Frantz “Fanfan” Cole, director of the diocese’s St. Vincent Center for Handicapped Children, said Oct. 5 that the school, which will be closed until Oct. 10, and the clinic and brace shop suffered minor damage. The center’s 30 permanent residents were all safe and uninjured, he said.

The fate of the more than 250 students who regularly come to the center is unknown. “The center’s staff and faculty members are reporting missing family members and there is widespread nervousness about the possibility of another storm, even if it only proves to be a rain event,” he said. “Authorities are advising people to expect an increase in cholera and other water-borne illnesses.”

Hurricane Matthew made landfall as an “extremely dangerous” Category 4 storm near the Haitian town of Les Anglais on the country’s southern Tiburon Peninsula about 7 a.m. EDT Oct. 4, the U.S. National Hurricane Center said. The storm then churned across the peninsula and the eye of the storm had moved out over the open water of the Gulf of Gonave, west of Port-au-Prince, four hours later. Later in the day, the eye moved over the Windward Passage and eastern Cuba.

Matthew dealt a crippling blow to Haiti, a country still trying to recover from the devastation wrought by the magnitude 7.0 earthquake in January 2010. The U.N. deputy special representative for Haiti, Mourad Wahba, called Matthew “the largest humanitarian event” in Haiti since the earthquake and said that “much of the population” has already been displaced.

Some strengthening is forecast during the next couple of days, and Matthew is expected to remain at Category 3 or stronger while it moves through the Bahamas and approaches the east coast of Florida by the evening of Oct. 6. Forecasters also predict Matthew will turn northeastward off Jacksonville, Florida, during the early morning of Oct. 8 and continue to track out to sea.