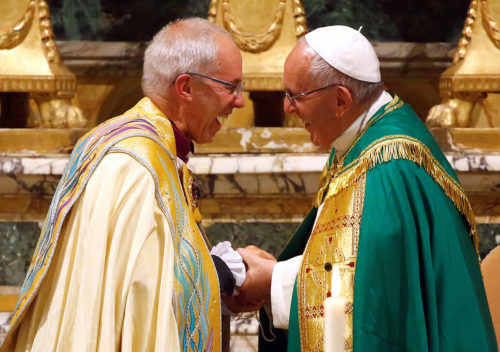 [Anglican Communion News Service] Pope Francis and Archbishop of Canterbury Justin Welby have said that they are “undeterred” by the “serious obstacles” to full unity between Anglicans and Roman Catholics.

In a Common Declaration, issued in Rome Oct. 5, the two say that the differences “cannot prevent us from recognizing one another as brothers and sisters in Christ by reason of our common baptism. Nor should they ever hold us back from discovering and rejoicing in the deep Christian faith and holiness we find within each other’s traditions.”

The Common Declaration was made at a service of Vespers in the Church of Saint Gregory on the Caelian Hill in Rome, from where, in 595AD, Pope Gregory sent Augustine to evangelise the Anglo-Saxon people. Augustine became the first archbishop of Canterbury in 597.

During the service, 19 pairs of Anglican and Roman Catholic bishops from across the world were commissioned by the pope and the archbishop before being “sent out” in mission together. Among the 19 pairings are Episcopal Bishop of Tennessee John Bauerschmidt and Roman Catholic Auxiliary Bishop of Baltimore Dennis Madden.

Pope Francis told them: “Fourteen centuries ago Pope Gregory sent the servant of God, Augustine, first Archbishop of Canterbury, and his companions, from this holy place, to preach the joyful message of the Word of God. Today we send you, dear brothers, servants of God, with this same joyful message of his everlasting kingdom.”

And Welby said: “Our Savior commissioned his disciples saying, ‘Peace be with you’. We too, send you out with his peace, a peace only he can give. May his peace bring freedom to those who are captive and oppressed, and may his peace bind into greater unity the people he has chosen as his own.”

of HIS HOLINESS Pope Francis

and HIS GRACE Justin Welby ARCHBISHOP OF CANTERBURY

Fifty years ago our predecessors, Pope Paul VI and Archbishop Michael Ramsey met in this city hallowed by the ministry and blood of the Apostles Peter and Paul. Subsequently, Pope John Paul II with Archbishop Robert Runcie, and later with Archbishop George Carey, and Pope Benedict XVI with Archbishop Rowan Williams, prayed together here in this Church of Saint Gregory on the Caelian Hill from where Pope Gregory sent Augustine to evangelise the Anglo-Saxon people. On pilgrimage to the tombs of these apostles and holy forebears, Catholics and Anglicans recognize that we are heirs of the treasure of the Gospel of Jesus Christ and the call to share that treasure with the whole world. We have received the Good News of Jesus Christ through the holy lives of men and women who preached the Gospel in word and deed and we have been commissioned, and empowered by the Holy Spirit, to be Christ’s witnesses “to the ends of the earth” (Acts 1: 8). We are united in the conviction that “the ends of the earth” today, is not only a geographical term, but a summons to take the saving message of the Gospel particularly to those on the margins and the peripheries of our societies.

In their historic meeting in 1966, Pope Paul VI and Archbishop Ramsey established the Anglican-Roman Catholic International Commission to pursue a serious theological dialogue which, “founded on the Gospels and on the ancient common traditions, may lead to that unity in truth, for which Christ prayed”. Fifty years later we give thanks for the achievements of the Anglican-Roman Catholic International Commission, which has examined historically divisive doctrines from a fresh perspective of mutual respect and charity. Today we give thanks in particular for the documents of ARCIC II which will be appraised by us, and we await the findings of ARCIC III as it navigates new contexts and new challenges to our unity.

Fifty years ago our predecessors recognized the “serious obstacles” that stood in the way of a restoration of complete faith and sacramental life between us. Nevertheless, they set out undeterred, not knowing what steps could be taken along the way, but in fidelity to the Lord’s prayer that his disciples be one. Much progress has been made concerning many areas that have kept us apart. Yet new circumstances have presented new disagreements among us, particularly regarding the ordination of women and more recent questions regarding human sexuality. Behind these differences lies a perennial question about how authority is exercised in the Christian community. These are today some of the concerns that constitute serious obstacles to our full unity. While, like our predecessors, we ourselves do not yet see solutions to the obstacles before us, we are undeterred. In our trust and joy in the Holy Spirit we are confident that dialogue and engagement with one another will deepen our understanding and help us to discern the mind of Christ for his Church. We trust in God’s grace and providence, knowing that the Holy Spirit will open new doors and lead us into all truth (cf. John 16: 13).

These differences we have named cannot prevent us from recognizing one another as brothers and sisters in Christ by reason of our common baptism. Nor should they ever hold us back from discovering and rejoicing in the deep Christian faith and holiness we find within each other’s traditions. These differences must not lead to a lessening of our ecumenical endeavours. Christ’s prayer at the Last Supper that all might be one (cf. John 17: 20-23) is as imperative for his disciples today as it was at that moment of his impending passion, death and resurrection, and consequent birth of his Church. Nor should our differences come in the way of our common prayer: not only can we pray together, we must pray together, giving voice to our shared faith and joy in the Gospel of Christ, the ancient Creeds, and the power of God’s love, made present in the Holy Spirit, to overcome all sin and division. And so, with our predecessors, we urge our clergy and faithful not to neglect or undervalue that certain yet imperfect communion that we already share.

Wider and deeper than our differences are the faith that we share and our common joy in the Gospel. Christ prayed that his disciples may all be one, “so that the world might believe” (John 17: 21). The longing for unity that we express in this Common Declaration is closely tied to the desire we share that men and women come to believe that God sent his Son, Jesus, into the world to save the world from the evil that oppresses and diminishes the entire creation. Jesus gave his life in love, and rising from the dead overcame even death itself. Christians who have come to this faith, have encountered Jesus and the victory of his love in their own lives, and are impelled to share the joy of this Good News with others. Our ability to come together in praise and prayer to God and witness to the world rests on the confidence that we share a common faith and a substantial measure of agreement in faith.

The world must see us witnessing to this common faith in Jesus by acting together. We can, and must, work together to protect and preserve our common home: living, teaching and acting in ways that favour a speedy end to the environmental destruction that offends the Creator and degrades his creatures, and building individual and collective patterns of behaviour that foster a sustainable and integral development for the good of all. We can, and must, be united in a common cause to uphold and defend the dignity of all people. The human person is demeaned by personal and societal sin. In a culture of indifference, walls of estrangement isolate us from others, their struggles and their suffering, which also many of our brothers and sisters in Christ today endure. In a culture of waste, the lives of the most vulnerable in society are often marginalised and discarded. In a culture of hate we see unspeakable acts of violence, often justified by a distorted understanding of religious belief. Our Christian faith leads us to recognise the inestimable worth of every human life, and to honour it in acts of mercy by bringing education, healthcare, food, clean water and shelter and always seeking to resolve conflict and build peace. As disciples of Christ we hold human persons to be sacred, and as apostles of Christ we must be their advocates.

Fifty years ago Pope Paul VI and Archbishop Ramsey took as their inspiration the words of the apostle: “Forgetting those things which are behind, and reaching forth unto those things which are before, I press towards the mark for the prize of the high calling of God in Christ Jesus” (Philippians 3: 13-14). Today, “those things which are behind” –  the painful centuries of separation –have been partially healed by fifty years of friendship. We give thanks for the fifty years of the Anglican Centre in Rome dedicated to being a place of encounter and friendship. We have become partners and companions on our pilgrim journey, facing the same difficulties, and strengthening each other by learning to value the gifts which God has given to the other, and to receive them as our own in humility and gratitude.

We are impatient for progress that we might be fully united in proclaiming, in word and deed, the saving and healing gospel of Christ to all people. For this reason we take great encouragement from the meeting during these days of so many Catholic and Anglican bishops of the International Anglican-Roman Catholic Commission for Unity and Mission (IARCCUM) who, on the basis of all that they have in common, which generations of ARCIC scholars have painstakingly unveiled, are eager to go forward in collaborative mission and witness to the “ends of the earth”. Today we rejoice to commission them and send them forth in pairs as the Lord sent out the seventy-two disciples. Let their ecumenical mission to those on the margins of society be a witness to all of us, and let the message go out from this holy place, as the Good News was sent out so many centuries ago, that Catholics and Anglicans will work together to give voice to our common faith in the Lord Jesus Christ, to bring relief to the suffering, to bring peace where there is conflict, to bring dignity where it is denied and trampled upon.

In this Church of Saint Gregory the Great, we earnestly invoke the blessings of the Most Holy Trinity on the continuing work of ARCIC and IARCCUM, and on all those who pray for and contribute to the restoration of unity between us.