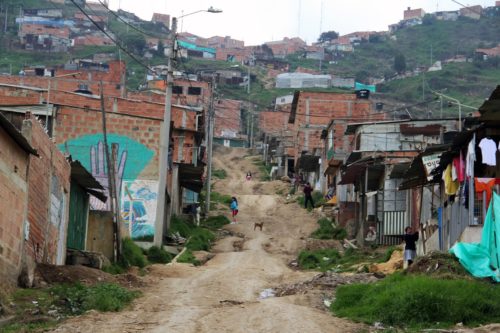 Episcopal churches throughout the Diocese of Colombia have stood with Colombians affected by the conflict. They have provided pastoral care, and humanitarian assistance and shelter to those affected by and internally displaced more than a half-century of armed conflict. Photo: Lynette Wilson/Episcopal News Service

[Episcopal News Service] Colombia Bishop Francisco Duque is calling for prayer in the aftermath of an Oct. 2 popular vote in which voters narrowly rejected a peace deal that would have ended more than 50 years of armed conflict between the government and the Revolutionary Armed Forces of Colombia, or FARC.

“We call on the church to pray a lot so that the necessary accord is reached and so that we can all live as brothers,” said Duque. “Let’s achieve a peace that brings justice, reparations and not repetition.”

Sunday’s vote defied polls that predicted overwhelming support for the peace accord. With a total of 99.8 percent of all ballots tallied, 50.2 percent of voters rejected the accord, and 49.8 percent voted “yes” for peace.

“We’re still in shock. We haven’t processed the results yet. It was a vote based on emotion, opinion. The people who showed up to vote ‘no’ didn’t want to let anyone know their opinion before so they wouldn’t be judged, but when they went to the polls they expressed themselves,” said Duque in an Oct. 3 interview with Episcopal News Service.

“Earlier polling projected that more than 60 percent of the population would vote yes, but the reality was very different, and many people didn’t even turn out to vote,” he said.

Less than 38 percent of voters went to the polls.

The “no vote” put an end to four years of peace talks. The Colombian government and the FARC, the largest guerrilla group in the country, have been negotiating in Havana, Cuba.

The referendum wasn’t legally necessary to implement the peace accord negotiated between the government and FARC. However, the president of Colombia, Juan Manuel Santos, thought that a popular vote would lend legitimacy to the accord.

On the night of Oct. 2, Santos regretfully recognized the referendum’s outcome. “Today I address the country as president of all Colombians, of both those who voted yes and those who voted no. I called for a referendum. The majority, be it by a very narrow margin, said ‘no.’ I am the first to recognize the result,” he said.

Via Twitter on Oct. 2 the FARC wrote: “To the Colombian people who dream of peace, [you can] count on us. Peace will prevail.”

In June, the government and the FARC signed a historic ceasefire, which Santos said on Oct. 4 that he would extend until Oct. 31.

The guerilla leader, Rodrigo Londoño, alias “Timochenko,” issued a statement confirming the ceasefire from Cuba following the vote’s results. “FARC-EP reiterates its willingness to use only words as weapons for building toward the future,” he wrote.

Duque indicated that the reaffirmation of the ceasefire is a hopeful sign.

“The people have had doubts about what the FARC will get [after the accord], but all of us want an end to the war. As a church we see our role will be to reconcile brothers with such polarized opinions and to pursue building peace together,” he said.

Though, he added, the church recognizes that the way forward will not be easy.

Last May, before the ceasefire, the Episcopal Diocese of Colombia agreed at a national convention to support the peace process, offering the government its facilities as “spaces for exercises in reconciliation to succeed in building a sustainable peace.”

(The Episcopal Diocese of Colombia is one of seven dioceses that make up the Episcopal Church’s ninth province, which covers Central and South America and the Caribbean.)

Colombians most affected by the war voted ‘yes.’

Since the mid-1960s government forces, left-wing guerrillas and right-wing paramilitaries have been fighting a civil war rooted in inequality that has killed more than 220,000 Colombians. Some 6.7 million people are displaced inside Colombia, about 13 percent of the 47 million inhabitants. Another 360,000 refugees have fled abroad, most to Ecuador – which hosts the largest number of refugees in Latin America, and another 170,000 have fled to Venezuela.

Churches throughout the Diocese of Colombia have stood with those affected by the conflict. They have provided pastoral care, and humanitarian assistance and shelter to Colombians affected by and internally displaced more than a half-century of armed conflict.

The church also has assisted Colombian refugees to rebuild their lives in Ecuador.

According to information gathered by the magazine Semana of Colombia, a majority of voters in areas most affected by armed conflict supported the peace accord. In mountainous regions like Chocó, Caquetá, and Nariiño where the presence of war lingers, more than 60 percent of the votes were “yes” votes for peace.

Former Colombian President Álvaro Uribe led the “no vote,”  saying it was too lenient on the rebels.

— Clara Villatoro is a freelance journalist based in El Salvador. Lynette Wilson, an editor and reporter for Episcopal News Service, contributed to this report.