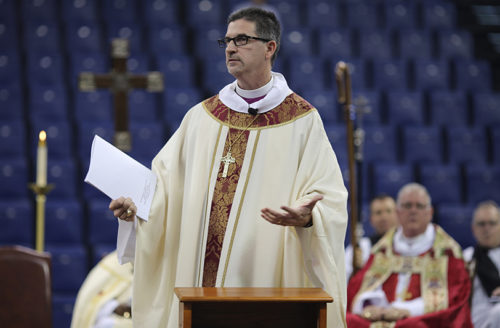 McLoughlin was elected as bishop on June 25 at Trinity Episcopal Church in Asheville after serving as canon to the ordinary in the Diocese of Oklahoma since 2008.

More than 1,000 people attended the service at Kimmel Arena on the University of North Carolina-Asheville campus. As the diocese welcomed McLoughlin and his family, it also said farewell to the Rt. Rev. G. Porter Taylor, who had served as bishop of Western North Carolina since 2004.

The Rev. John Ohmer, rector of Falls Church Episcopal in Falls Church, Virginia, preached and spoke passionately about his long friendship with McLoughlin, praising both his practical outlook and passionate faith. “José has been for me a sounding board and a source of wisdom and encouragement,” he said.

McLoughlin told the congregation that the diocese “has at its core, in its DNA, a love in the service of Jesus, a history of loving and serving neighbors, and I’m excited to join you — that’s what drew me here.”

Ordained in 2005, McLoughlin earned his Masters in Divinity from Virginia Theological Seminary and Bachelor of Arts from the University of Central Florida. Prior to his call to the priesthood, McLoughlin worked in the criminal justice field serving in the State of Florida as a police officer and in the U.S. Department of Justice in Washington, D.C. in various capacities, most recently as the special assistant/senior advisor to the assistant attorney general.

McLoughlin and his wife Laurel have been married for 23 years, and together have two children, Alexander, 17, and Alyson, 14. Born in San Juan, Puerto Rico, McLoughlin is bilingual, enjoys music, playing the drums, and studying 18th century American history.

Editor’s note: A previous version of this story said Bishop G. Porter Taylor began his service to the diocese in 2008. His term began in 2004.