[Episcopal News Service] The buzzing around Good Shepherd Mission in Fort Defiance, Arizona, isn’t just from all the projects the congregation has taken on – although there are quite a few, from the organic garden to a soap-making business.  This past summer the mission added bees to the sustainability mix.

“We’ve got a lot of stuff going on,” said Paula Elmore, the mission’s lead gardener and one of the people overseeing the fledgling beekeeping operations at Episcopal missions on the Navajo reservation. 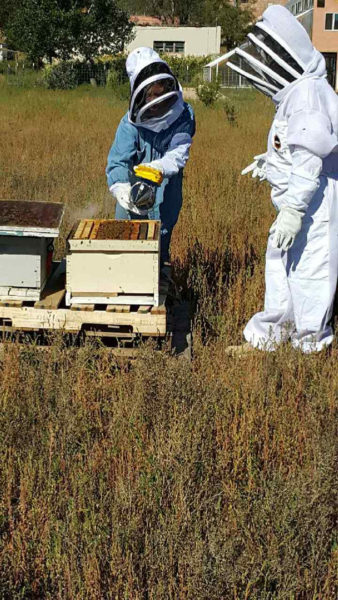 The goals of the project are many:

As a bonus, bees are fascinating creatures, Elmore said. Tending to them is mostly about giving them a home and keeping watch.

“Really, you just let them be bees,” she said.

The congregations have named the project “Bees Bring Hozho to Navajoland”; “hozho” means harmony in one’s relationship with nature. It has come together over a short period with support from many corners, most recently through a $22,000 grant from the Episcopal Church’s United Thank Offering program. Bee hives already are installed at Good Shepherd and St. Christopher’s Mission in Bluff, Utah.  More may arrive at San Juan Mission in Farmington, New Mexico. 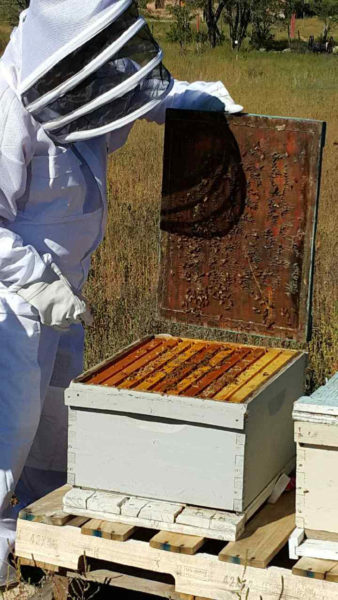 Paula Elmore, the mission’s lead gardener and one of the people overseeing the fledgling beekeeping operations at Episcopal missions on the Navajo reservation, tends to the bees. Photo: Good Shepherd Mission

And an indirect goal is to highlight how Native American and Episcopal spirituality overlap in their appreciation for God’s creation.

“As Navajo, we understand the Earth to be a living being who gave life to us as a people. We are connected intrinsically to her and feel a kinship for every living thing that inhabits this planet with us,” the UTO grant application says. “As Episcopalians, we believe we must honor God’s creation by stewarding Earth’s precious resources. This project allows us to live fully in both beliefs.”

In a way, being stewards of precious resources means adapting to the environment and working with what you have.

The Rev. Cynthia Hizer became the vicar at Good Shepherd in early 2015 and noted that some of the mission’s 50 acres had been taken over by Russian knapweed, an invasive species that makes it hard for other plants to grow.

“I come from a background of organic farming and permaculture,” said Hizer, who previously served in the Diocese of Atlanta and oversaw an agricultural ministry there. “And the first question we ask is, ‘How can I make this enemy my ally, how can I make it my friend?’”

In the case of the knapweed, Hizer concluded the answer was honey because the invasive plant produced a sweet pollen that, when collected by bees, could sweeten a hive’s harvest. With that in mind, as she pursued a series of grants early in her tenure at Good Shepherd, she applied for one from a Diocese of Texas program and received $3,000 to be used as seed money for a beekeeping operation.

A separate effort was underway at St. Christopher’s Mission, where the Rev. Leon Sampson, a deacon, had been talking with a local beekeeper about starting a hive there. The beekeeper volunteered to give the mission the specialized boxes needed to house a bee colony. That was about a year and a half ago, and the effects of the pollination were almost immediate, Sampson said.

“The first year we started to see a significant change in our vegetation,” he said, crediting the bees’ pollination assistance for the increase in production of peaches, apples and apricots in the mission’s orchard. 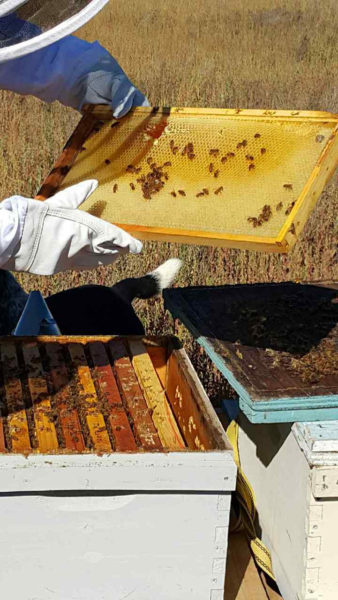 This year, more boxes have been added to accommodate more colonies of bees. Sampson’s 16-year-old son, Trevor Lee Sampson, is one of two people maintaining the hives there, and he was able to harvest three quarts of honey. Good Shepherd purchased its first hives just this summer, so this season’s honey will sustain the bees over the winter.

Some commercial operations feed their bees sugar water or other substitutes in the winter months so they can harvest more honey. By deciding against that technique, Sampson said, the missions’ honey will remain pure and, presumably, better tasting. The project also disavows pesticides, which sometimes are used to combat mites that infect the hives.

Hizer plans to purchase another 20 hives for next year’s season, likely divided between Good Shepherd and St. Christopher’s. The San Juan Mission isn’t yet participating because no one has been recruited to oversee a beekeeping operation there.

In 1978, the Episcopal Church carved out sections of the dioceses of Rio Grande, Arizona and Utah – areas within and surrounded by the 27,000-square-mile Navajo reservation – to create the Navajoland Area Mission. It was an effort toward unification of language, culture and families. There are now eight congregations in Arizona, New Mexico and Utah. Of the eight bishops to serve Navajoland, Steven Plummer, who died in 2005, was Navajo and the area mission’s only indigenous bishop.

Some 180,000 Navajo live on the reservation, which is about the size of West Virginia. Many people work in extractive industries, such as oil, uranium and petroleum, but an estimated 42 percent of the population is unemployed and 43 percent lives in poverty. Addiction, domestic abuse and suicide rates are high. Where the Navajo have struggled, so has the Episcopal Church in Navajoland.

Bishop David Bailey, assigned to Navajoland in 2010, has set a goal achieving diocesan status by 2024. He also aims to raise up Native leaders so he can hand the reins over to a Navajo bishop by that time. Achieving that goal depends on getting Episcopalians on the reservation invested in the work of their congregations.

Bailey’s hope and enthusiasm continue to rise as many small, business-like enterprises begin to form and succeed.

“While not one of these things will get us to the promised land, by doing several different things … each one of those generates a certain amount of profit which leads us toward sustainability, but also provides some employment that otherwise would not be there for Navajo people,” Bailey said.

When Hizer learned of Sampson’s parallel beekeeping efforts, they joined forces to broaden the focus to include all of the Navajoland Area Mission, and the UTO grant application notes the backing of the Diocese of Utah as a partner.

Sampson, who left Utah this fall to attend seminary in Virginia, also emphasized the role projects like these have in providing work and income for people on the reservation, where poverty is a stubborn problem. Teach people farming, beekeeping, soap-making or another trade, and they can become self-sufficient and get beyond what Sampson calls a “poverty mentality.” 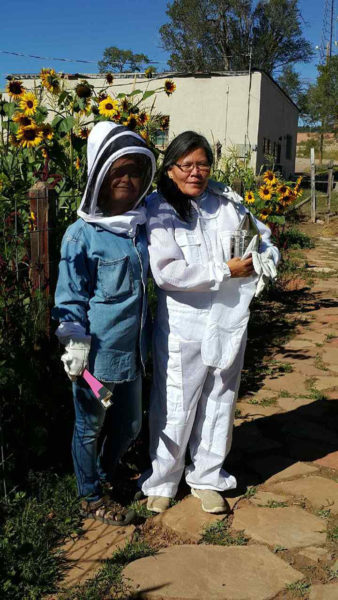 There also is a joy in working the land. Elmore’s roots go back generations at Good Shepherd, where her grandfather was a Navajo interpreter for its English-language worship services.

“This used to be my playground,” she said of the land around the mission.

She started working in the mission’s garden purely out of love for the land and became the mission’s part-time gardener about a year and a half ago. The bees have been a learning experience, and not just for her. Her teenage daughters sometimes tag along to help, and school groups have visited the garden on field trips.

“Some of the students that come around, they want to go out there, and they’re interested in the bees,” said Elmore, 52, adding that she reassures anyone with a fear of bees that there’s no need to be scared. “I tell them, ‘They’re just busy.’”

Sampson’s son, too, was nervous at first. So one of the first lessons, Sampson said, was to remain calm, to see beekeeping almost as a kind of meditation.

The bees are a subject of Sampson’s meditations. He sees in them as a metaphor for gardening at the reservation’s missions, with its themes of sustainability, nature and spirituality.

“Bees have this certain way of committing to working for the queen bee and producing for her a type of food,” he said. “That’s the same concept that we have in our Episcopal garden: to grow what you can eat and live a more active life so we can get back to more traditional ways of prayer.”