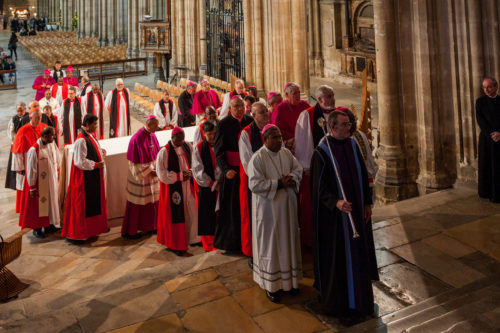 [Anglican Communion News Service] Thirty-six Anglican and Roman Catholic bishops from 19 countries are in Canterbury at the start of a historic week-long summit marking closer ties between the two traditions. Events will include a service in Rome on Oct. 5 jointly led by Archbishop of Canterbury Justin Welby and Pope Francis at which the bishops will be formally commissioned to work together in pairs.

Services at Canterbury Cathedral over the weekend have illustrated the deepening relationship between the Anglican Communion and the Roman Catholic Church. On Oct. 1, Diocese in Europe Suffragan Bishop David Hamid delivered the homily at a Roman Catholic Vigil Mass in the cathedral’s undercroft. The Roman Catholic Archbishop-elect of Regina in Canada, Don Bolen, preached the sermon at the Sung Eucharist on Sunday morning, Oct. 2.

Hamid spoke of the growing sense of unity, common faith and common calling, while acknowledging that issues remained to be resolved. But he said only a little faith was enough for something new to be possible.

Bolen said it was a great privilege to be in Canterbury. He said the bishops had realized they had so much in common – including a common faith in God, a common baptism and the sharing of scriptures and creeds.

“We have come to realize we are bound by dear, dear affection,” he told the congregation.

The bishops have been chosen by their home churches to represent them on the ecumenical body, IARCCUM – the International Anglican Roman Catholic Commission on Unity and Mission. They include representatives from Pakistan, Brazil, Papua New Guinea, Canada, Ireland and Malawi. They have spent the weekend sharing their experiences of faith and mission. In the days ahead they will look at how they can work together to address the challenges they face.

The summit also marks the 50th anniversary of the Anglican Centre in Rome. There will be a gala dinner hosted by the archbishop of Canterbury to celebrate its work. The center’s director, Archbishop David Moxon, told BBC Radio 4 that strong, clear strides towards greater unity had been taken over the past 50 years. He said he believed full unity between the two traditions was possible. He said there was now as much as 85 percent agreement across core doctrine but it would be a demanding process and take time to address the remaining 15 percent.