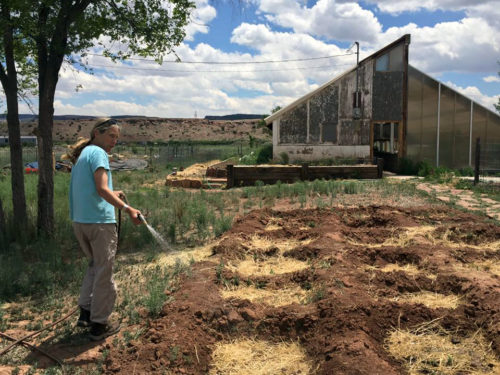 [Episcopal News Service] Arizona may sound like the last place you’d find a dynamic agricultural enterprise, but the work underway in the Navajoland Area Mission is gathering the seeds of history, culture, tradition, environmental stewardship and spirituality to cultivate a local ministry with sky’s-the-limit potential for a small Episcopal congregation here.

Gardening has been alive for decades at Good Shepherd Mission in Fort Defiance, Arizona. Now, local leaders are looking for ways to expand those efforts while emphasizing conservation, particularly of water. Native American traditions and Episcopal teachings overlap on that point – the importance of protecting the Earth and our God-given resources, said the Rev. Cynthia Hizer, Good Shepherd’s vicar.

“The indigenous people have been the environmentalists for as long as they’ve been here,” Hizer said. “The way they step out into the world is honoring creation.”

The latest initiative to till this fertile ground is the Protecting the Precious water conservation project at Good Shepherd Mission, which this week is installing a rainwater collection system to augment the congregation’s farming operation. An additional component of the project will involve teaching water-saving farming techniques to would-be farmers on the Navajo reservation.

“Water is such an issue in the West,” Good Shepherd head gardener Margaret Putnam said. The mission’s half-acre garden uses a drip irrigation system fed by municipal water, but the congregation hopes to plant a full field of crops on an additional half acre with the rainwater it collects.

Conservation is itself a goal of the project, Putnam added. Using less municipal water is the right thing to do, especially in a dry climate like Arizona’s. 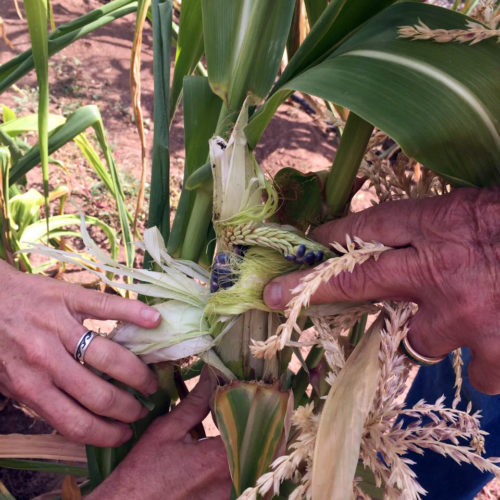 Rain collection at Good Shepherd has been backed by a $41,500 grant from the Episcopal Church’s United Thank Offering program, or UTO. The grant application noted that the high-desert region has a long history of farming and animal grazing, but those traditions have diminished over the decades, partly because of environmental degradation.

A particularly shocking and devastating recent case was the accidental release of toxic chemicals into the Animas River from a former Colorado mine in August 2015. The waste from that spill made it all the way to the San Juan River, one of the water sources for the Navajoland farm at St. Christopher’s in Bluff, Utah, and some of that mission’s crops were wiped out.

Since then, St. Christopher’s has decided to tap into artesian wells for some of its crop irrigation, so it doesn’t have to rely solely on the river anymore, said the Rev. Leon Sampson, a deacon.

The Protecting the Precious grant application also notes that decades of mining has lowered the water table on the reservation and contaminated much of the remaining water. Nutrient depletion, erosion and pesticide use are other factors that pose challenges to Navajo farmers.

The solution proposed by the water conservation project at Good Shepherd starts small but has growth potential as the congregation leads by example and teaches conservation to others.

“It excites us to think that those participating in this initiative will deepen their respect for the land,” Navajoland’s grant application said. “Protecting the Precious can transform how we interact with the natural world.”

Navajoland is a collection of Episcopal missions in Arizona, New Mexico and Utah that serve the 250,000 people on the 27,000-square-mile Navajo reservation. The missions technically don’t make up a diocese because they still are working toward becoming financially self-sustaining. An estimated 43 percent of the Navajo population lives under the poverty line, so Episcopal leaders are looking to entrepreneurialism to achieve their goal of self-sustainability and to lift others out of poverty.

There’s the beekeeping operation that is taking shape at Good Shepherd and St. Christopher’s. The missions are working together to turn blue corn flour production into a cottage industry. And Good Shepherd’s hand-made soaps business is taking off.

Hizer has been a big part of that growth since she arrived early last year, and recently she was named to Navajoland Bishop David Bailey’s staff as canon for development and social enterprise.

“I came with a passion,” said Hizer, who previously served in the Diocese of Atlanta and oversaw a garden there. 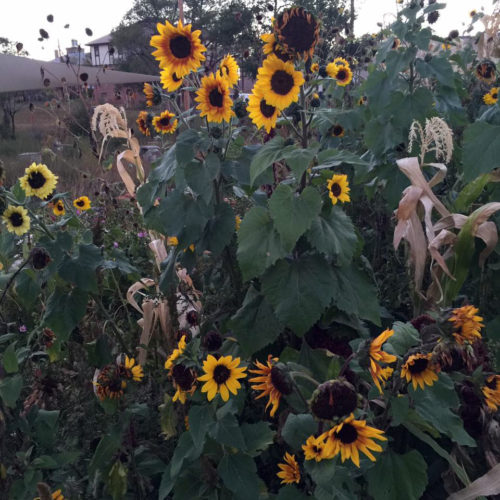 Putnam had worked with Hizer as a church gardener in Atlanta, and the two women were recruited for Good Shepherd because of that expertise. Along with a passion for farming, Hizer and Putnam brought with them knowledge of different cultivation techniques, some of which are being put to use at Good Shepherd.

One efficient method for conserving water is planting in waffle beds: A garden plot is crosshatched – like a giant waffle – building up the dirt so that water collects at the bottom of each square and doesn’t runoff.

“There is water,” Hizer said. “You just have to get it in the right place and not let it go downhill.”

But such conservation techniques only collect rainwater that falls on or next to the half-acre garden, squandering plenty of rain that falls elsewhere. With its UTO grant, Good Shepherd will start collecting rain that falls on three of the mission’s 12 buildings, especially in the rainy season from late June to early September, and funnel it into tanks holding thousands of gallons of water that then can be used to irrigate the crops.

More water will enable Good Shepherd to double its growing capacity when it adds a half-acre field to its garden plots, Putnam said.

The garden already is a focal point socially for the congregation. The hours following Sunday worship are particularly ripe for members to work the soil, Hizer said. After coffee hour, some head down to the garden plots and plant or pick vegetables, or they may discuss traditional Navajo recipes they will use when cooking up the fresh harvest.

In the past, the garden has grown a wide variety of vegetables for the congregation to prepare and serve, as well as to sell at a local farmer’s market. This year, while still growing squash, beans and sunflowers, the primary focus has been blue corn, because Good Shepherd is working with St. Christopher’s on a UTO-backed project to brand and market blue corn for sale as flour.

Farming is a pastime that reaches back generations. Maggie Brown, a senior warden at Good Shepherd, grows some corn on her property, just as her father did before her. Some parts of the crops, like blue corn pollen, also play a role in traditional Navajo ceremonies, she said.

Brown sees value in farming as an outreach opportunity for the mission.

“Working on the field gives us a chance to mingle with the congregation and whoever is there to help,” she said.

Sampson, the deacon at St. Christopher’s, was instrumental in creating and developing what is known as the Homer Dale Community Farm there, first as farm manager and later as a deacon. His farming has a strong spiritual side, incorporating prayer and showing humility, and he saw the mission farm as a way to bridge the gap between elders who grew up with farming and young people who have lost connection to the land.

“We created space for teaching the next generation,” Sampson said.

One child told Sampson of his farm back home – he said it had zombies that ate the onions. Sampson realized the child was talking about a video game. “Our zombies are called chipmunks and rabbits,” he told the boy, before sharing real-world lessons in gardening and faith.

“Really, the farm grew in spirituality and community,” he said.

Good Shepherd Mission is near the tribal seat of government in Window Rock, Arizona, and Hizer envisions partnering with tribal authorities to educate reservation residents on farming techniques. She also has an idea for a Food Network-style cooking show featuring recipes that use ingredients familiar to the Navajo.

For now, she and the rest of the Good Shepherd congregation have plenty to do as their expanded farming ministry takes root.

“With each little success that we have, we can expand a little bit,” she said.