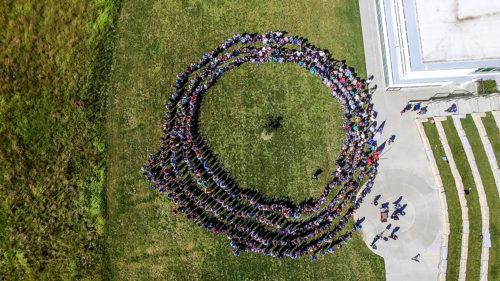 Members and visitors of Omaha’s Tri-Faith Initiative this year constructed a peace circle in remembrance of the 9/11 attacks. Photo: Countryside Community Church

[Episcopal News Service] In the middle of a polarizing election season that has drummed up a deep mistrust of immigrants and Muslims in particular, a patch of 35 acres in the heartland has become a living symbol of what it means to “love thy neighbor.” In Omaha, Nebraska, Jews, Christians and Muslims are finding common ground and creating a shared community on the campus of the Tri-Faith Initiative.

The initiative has its roots in a surprisingly “mundane conversation” that took place more than 10 years ago about mutual needs for parking and land. Leaders of Temple Israel and the American Institute of Islamic Studies and Culture (now the American Muslim Institute) quickly deepened the dialogue, and it then shifted towards the importance of interfaith work between the two communities. Soon after, the Christian faith joined the conversation via the Episcopal Diocese of Nebraska.

The Tri-Faith Initiative, which was officially formed in 2006 representing the three Abrahamic faiths, continues to evolve as the physical manifestation of an idea, a multifaith campus with a synagogue, mosque and church. The original site, purchased by the initiative in 2011, had been the only country club in Omaha that allowed Jewish members. Temple Israel was the first to open its doors on the Tri-Faith campus in 2013. The American Muslim Institute broke ground last year with plans for its mosque and educational center to be finished by Ramadan 2017. Countryside Community Church is raising money for its new church, with the hope of opening it by 2018. The Tri-Faith Community Center will be the final building, bringing the campus to completion by 2019. 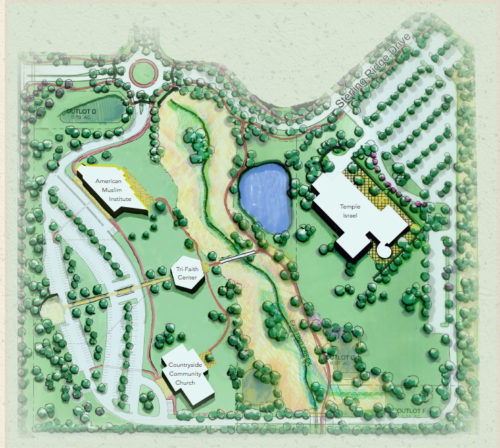 The initiative is creating a dialogue between the religions in myriad ways from outreach outside of the city to dialogues between mixed faiths at local Kiwanis clubs. On the campus, free public educational sessions and activities, such as Jewish, Christian and Muslim children making gingerbread houses together, have helped bring the members of the three faiths closer to one another. Last spring, The Daily Show on Comedy Central caught wind of the initiative and working what sounds like the start of a joke – a Christian, Muslim and a Jew walk into a bar – into a segment. The producers filmed the Tri-Faith’s leaders at a local pub, Sean O’Casey’s, to discuss the trifaith campus with good humor. The Tri-Faith Initiative took this idea and ran with it – hosting many informal get-togethers at the pub to help the public discuss, debate and imbibe with trifaith leaders and members. Every activity is an opportunity for three faiths to understand better and support each other’s communities.

“The truth about Nebraska is that folks around here are pretty tolerant of even profound differences between themselves and their neighbors. People here understand that at the end of the day, we are all in this together,” said Bishop J. Scott Barker of the Episcopal Diocese of Nebraska.

There have been changes inside the initiative itself, namely the handing-off of the Christian arm in 2015 by the Diocese of Nebraska to the congregation and religious leaders of Countryside Community Church, which is part of the United Church of Christ.  “It was not an easy decision,” said Barker, “but it was the right one for the diocese. As the project grew in scope and scale, it became clear that the fundraising footprint required of the Christian partner would be far beyond what our small diocese could handle,” he said.

“It’s sad not to be the Christian-faith partner because I know this is going to be an extraordinary thing, but it also felt like a real act of faith to hand over the leadership role to a community that is better suited at this moment to do this thing,” added Barker. “I truly believe the Holy Spirit is behind this hand-off to Countryside Church.”

The Rev. Eric Elnes, head pastor at Countryside Community Church, said taking part in the Tri-Faith Initiative was a no-brainer for him when he first discussed it with Barker. “I had heard rumors of financial trouble in raising the millions needed to rebuild a church on the campus, so I reached out and said, ‘How can we help?’ and that started a season of formal dialogue between the Diocese of Nebraska and our church, and then resulted in them suggesting that we take over the Christian partnership from them,” Elnes said. “I do hope in the future we will do something together. I am a big fan of the Episcopalians personally, and I would love to have an Episcopal service in our church when it is built.”

First, the congregation voted whether or not there was an interest in joining the initiative and moving to the campus. Next, came a 40-day investigation to dig further into the possibility and explore the process itself. And they examined the cost of rebuilding the church on the Tri-Faith campus. “Over 70 percent [of the congregation] agreed and said, ‘Yes, this is God’s vision for us,’ so we accepted the diocese’s offer on April 12 of last year. As a result, 100 families left the congregation, but we don’t hold grudges; maybe some of them will return,” said Elnes.

The cost for building the church is $25 million. “We decided to build the greenest church in America,” he added. “We want to make a positive environmental statement with our church.” A fundraising campaign is underway and at the time this article was written, the church was only $1.25 million away from meeting its goal.

“The work being done here is magnificent,” said Rabbi Darryl Crystal, one of the interim rabbis for Temple Israel. “I’ve been in 13 cities in the last 14 years, and I have seen many things in this country and worked actively on immigration reform. This initiative here is just tremendous.” Crystal came on board when Rabbi Aryeh Azriel, one of the founders of the initiative, recently retired. “Azriel is still active within the community,” said Crystal. “He is really a prophetic voice here. He is originally from Israel and his belief in justice is just incredible.”

Crystal said he has arrived at a pivotal time for the Tri-Faith Initiative. He recalled a few weeks ago in September when 500 people created a peace circle on the grounds of the campus to remember the horror of 9/11 and honor the cause of peace and goodwill among faiths. “I am honored to be here. It is an exciting time as the initiative is focusing on the completion of its campus and how the vision of this campus will come to life.”

Despite not having a fully functional campus, upcoming events include an annual Tri-Faith picnic and a winter gathering where stories and holiday sweets can be shared. And a retreat is planned for the spring of 2017. “Things are progressing very quickly now, and the initiative is gathering real momentum,” said Crystal.

The Muslims are planning future programs and searching for an imam to lead their congregation when the mosque opens. Dr. Syed Mohiuddin, president and co-founder of the American Institute of Islamic Studies and Culture, now the American Muslim Institute, is a spiritual leader within Omaha’s Muslim community. “I have been in Omaha for almost 40 years,” said Mohiuddin, who is also a cardiologist.  “It is a very, very welcoming community. I believe that the reason the Tri-Faith Initiative was able to become so active is because of the Midwestern culture being supportive of different cultures and religions,” he said.

For now, the Temple Israel is the only operating place of worship on the campus, but not for long. “We hope this larger mosque will have the ability to support a growing Muslim population in Omaha,” Mohiuddin said. “I think if people will learn to accept that we are all human beings, even if we may practice different religions or pray to God in a different way, then the world would be a much better place. This is our message here.”

– Maya Dollarhide is a freelance journalist based in the Hudson Valley. She grew up in the Episcopal Church.