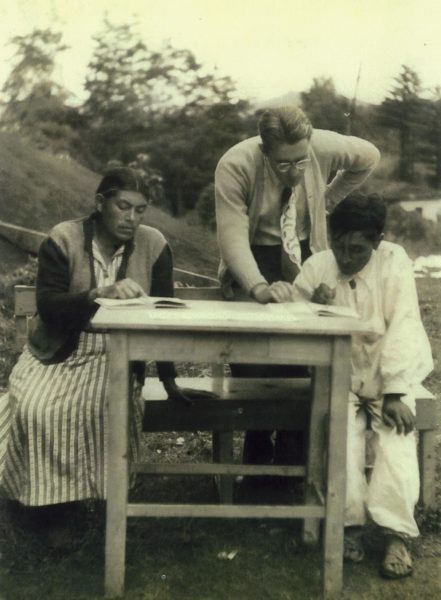 Thomas E. Fountain teaches reading to Central Americans with his biblical character stories in the 1940s.

[Episcopal Diocese of West Texas] When she was an infant, Sarah Willingham’s father and mother loaded her in their 1939 Plymouth, hooked up a trailer filled with their household furnishings and an old pump organ, and headed off to Mexico. It marked the beginning of a journey that would take them on a lifelong mission of bringing the Gospel to Spanish-speaking peoples around the world.

Thomas E. Fountain, or Tomás de la Fuente as he was known in the Spanish language books he wrote, was driven by a desire to spread the Bible to the indigenous people in Mexico, Honduras and other South and Central American countries. A prolific author in English, he expanded his writing skills to translate Bible stories into Spanish and retell them in a culturally sensitive way so that those with limited literacy could read, understand and apply their lessons to their own lives.

Among his books for this audience was a series on biographical characters in the Bible, starting with Abraham, followed by José (Joseph) and then Sara. They have been out of print for years but now, nearly 75 years after she travelled to Mexico with her parents, Willingham is bringing them back to life.

A member of St. Mark’s Episcopal Church in San Marcos, she has started Libros de la Fuente, a not-for-profit publishing house in Wimberley, located southwest of Austin. Her goal is to bring her father’s books back into print and placed into the hands of Spanish speakers today by parishioners on mission trips from the Episcopal Diocese of West Texas and other Episcopal churches and denominations. Willingham said the books also have a place in Spanish-speaking congregations in the U.S. as well.

Her work started about nine years as Willingham came across her father’s booklets after his death. “Pretty soon the Holy Spirit was poking at me” to reprint them, she said. Working under her Spanish name, Sarita de la Fuente, she did some editing on her father’s original work, and then tested their readability based on a program developed by her sister. “We have it at a grade level that not only is useful for the person who has basic reading skills but all reading levels as well,” she said.

In addition, she developed study questions for the books so that they can be read all the way through or in segments.

Currently, she has published the books on Abraham, Sarah and Joseph, but has plans to add more, including reprinting some of his other titles on the Parables and Jesus. “He wrote 18 of these,” she said. “Right now we have only the first three.”

She’s also planning to write one herself on Isaac, based on instructions left by her father on how to write for this particular audience. “We’re naming it Isaac and his twin sons,” she said. “We’re trying to give it a little bit of a family feel to the title.”

The books cost $7 each. The Diocese of West Texas is making the booklets available to team leaders going on mission trips to Spanish-speaking countries, said Marthe D. Curry, the diocese’s director for the Center for World Missions.

“Everyone has loved them,” Curry said. “We will be pushing them more this fall with the new Sarah editions.”

The diocese was also planning to offer them as part of a panel workshop on Sunday schools in the Mexican churches held in conjunction with Frontera Unida, a partnership of the clergy of Rio Grande Valley and New Mexico diocese.

The Episcopal Church’s Office of Latino/Hispanic Ministries is also aware of the books. They have been used by other denominations as well.

“People from Mexico in particular said that doesn’t read like translation speak,” she said. “It’s like it was written for me rather than written for someone else and translated for me.”

She said readers feel the books make the biblical characters more approachable “and pertinent to their lives today. One person said that up until now these people were like cardboard characters or icons on the wall. Now they seem real to me.”

Raised in New Jersey, Fountain’s work began with a draft deferment during World War II. Being a husband, father and Baptist minister, he was given a draft deferment for the military. However, he still wanted to help others through his ministry.

Although he spoke nary a word of Spanish, he joined up with the Mexican Indian Mission group, was sent to Mexico City to learn the language, and then sent to rural Mexico in Husuchinango, Pueblo.

“Dad felt these people really needed to read scripture,” Willingham said. The problem was that many had such a limited literacy level, people “were totally intimidated by trying to read the Bible at their skill of reading.”

“He discovered that because of the limited readership that even those in seminary had a hard time with translated materials,” she said. “Some of the cultural bias was one thing. The other was that sometimes the vocabulary was just beyond them.”

“That became the foundation for what he did,” she said. “He decided to go back and get an advanced degree in literacy and went to Honduras with the objective of teaching people how to read. They had only a 40 percent literacy rate. He felt that was fertile ground.”

He used radio programs to reinforce readings and “then said to himself that he needed to find things for them to read. That’s when he began writing these booklets,” she said.

“He took different biblical characters and retold their story in contemporary language and used a vocabulary list that inexpert readers or the newly literate could understand,” she said. “What he discovered was that not only did these people who were newly literate respond to these but a lot of the ministers and Bible study leaders found the material very useful.”

Ministers even began referencing his work for sermons and Bible study leaders used his material for their work.

“He really wanted folks to feel a personal connection with scripture and with the Gospel,” she said. “That it was not something that was out there but it was something they could really relate to.”

Writing the books of Bible stories was not Fountain’s only publishing success. He also formed a publishing company in Mexico with offices in Costa Rica and published the writings of many Christian authors as well as some of his own work. One of his most notable books was Hermeneutics, which is still being used in some seminaries in South America.

“He wrote all the time,” she said. “His passion was for people to really be able to access scripture. If they felt that the Bible that was put in their hands was beyond their capability to understand then there had to be another way to help them access that. That was really his passion, that they know the Gospel, that they know the Bible.”

Willingham’s vision is to carry on her father’s mission by continuing to provide material that’s readable for any level, primarily in Spanish. For more information, contact Libros de la Fuente at delafuente.libros@gmail.com.

— Mike Patterson is a freelance writer and photographer. He attends St. Michael and All Angels Episcopal Church in Blanco, Texas.