The Rev. Michael Hunn, canon to the presiding bishop for ministry within the Episcopal Church, films the House of Bishops on Sept. 20 for inclusion in a video version of the house’s “Word to the Church” released at the end of the Sept. 15-20 meeting. Photo: Mary Frances Schjonberg/Episcopal News Service

[Episcopal News Service – Detroit, Michigan] The House of Bishops spent part of the last day of its meeting here discussing diversity in the bishop-election process, as well as impairment of church leaders due to substance abuse and mental-health issues.

Also on the final day of their Sept. 15-20 gathering, the bishops called on the entire Episcopal Church to “set our sights beyond ourselves and to minister to the several nations where we serve and the wider world.” The full text of “A Word to the Church for the World” is here, along with videos of various bishops reading parts of the letter in English and Spanish.

And the bishops elected the Rev. Carl Wright to be the next bishop suffragan for armed services and federal ministries. Details of the election are here.

After a short discussion, the bishops referred a resolution on diversity in the bishop-election process to the General Convention Task Force on the Episcopacy. The resolution first came to the bishops at their spring retreat. In that iteration it would have had the bishops reserve the option to withhold their consent after any episcopal election that did not include at least two qualified people of color and two qualified women. In the spring, the bishops tabled the resolution until this meeting. They were presented Sept. 20 with a substitute.

The substitute resolution states that the House of Bishops “regrets the extent to which we remain predominantly a body of white males” and commends those dioceses that have elected or included among their nominees women and people “outside the dominant culture.”

Bishop of Oklahoma Ed Konieczny moved to refer the substitute resolution to the Task Force on the Episcopacy because the house heard earlier in the day that the group’s preliminary work shows that the slates of nominees in some recent elections diocese were diverse, but the electors were unwilling to consider that diversity.

Not all bishops agreed with the referral.

Bishop Suffragan Dena Harrison of Texas, referring to herself as “one of the categories of people referenced in this resolution,” told her colleagues that after 10 years in the house she had “grown very weary of this house’s propensity to refer to others the responsibility” for educating dioceses about accepting people other than white males as bishops.

“We just observed that by the time an election occurs it’s too late; that if the leadership of the diocese has not prepared the culture to accept women of color, men of color, women, it’s not going to happen. And I find it very disingenuous that this house is so facile with instructing other groups about their responsibilities in this area,” Harrison said. “If this house wished to seriously consider making change, it would have a very different approach to this conversation.” 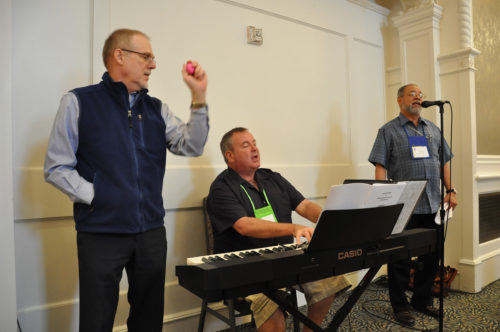 In addition to talking about the diversity issue, task force member Bishop of Northwestern Pennsylvania Sean Rowe told the bishops earlier that the group was also considering such questions as possibly bringing some uniformity to the wide range of titles for bishops who work under the diocesan bishop. Rowe said there are assisting bishops and assistant bishops, for instance. There are also provisional bishops., of which Rowe is one for the Diocese of Bethlehem. Assistant bishops are specifically named in the church’s canons; the others are not.

Rowe said during a short question-and-answer session that the task force doesn’t have any bishops of color but more than half of its members are women.

“No doubt there a lot of folks that would like to see Albany move in a different direction,” Love said, urging caution about whether theological diversity also becomes an issue in elections.

Bishop of Ohio Mark Hollingsworth, vice chair of the house’s Commission on Impairment and Leadership, briefed the bishops on that group’s work. He said that while the group has focused intentionally on impairment due to alcoholism and substance abuse, it has also included “other addictions and personality disorders” in its study. The commission, Hollingsworth said, has been using confidential case studies to understand “the individual and systemic dynamics involved” cases of impairment.

Part of the committee is also developing a theological and ecclesiological context “for understanding the responsibility and accountability inherent in a healthy, safe Christian community,” he said.

The house created the commission by resolution at its March 2015 meeting. The previous December then-Maryland Bishop Suffragan Heather Cook struck and killed a bicyclist while driving intoxicated and texting. In October 2015, she was sentenced to seven years in prison after pleading guilty to automobile manslaughter and three other criminal charges.

The members of the impairment commission have met seven times since November. Hollingsworth said the group plans to make recommendations for action and further review in time for consideration at the 2018 meeting of General Convention.

The bishops’ “A Word to the Church for the World” encourages the church to journey further outward as part of its mission.

“Lament[ing] the stark joylessness that marks our present time” and what they called the widening fissures that are dividing society, the bishops said that it was time to “follow Jesus into our fractured neighborhoods, the nation and the world.”

“Let prophets tell the truth in love. Let reconcilers move boldly into places of division and disagreement. Let evangelists inspire us to tell the story of Jesus in new and compelling ways. Let leaders lead with courage and joy,” the bishops said.

The Spanish video version of “A Word to the Church for the World” includes the entire house saying some of the text in Spanish. Bishop of Arizona Kirk Smith told the house that the videos marked the first time the bishops have used video technology to speak to the church and the first time they have spoken in Spanish together.

The statement follows a previous word to the church issued after the bishops’ March retreat.

In a break with the practice in the recent past, House of Deputies President the Rev. Gay Clark Jennings, center behind table in aqua, was invited to join the House of Bishops for its entire Sept. 15-20 meeting in Detroit. She spoke to the bishops on more than one occasion during the meeting and officiated at Morning Prayer on Sept. 20. Here she poses with all of the bishops present who had served as deputies before their election as bishops. Photo: Mary Frances Schjonberg/Episcopal News Service

Also at the meeting:

* The bishops passed a resolution declaring their “solidarity with men, women and children traveling in search of new opportunities exposing themselves to all sorts of dangers and inhumane situations on the road just to reach the United States.” The resolution also asks staffers assigned to migration work churchwide to pay attention to such migration and to ask the United Nations for help. It also pledges to work with the Province IX diocese to help create awareness in the U.S. dioceses of the plight of migrants and related it to the baptismal promise of respecting human dignity.

* The bishops passed a resolution calling for the presiding bishop to have staff compile a spreadsheet of diocesan financial information for the bishops’ spring 2017 meeting to aid them in their ongoing discussions about what the resolution’s explanation calls “an appropriate percentage apportionment from each diocese.”

* Tara Elgin Holley, director of development for the Episcopal Church, briefed the bishops on a plan to create a churchwide annual fundraising appeal beginning in the fall of 2017 focusing on the priorities and goals of Presiding Bishop Michael Curry, highlighting the work of the Jesus Movement and the new work around racial reconciliation and racial justice. Holley said such a campaign would not only raise money, but would also provide a way to communicate the work of the church and “serves as the means of discovering and building common ground around the nation and the world.” There has not been an annual campaign of this sort since the Venture in Mission campaigns of the late 1970s and early 1980s that raised $180 million.

* Mary Kay Wold, president of the Church Pension Group, on Sept. 19 updated the house on CPG’s multiyear effort to develop proposals to increase the fund’s flexibility and fairness, and simplify its processes. Wold predicted that a final set of proposals would be presented to the CPG board later this year with an expectation that they would go into effect in 2018.

* Between 50-60 of the nearly 185 bishops, spouses/partners and staff members present fell ill with a stomach ailment, beginning on Sept. 16 and continuing until at least Sept. 20. Many of those who became ill missed one or more days of the meeting and others left Detroit early. The city of Detroit’s health department on Sept. 20 asked the meeting’s participants to fill out a three-page form about their symptoms and what they ate on Sept. 15 and 16.

The House of Bishops met at the Westin Book Cadillac Hotel in downtown Detroit. Some bishops and others tweeted about the meeting using the hashtag #hobfall16.