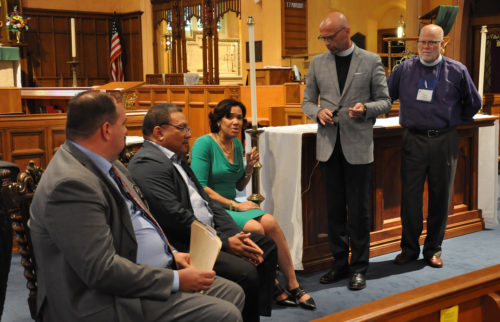 [Episcopal News Service – Flint, Michigan] Even before the water crisis in Flint, Michigan, became a federal emergency in late January, the Episcopal Diocese of Eastern Michigan was distributing water and partnering with other churches and groups to respond to what Bishop Todd Ousley calls government’s “systematic, intentional neglect” of city residents.

In Flint, as in many of the parts of Michigan suffering from the decline of the auto industry, “there is an ongoing, systematic ignoring of the plight of people in poverty and people of color,” Ousley told a group of bishops, their spouses and others who joined him on a Sept. 17 trip to Flint.

Sixty percent of the city’s roughly 96,000 residents are African-American and 41.6 percent of Flint’s residents live below the poverty line, one of the highest poverty rates in the United States.

The Episcopal Church in eastern Michigan recognized that it was called to respond to the human need in Flint and the response became evangelism by action, Ousley said. And Episcopalians responded “in relationship with the people who are telling us their concerns and what their needs are,” he said.

The Sept. 17 trip was part of the House of Bishop’s Sept. 15-20 meeting underway in nearby Detroit.

The water crisis has become a way for Eastern Michigan Episcopalians to “intentionally live into the Baptismal Covenant in a way that we had not been challenged to in the past,” Ousley said.

The call to relieve Flint residents’ short-term needs, and to advocate for long-term solutions and systemic change, is what Ousley called a “clear intersection” of all of the Baptismal Covenant’s promises.

“You couldn’t say this was just a justice issue or this is just a dignity issue; this is just a good news issue,” he said. “It was wrapped up in the entirety of the Baptismal Covenant.” 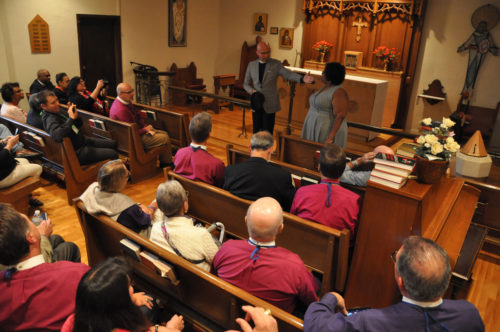 The Rev. Dan Scheid, rector of St. Paul’s Episcopal Church in Flint, introduces Danielle Brown, executive director of Christ Enrichment Center, who spoke about how Flint needs people who are inspired to ministry and who are also knowledgeable or willing to learn about what the city needs. Photo: Mary Frances Schjonberg/Episcopal News Service

Or, in the words of Danielle Brown, executive director of Christ Enrichment Center, “You can’t throw away a whole city in my presence.”

But “throwing away a city” is what Ousley said has been happening in Flint for decades.

Michigan has long held a reputation for being a leader of the anti-slavery movement, and later for creating unprecedented upward economic mobility for African-Americans, said Ousley. “But it also has the history of being yet another one of the playing fields for white dominance and a reframing of slavery,” he said.

Ousley argued that the post-World War II northern migration of African-Americans to Michigan ushered in an era when white autoworkers either moved up into the industry’s management ranks or left for jobs elsewhere.

As the U.S. auto industry began its decades-long decline, Flint suffered economically and eventually lost more than half its residents.

All the while, the need for a clean water supply in Flint was ignored for years, Ousley said, as General Motors pumped “billions upon billions of gallons of waste into the Flint River, which was the drinking supply for the city,” Ousley said. The river became so polluted that Flint officials began accessing Detroit’s water system. The price Detroit charged made Flint’s water rates the highest in the country, Ousley said.

Ousley said he sees Flint’s story as partly one of environmental racism with “a long pattern of locating persons of color in areas where there was likely to be a high contamination in soil or in the waterways.”

There are now acres of abandoned land in Flint were GM auto plants once stood and the GM Flint workforce has dropped from 80,000 to 5,000. As the tax base declined, city officials, and more recently, emergency managers appointed by the governor and with almost unlimited powers, began selling off municipal assets to pay the bills.

“Everything had been stripped from us,” Mayor Karen Weaver told the group during a stop at St. Paul’s Episcopal Church in downtown Flint.

St. Paul’s Episcopal Church, which became a water distribution point, is an example of how those economic forces played out in people’s lives. General Motors was founded in Flint and only later moved southeast to Detroit. St. Paul’s was once know as “General Motors directors at prayer,” Ousley said.

Now, the parish is a “shadow of what it once was” in terms of finances and members, but it has a rich legacy of endowments from those past members. Those endowments are contributing to its ministry to the Flint residents left behind.

In April 2014, Flint’s emergency manager, in a money-saving measure, ordered the city’s water supply be switched from Detroit’s municipal water system temporarily to the Flint River until Flint could construct its own water pipeline from Lake Huron, the source of Detroit’s water. At the same time, the emergency manager, seeking to save $100 a day, the bishop said, ordered that the water not be treated with a chemical to prevent lead from leaching out of pipes into the water running through them. The state had, mistakenly, told Flint officials that federal guidelines did not require the chemical treatment, according to the New York Times.

Then followed a series of falsified tests, ignored warnings and disregard of residents’ complaints of discolored and bad-smelling water, and skin rashes. In October 2014, General Motors switched the water supply for its remaining Flint operations to Lake Huron because Flint water was corroding metal parts in its factories.

Long before state and local officials switched the city’s water back to the Detroit system and recanted their assurances about the safety of Flint’s water, churches and other community organizations went to work. 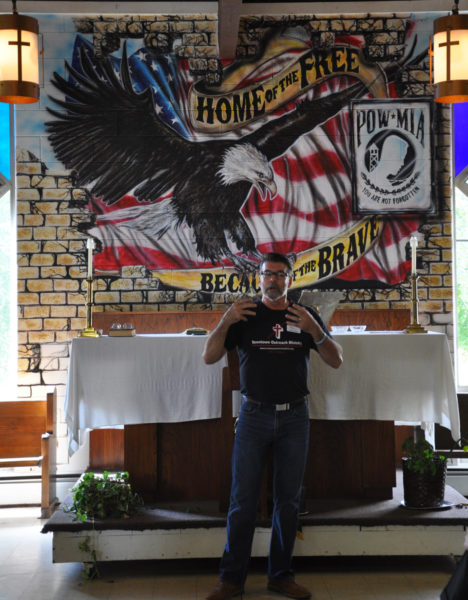 “The grace of God just blew through this place” in the day after the extent of Flint’s water crisis became clear, said Craig Leavitt, a former General Motors metalworker and current St. Paul’s junior warden who runs Flint’s Downtown Crossover Outreach Ministry. Leavitt spoke at St. Andrew’s Episcopal Church, on the city’s east side to a group of bishops, their spouses and others on a tour of Episcopal Church ministry sites in Flint. Photo: Mary Frances Schjonberg/Episcopal News Service

“Almost before (Flint Mayor) Karen Weaver could open her mouth to say we have lead in our water, they were there,” he told the group during its stop at St. Andrew’s Episcopal Church, on the city’s east side.

Grants also came from the dioceses of Eastern and Western Michigan, and donations came from parishes across lower Michigan. St. Paul’s partnered with St. Andrew’s Episcopal Church and Christ Enrichment Center, along with other organizations, to give residents access to clean water. The outpouring of contributions was tremendous and Ousley said “we probably have enough bottled water to get us through decades.”

Collaborations forged in those early days continue now with a focus on the ongoing needs for decades to come. Those needs include access to and education about so-called lead-mitigating foods, as well as spiritual and psychological counseling. Christ Enrichment Center, founded by nearby Episcopal congregations, is leading the way in meeting many of those needs with education and support.

There is also the question of how Flint residents can afford the cost of replacing water pipes in their homes that have been irreversibly damaged by the corrosive water. Even residents who have the money to do so would be investing it in a house that is worth less than half of what it was in 2008, Ousley said.

And there is another need, Weaver told the group at St. Paul’s: hope, visible signs of hope. The city has begun replacing damaged pipes in the municipal part of the water system and that work is offering a glimmer of that hope. Every home has been able to get a water filter but the filters are installed in kitchens, Weaver said, not in bathrooms and thus most people do no have filtered water for bathing. Homeless people still struggle to find clean water, she added.

And there is still suspicion. Residents were told for months the water was fine; how do they believe those assurances now, asked Weaver.

Meanwhile, the U.S. Senate last week took a small step towards helping Flint. On Sept. 15, in a 95-3 vote it approved the Water Resources Development Act that authorizes spending $270 million to aid Flint and other poor communities that have suffered from lead-contaminated water. It is a helpful sum Michigan Senate Minority Leader Jim Ananich (D-Flint) told the group, but it is still a “drop in the bucket” compared to what his city needs.

However, the bill includes no immediate funding and, instead, approves projects for future federal spending from Congress’s appropriations committees. The House has not voted on the bill and its version does not include Flint, although supporters are trying to remedy that.

It will take faith combined with expertise to face Flint’s future, said Brown, Christ Enrichment Center’s director, who told the group that she is not an Episcopalian but comes to her work with the fervor of an evangelist.

“I am trained as a human services professional but I am also a saint of God” and she told them “if you have a passion for serving God’s people and know what to do, or have a desire to learn how or even to bring people in that know how, then collaboratively you can really see some splendid success within the ministry.”

Ousley said that five years ago when Brown took over the center, its future was in doubt because of inept management, a lack of capacity to do the work expected and infighting among and within the Episcopal churches that sponsored the center. “But there was faithfulness,” he said, and Brown contributed “tremendous sacrifice and creativity” – and calm when the ceiling of her office collapsed on her. Reviving the center meant rethinking congregational and diocesan collaboration, Ousley said.

The center’s growth in ministry is symbolic of the diocese’s response to Flint’s crisis for him.

“I don’t give thanks for a water crisis, but the opportunity to be the church in the midst of that crisis has strengthened us as a church and as individual Christians,” he said.