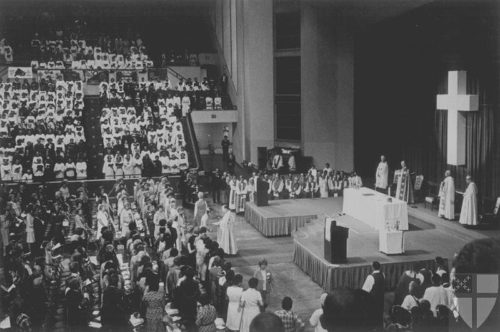 At the 1976 General Convention in Minneapolis, diocesan representatives came forward during the United Thank Offering Eucharist to present their offering for the year. It was the largest sum in history: $1,628,001.12. The Triennial Meeting of the Women of the Church made a total of 75 grants for overseas and U.S. projects. Photo: N. B. White/Episcopal News Service

[Episcopal News Service] Forty years ago on Sept. 16, 1976, the General Convention officially opened the Episcopal Church’s ranks of priests and bishops to women.

When the House of Bishops was reminded of the anniversary at the opening of its Sept. 16 session in Detroit, Michigan, the bishops responded with a sustained standing ovation.

An interactive timeline of the history of women’s ordination in the Anglican Communion is here.

Meeting in Minneapolis, Minnesota, the convention added a new section to the church’s ordination canons that read: “The provisions of these canons for the admission of Candidates, and for the Ordination to the three Orders: Bishops, Priests and Deacons shall be equally applicable to men and women.” (Women were eligible to become deaconesses since 1889 and deacons since 1970.)

Then on Sept. 21, while the church was still meeting in General Convention, the House of Bishops said that the 15  women who had been “irregularly” ordained in the two years before the 1976 action did not have to be re-ordained. Eleven women were ordained at Church of the Advocate Philadelphia on June 14, 1974, and four women were ordained Sept. 7, 1975, at St. Stephen and the Incarnation Episcopal Church in Washington, D.C. 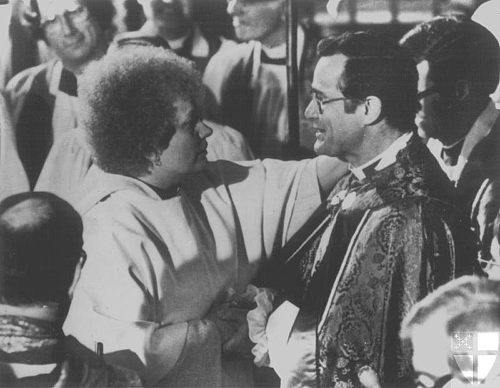 The Rev. Jacqueline Means, the first woman to become a priest in the Episcopal Church under the provisions of a new canon adopted by the General Convention in 1976.  Here she is congratulated by Bishop Donald J. Davis of Erie after the ceremony on Jan. 1, 1977, at All Saints Episcopal Church in Indianapolis, Indiana. Photo: Wide World Photos/via Episcopal Archives

On the last day of the 1976 convention, ENS reported that the bishops and deputies had dealt with “the most controversial and potentially explosive issues to come before the supreme legislative body of the church since the very first such meeting in 1785.” The issues included not only women’s ordination but also a complete and historic revision of the 1928 Book Of Common Prayer into the version still being used today.

“I was in my final year of seminary when that historic vote took place, and the way it has changed the church is really quite incredible in the last four decades, and it also has shaped me and my ministry,” she told the bishops, who gave her a standing ovation when Presiding Bishop Michael Curry introduced her.

Jennings said she thought it was fitting that on the afternoon of the 40th anniversary the bishops will hear from former Sen. John Danforth (D-Missouri), an Episcopal priest, about ministry in the public square. Jennings will be part of a subsequent panel discussion on the subject along with Danforth; Bishop of Washington Mariann Budde; and the Rev. Kim Jackson, chaplain at the Absalom Jones Episcopal Center in Atlanta, Georgia. Curry will moderate the panel.

“I believe that the Episcopal Church’s commitment to gender equality is essential to our ministry in the public square, and I think those of us who are committed to that goal need to be sure we are focused clearly on the church as it is today, not the church as it was on Sept. 16, 1976,” she said.

As the first ordained woman to be elected president of the House of Deputies Jennings said she has a sense of the institutional barriers in the way of ordained women, but she cautioned that “when women are elected or chosen, the work has only just begun.”

When the Episcopal Church “truly answer[s] the call to gender equality, we will strive on behalf of all women in our churches and communities,” she said.

An essay by Jennings marking the anniversary is due to be posted on the House of Deputies website today. A series of essays by other writers will follow over the next few weeks.