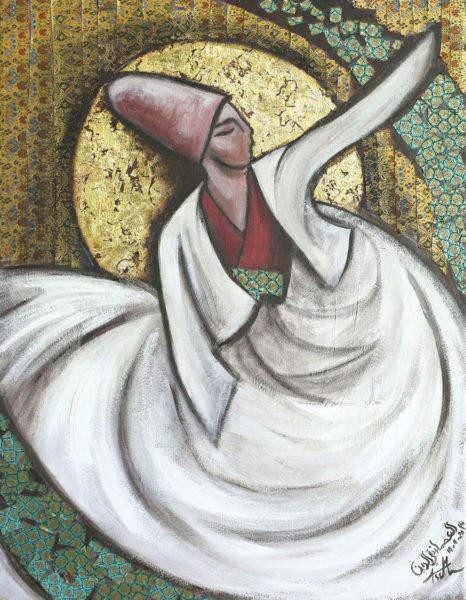 [Episcopal News Service] In the midst of a fierce presidential election campaign that hinges in part on views about immigration and how Americans should treat one another and others, an art exhibit opened earlier this month that seeks to transcend differences in faith and culture.

Sponsored by the Foundation of the Episcopal Diocese of Wyoming, CARAVAN’s “The Bridge” opened Sept. 7 and runs through Sept. 30 in four cities: Laramie, Rock Springs, Lander, and Powell. The East-West traveling art exhibition features the work of 47 Christian, Muslim, and Jewish artists from 15 countries, with a focus on the common threads of the three Abrahamic faiths.

“Art is a catalyst,” said the Rev. Paul-Gordon Chandler, an Episcopal priest and mission partner, and head of the nonprofit CARAVAN that organized the international art exhibit. “It allows us to address very sensitive and very challenging themes in a way so that the walls don’t go up. … The transcendent dimension of art gives us a contemplative, deeper way to speak – and it touches another element within us that traditional interfaith dialogue doesn’t.”

The exhibit originally opened at Church of St. Germain des Pres, the oldest church in Paris in February 2015 – three weeks after gunmen stormed the offices of the French newspaper Charlie Hebdo. Seven cities and 18 months later, the exhibit is making its final stop this month in Wyoming, a few weeks after an anti-Islam group burned a Quran. The same group is calling for a ban of Islam in the state, according to Wyoming Public Radio. 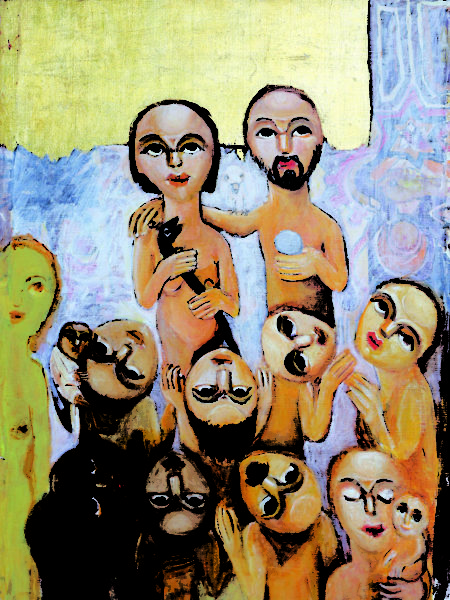 While Wyoming’s population is predominantly white – nearly 85 percent – its moderate population growth is attributed to increasing numbers of minorities. Despite Wyoming’s nickname as the “Equality State,” the state does not have any refugee resettlement programs. When the first mosque opened in the city of Gillette in northeast Wyoming last December, some local residents started a Facebook page, “Stop Islam in Gillette.”

Against this backdrop comes the art exhibit aptly called “The Bridge.”

“The message, in a way, is quite simple: Art of any sort – literature, music, painting – can play a major role in providing bridges between very different faiths and cultures that must exist together on the planet,” said Press Stephens, executive director of the Foundation for the Episcopal Diocese of Wyoming, a Casper-based nonprofit that provides financial and other program support for the Diocese of Wyoming.

“This exhibit offers a glimpse for us in Wyoming of a circumstance that exists in the Middle East where different cultures have to share common space and they have to find common ground.”

A variety of programs, including many sponsored and hosted by Wyoming Episcopal churches, will amplify the exhibit, including poetry readings featuring poems by the Sufi masters Rumi, Hafez, Yunus and Baba Taher; film screenings, including “Blue Like Me,” a documentary about an Indian-American raised in a small Bene Israel Jewish community in India; and discussion forums on topics such as what it’s like to live in the Middle East.

“This is a wonderful opportunity for rural America to be part of this exhibit,” said Stephens. Most of the other locations on the show tour have been large cities, where perhaps the art is “preaching to the converted,” Stephens said, attracting the kind of people who already share similar sentiments. 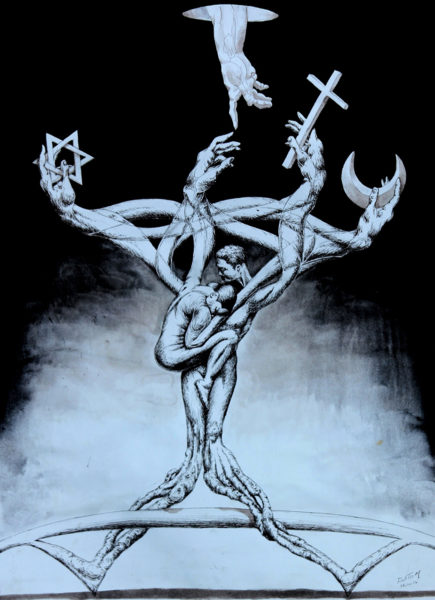 Wyoming’s conservative culture appealed to Chandler. He acknowledged the tension between Christians and Muslims in the state: “We’ve come right into the heart of it, to a place where the stereotypes are quite strong.”

But Chandler believes art has the power to break down walls and to build up relationships.

Although the art was created by dozens of people of different faiths and cultures, “they all resound with one voice: our shared humanity, our commonality,” said Lilianne Milgrom, a Jewish artist and native Australian. Co-curator of the show, Milgrom has witnessed art’s capacity to unleash powerful passions for good and for evil. For instance, she recalls how Nazi propaganda stirred anti-Semitism and led to the slaughter and imprisonment of millions of Jews – including her mother, who survived.

“Art goes straight to the emotions. It bypasses logic,” she said, so harnessing art’s transcendent power for good is vital. “With my mother having gone through the Holocaust, I think it’s particularly important for me to be open, not to listen to my own ingrained stereotypes and biases, and open myself up to people.”

As an artist and now co-curator, she has been amazed by the overwhelming response to “The Bridge” exhibit on its international tour. Thousands have visited the exhibits and participated in programs.

“There is such a need for this. People are hungry for it,” Milgrom said. “There’s so much bad news, so much anxiety and stress. People are saying, ‘Please give us more of this so we can find that there’s another way.’”

She points to a new policy in Italy as an example of how people see art as a tool for transformation. Starting Sept. 15, Italian teens will receive on their 18th birthday the equivalent of $566 to spend at theaters, concerts, and museums. Italy’s prime minister, Matteo Renzi, floated the proposal a year ago after another terrorist attack in Paris. His contention is that art and culture have the power to defuse prejudice and fear. 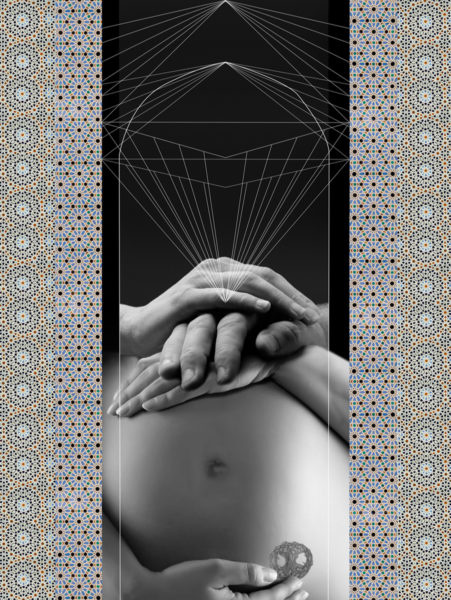 In a speech, he said, “They imagine terror, we answer with culture. They destroy statues, we love art. They destroy books, we are the country of libraries.”

Chandler has committed his life to building bridges between cultures. Born in the U.S., he grew up in Senegal, West Africa, where his father was a Christian minister and most of his friends were Muslim. As an Episcopal priest, his ministry has included work with relief agencies, publishing houses, and as rector of churches in Tunisia and Cairo, Egypt. It was as rector of St. John’s Anglican Church in Cairo that Chandler started using art as a way to encourage understanding and friendships across faiths.

“I have long recognized the tension that often exists between Muslims and Christians,” said Chandler. “And I thought, there has to be another way. I’ve been on a lifelong journey to find a way to bridge, authentically, the gap between the two faiths and the two cultures.”

He recalled how a delegation of 22 imams came to the opening of an exhibit hosted by his church, St. John’s. And they were the last to leave. “I was the first priest they had ever met,” said Chandler. “I thought, ‘We’ve got to change this.’” Working with the imams and others, a priest-imam exchange program was organized through the Diocese of Egypt where clergy leaders live at each other’s homes for a weekend, eating, talking, sharing, and worshiping together. Today 400 imams and priests have gone through the program. “It has profoundly changed the religious leadership’s understanding of each other,” he said.

The experience prompted Chandler in 2009 to establish CARAVAN, which he describes as an international, peace-building arts nonprofit.

“The Bridge” is the latest of nearly a dozen different peacebuilding art exhibits presented by CARAVAN. “The Bridge” exhibit has shown in a variety of locales including Egypt; St. Martin-in-the-Fields on Trafalgar Square in London; St. Paul’s Chapel in New York City; and Trinity Episcopal Cathedral in Portland, Oregon. Its global tour ends with the exhibition in Wyoming.

Reda Abdel Rahman, one of Egypt’s premier contemporary artists and co-curator of “The Bridge,” comes from a Muslim background, traveled to Wyoming to help set up the exhibit. He looked forward to the people of Wyoming seeing and experiencing the art.

“For some people, it’s their first time to see art from the Middle East,” said Rahman. “It is helpful to make the bridge, to see that we are the same. We have to look at others like we are looking in the mirror. This art helps us to see the other in ourselves, to put aside politics and embrace one another.”

The possibility and promise of art is what drives Chandler and his ministry with CARAVAN.

“I’m always surprised at how similar we all are. At the end of the day, we all change by experiences we have,” he said. “What we’re committed to doing is providing a new experience of the other. It might be one step in the journey toward a world-view change. It’s a journey for all of us, and our role is to facilitate the journey.”