Episcopal Migration Ministries sponsored “One United People: A Dialogue on Refugee Resettlement and Faithful Welcome,” in advance of two high-level summits scheduled next week to address the large movements of refugees and migrants. Photo: Lynette Wilson

[Episcopal News Service] Of the 21.3 million refugees in the world today, 1 percent might be resettled. It’s a lottery with dismal odds.

In 2017, the United Nations High Commissioner for Refugees estimates that 1.19 million refugees will need to be resettled. Next week, during a historic summit of heads of state and government, countries will be asked to take in these refugees. 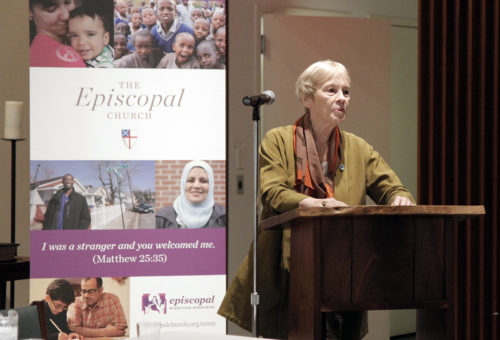 AbuZayd, who serves as an advisor to the U.N. secretary general on next week’s summit, spoke to the more than 60 people – U.N. officials, refugee resettlement professionals, former refugees and supporters and advocates – who gathered Sept. 14 at the Episcopal Church Center in New York for “One United People: A Dialogue on Refugee Resettlement and Faithful Welcome,” a panel event sponsored by Episcopal Migration Ministries. The event was webcast and later will be available online here.

One United People preceded two United Nations events scheduled for next week. On Monday, Sept. 19, the U.N. General Assembly will host the first-ever meeting of heads of state and government to address the large movements of refugees and migrants, aimed at unifying countries behind a more human and coordinated approach.

Then, on Tuesday, Sept. 20, President Barack Obama will host the Leaders’ Summit on Refugees, alongside co-hosts Canada, Ethiopia, Germany, Jordan, Mexico and Sweden. The leaders’ summit will appeal to governments to pledge increased commitments to resettle refugees.

“Resettlement does not end when the refugee arrives in a new country. In many ways this is just the starting point,” said AbuZayd.

It’s the faith communities, she said, especially in the United States, that carry out resettlement work. 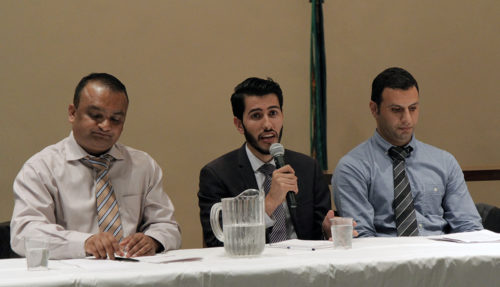 During the seven-member panel discussion, resettlement professionals, refugee advocates and supporters, and former refugees shared their personal and professional experiences. One thing the former refugees want people to understand is that no one leaves home without a good reason.

“No one wants to leave home. The only reason people leave home is because home is on fire,” said Abdul Saboor, a former refugee from Afghanistan who now lives in Syracuse, New York, where he’s a college student and works for InterFaith Works Center for New Americans.

Episcopal Migration Ministries, the church’s refugee resettlement ministry, works with 30 resettlement affiliates in 26 dioceses, providing direct assistance to recent arrivals. It also offers ways for congregations to engage in refugee resettlement in their communities and encourages Episcopalians to join the Episcopal Public Policy Network and advocate for policies that protect the rights of refugees and asylum seekers.

The number of refugees doesn’t tell the whole story, however. Worldwide, war and persecution have forced a total of 65.3 million people from their homes, four times more than a decade ago and the largest number of people displaced since World War II.

The summit comes not only at a time of record numbers of refugees, but also at a time of increased discrimination and violence against immigrants and migrants. The refugee crisis has fueled nationalist movements across Europe, where fear of terrorism and xenophobia have gripped societies and have led governments to take restrictive measures. The same is true in part of the United States where states have introduced legislation either to ban refugees from their states or to weaken the U.S. government’s resettlement program. 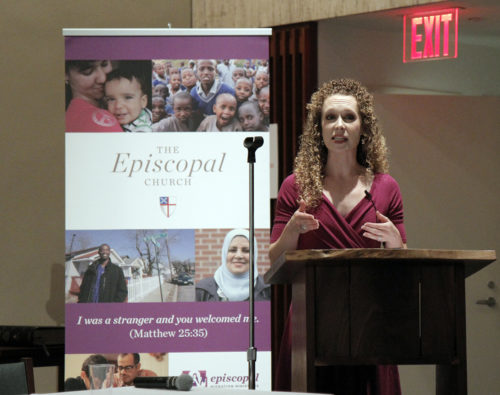 “We’re gathering here today … in advance of and support of the spirit and goals of the summit. In the face of this ‘crisis of solidarity,’ the Episcopal Church stands, active and ready, to respond to this crisis of our time,” Allison Duvall, said EMM’s manager for church relations and engagement. “We stand in solidarity with the aims of the summit, nations of the world hosting refugees, those enacting or expanding their resettlement programs, with communities that welcome their new neighbors through resettlement, and, most importantly, we stand in solidarity with refugees themselves.”

On average, a refugee spends a quarter century in a refugee camp before resettlement; UNHCR is responsible for 16.1 million refugees, the majority of them are living in Africa and the Middle East. (The other 5.1 million are Palestinian refugees registered by the United Nations Relief and Works Agency).

The Episcopal Church plans to hold U.N. member states accountable to their commitments, and to advocate for increases in country’s commitments to resettle refugees, said Lacy Broemel, the church’s refugee and immigration policy analyst.

An observer delegation representing Presiding Bishop Michael Curry will attend the Sept. 19 summit, where member states are expected to adopt a comprehensive framework and protocols for safe, orderly and regular migration in advance of the leaders’ appeal to countries to increase the number of refugees they resettle.

Whereas Episcopal Migration Ministries works with affiliates in communities across the United States, the Episcopal Church and Episcopalians advocate for refugees at the national level through the work of its Washington, D.C.-based office of government relations, and the Episcopal Public Policy Network.

“In the U.S., Episcopalians advocate to Congress and the [president’s] administration to urge robust funding for refugees to thrive in their new communities and advocate for just and humane policies to welcome refugees and migrants,” said Broemel, who works in Washington, D.C. “We work to educate our neighbors and friends about the conditions refugees face, and highlight the moral imperative for refugees to come to the U.S.”

The Episcopal Church has worked to resettle refugees in the United States since the 1930s. Episcopal Migration Ministries is one of nine agencies working in partnership with the State Department to welcome and resettle refugees; this year 85,000 refugees, or new Americans, are expected to arrive.

The Episcopal Church’s work and support for programs that serve refugees extend beyond U.S. borders.

In the Episcopal-Anglican Diocese of El Salvador, Cristosal is leading the effort in Central America’s Northern Triangle to provide emergency protection and legal representation to victims of forced displacement and to facilitate regional resettlement. The Convocation of Episcopal Churches in Europe is involved in several ministries and partnerships to support refugees. At St. Paul’s Within the Walls Episcopal Church in Rome, Italy, the Joel Nafuma Refugee Center provides meals, job and language training, and community gathering space for refugees, many of whom come from Africa and the Middle East. In France, the Episcopal Church has since 2007 worked to resettle, provide services to and help to integrate Iraqi refugees, and also now assists Syrian refugees, through L’Association d’entraide aux minorités d’Orient.