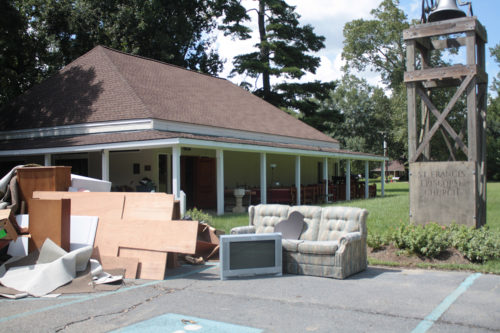 St. Francis Episcopal Church in Denham Springs, Louisiana, just east of Baton Rouge was flooded with 2- to-3 feet of water. Now gutted, church leadership is waiting on government officials to decide whether the buildings will need to be elevated before rebuilding. Photo: Karen Mackey/Diocese of Louisiana

[Episcopal News Service – Denham Springs, Louisiana] If the “Great Flood” of 2016 were a play, the Rev. Mark Holland says, this would be the end of the first act.

Waters are, for the most part, receding in south Louisiana, leaving behind more than 60,000 damaged homes, 100,000 soaked vehicles, and damages estimated at more than $8.7 billion. Homes, businesses and churches are gutted or well on their way to being gutted. Where they can, people are getting back to work and school.

“Where they can” being operative words. Many people are in a holding pattern, waiting on insurance checks, construction permits, contractors’ availability and clarification on new governmental regulations. St. Francis Episcopal Church in Denham Springs, just east of the state capitol of Baton Rouge, took on between 2-and 3-feet of Amite River water.

The church is waiting on the construction permit, said Holland, the church’s new priest-in-charge.

“We have to find out from Livingston Parish – if you took on a certain amount of water, you have to elevate your buildings,” Holland said. “That’s a game changer.”

Decisions on elevation requirements will be made in the next couple of weeks, Holland said, at which point St. Francis will work with its insurance company to decide how best to rebuild the church’s four buildings. Unlike most home- and business-owners in Livingston Parish, the church did have flood insurance. St. Francis is insured by The Church Insurance Companies, which provide churches, dioceses, and institutions with multiple coverages for protecting their people and property, including risk management tools and strategies.

The Rev. Jacqueline King of First United Methodist Church in Denham Springs opened her church to worshipers from St. Francis and to a Baptist church that flooded. King’s invitation came as welcome news to St. Francis’ parishioners.

“We know where we’re going to be, and we can worship together,” Holland said. 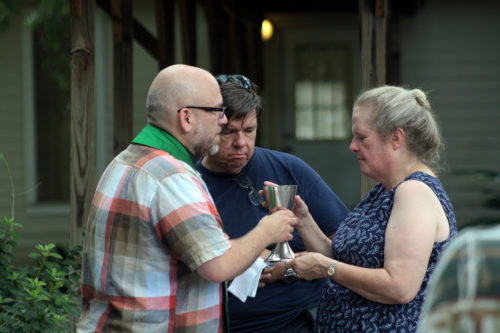 Holland canceled one service at St. Francis the weekend of the flood. The next Sunday, after spreading the word through the church’s Facebook page, about 60 of the church’s 150 or so parishioners gathered in the parking lot. The Rev. Tommy Dillon II, priest-in-charge at St. Margaret’s in Baton Rouge, assisted at the service.

“The congregation met outside on folding chairs under the big oak trees while they celebrated the sacrament, listened to God’s Word, prayed and shared personal testimonies about what happened to their homes,” he said.

The service was cathartic, and Holland invited families to share their personal stories about what happened during the flood, he said.

The church, he said, is responsible for holding the community together, for providing a safe space to talk about issues and concerns. It’s also offering its resources: mainly financial for now, but listening ears later.

“That’s the second act,” he said – tending to people’s mental health as the enormity of the disaster sets in. 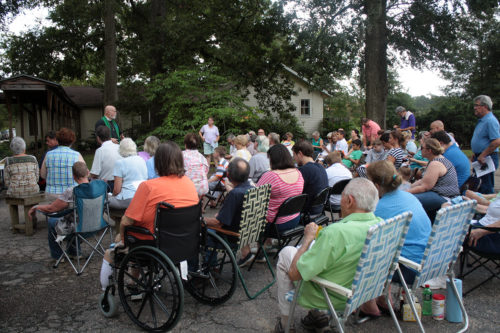 Louisiana Bishop Morris K. Thompson said caring for mental health will be a big part of the church’s mission as recovery moves forward and as people go through the stages of grief.

“We will continue to hold the hands of people who have been affected and walk them through that,” he said.

St. Francis is also planning for what the church will look like in the future. The buildings that flooded were built in the 1950s and bring with them their own set of problems, like the asbestos tiles that popped under strain from the water.

“The church that was there in the ’50s might not be the church for the 21st century,” Holland said, adding that the flood is also going to change Denham Springs. He predicts an exodus of residents, similar to what happened in New Orleans after Hurricane Katrina.

“Denham Springs is going to be a very different place,” he said, pointing out that if “your home flooded, your business flooded and your kids’ school flooded,” families may have to relocate elsewhere.

It took close to a month after the flood for Holland to be able to enter the building and retrieve a contact list of parishioners from his computer.

“We are going to go forward,” he said. “There’s no timeline yet. So much hinges on whether or not we have to raise those buildings up. It’s going to be a long process.”