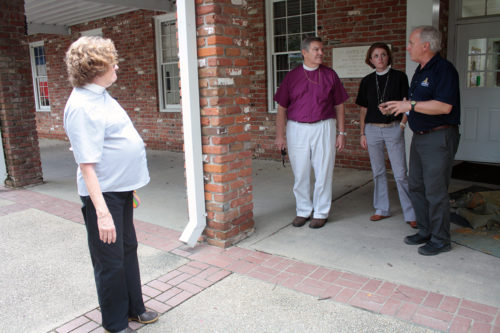 Louisiana Bishop Morris K. Thompson, the Rev. Canon Shannon Manning, canon to the ordinary in the Diocese of Louisiana, and the Rev. Elaine Clements, a deacon and the diocese’s disaster and preparedness coordinator, visited St. Francis in Denham Springs following the flood. Photo: Karen Mackey/Diocese of Louisiana

[Episcopal News Service] A month after heavy rains caused disastrous flooding in south Louisiana volunteers are still working to clean up the damage that left 140,000 homes uninhabitable, but the good news is that the recovery is moving forward.

“The Episcopal Diocese of Louisiana has entered the long-term recovery phase much quicker after this flood than we have after other disasters,” said the Rev. Elaine Clements, a deacon and the diocese’s disaster and preparedness coordinator. “We are engaged with Episcopal Relief & Development to formulate a long-term response. The clergy of the diocese are determining the needs and appropriate projects in the communities served by their (congregations).”

“Over the last month, local churches throughout the dioceses of Louisiana and Western Louisiana have been responding to immediate needs, but this work has only just begun. The long-term recovery is going to take years,” said Katie Mears, director of Episcopal Relief & Development’s U.S. Disaster Program. “Needs now will pivot from shelters, distribution of goods and emergency meals to longer-term solutions like helping people find temporary housing, apply for insurance and other benefits and begin to repair their homes.”

The Diocese of Louisiana is leading a gutting-and-rebuilding program that will utilize volunteers, she said. “Churches across the affected area will continue to use their local volunteers, connections and facilities to reach out to their most vulnerable neighbors and accompany them through the recovery process.”

“We are all aware that this process will be a long one and we realize that there will be additional efforts in the future,” said the Rev. Lois Maberry, a deacon and the Diocese of Western Louisiana’s disaster and preparedness coordinator. “The cooperative efforts with the Diocese of Louisiana and the Episcopal Relief & Development have been essential in this recovery happening.”

All 99 U.S.-based dioceses of the Episcopal Church are engaged in some way with preparedness work through Episcopal Relief & Development’s U.S. Disaster Program, making response times faster. The August floods in Louisiana were the largest natural disaster in the United States since Superstorm Sandy hit the Northeast in late October 2012.

The 2016 flooding also hit Lafayette and the area immediately west, affecting five parishes. Members of the community immediately began “mucking out” houses and clearing debris. Within three to five days, the churches in and around Lafayette began distributing cleaning supplies, water, diapers and food for people impacted by the storm, said Maberry.

“The generosity of people always impresses me,” said Louisiana Bishop Morris K. Thompson, whose diocese covers some of the hardest-hit areas. “People stopping their daily life to go help someone else. It should not amaze me, but it does. Just the goodness of people.”

In Baton Rouge, the damage was worse. When more than 2 feet of rain from a no-name tropical system inundated parts of south Louisiana Aug.12-14, covering thousands of people’s homes, cars, and lives with fetid brown water from backed-up bayous and rivers, the diocese responded immediately.

“I’m thrilled at how quickly we were up and running in our response efforts,” said the Rev. Elaine Clements, a deacon and the diocese’s disaster and preparedness coordinator. “The parishes have been amazing, responding to their communities in ways that are consistent with their gifts and to meet the needs they see locally.”

Despite criticism of the national media for its lack of storm coverage, donations and relief came from across the Episcopal Church and the country.

Unlike Sandy, though, and Katrina, this storm didn’t have a name. And that, Thompson says, may have made it hard to catch anyone’s attention.

“If you think about it, a storm didn’t hit us,” he said. “It was rain and rain and rain. It just didn’t register with people.”

The Rev. Tommy Dillon II agreed. “The presidential campaign and the Olympics were the main things on television.

“The flood seemed like it was on page four for the first few days and then finally people took notice after the pictures and stories began to get it. When [they realized] that it was the largest storm since Hurricane Sandy, people opened their eyes.”

Dillon, a Baton Rouge native who’s back in his hometown after 10 years on the West Coast, first realized what south Louisiana was in for as he drove home from Houston on Friday, Aug. 12. He stopped in Lafayette, about an hour away, to seek shelter from the heavy rain. When the new priest-in-charge at St. Margaret’s in Baton Rouge arrived the next day, he spotted a high-water sign near his apartment.

By Sunday, his phone was ringing.

“Sunday morning, I got a call from my cousin and her partner and they asked if they could come to my house will all of their animals because the water was about to come in their house. All of my sisters and other relatives called me to say all of them had to evacuate,” he said. “I ended up picking up my sister after she escaped by boat from her house. When I picked her up, she broke down in tears due to the trauma she had just experienced.”

In St. Francisville, north of Baton Rouge, the Rev. Roman D. Roldan, rector of Grace Church, first stepped into flood relief work Saturday, Aug. 13, by setting up rainy day activities at the church to help kids and parents suffering from cabin fever. The next day, his attention turned to more serious needs, setting up the church as a distribution center for donations. Then, the former social worker headed to Celtic Media Centre.

A massive Baton Rouge movie studio, Celtic opened its air-conditioned sound stages as shelters for thousands of people displaced by the flooding. After church on Sunday, Aug. 14, Roldan and his family loaded up and headed for the studio. He worked there for much of the next week as a priest, social worker and Spanish translator.

“Many of the folks … were undocumented workers and guest workers. Many of them lost everything they had and were scared. Many of them did not know how to maneuver the fairly complex social services system in Louisiana,” Roldan said. “I was just one of several translators who volunteered at the center. Our job was to translate but, most importantly, to reassure, to help make sense of things, to listen, to empathize, and to find answers from authorities and then pass the information to them. This was exhausting, but rewarding work.”

Dillon tended to his family and helped out in shelters. He put his empty moving boxes to work, taking them to a family with a flooded home so they could save at least some of their possessions. He also visited families who attend St. Margaret’s, though he didn’t officially start there until Sept. 1.

“When we talk about the mission of the church, it is to help the downtrodden and to be the hands of Christ in the world. This is where faith is put into practice,” Dillon said. “The church is a community for those who have lost their homes … to have a place to go to receive prayers and support from others and to offer prayers and healing for the road ahead for recovery.”

Most of the churches in the Diocese of Louisiana escaped damage. St. Patrick’s in Zachary, just north of Baton Rouge, incurred damage to its subfloor. The Episcopal school in Baton Rouge took on water in a couple of its buildings.

The worst damage by far was at St. Francis in Denham Springs, east of Baton Rouge, where the Amite River jumped its banks and submerged most of the town. Several feet of water came into the church, Thompson said.

“As south Louisianans pick up the pieces of their lives, it’s critical that the help continue. People here already have a deep faith in God, and that’s already helping them deal with the immensity of the disaster and the recovery,” said Thompson. “Many people in the flooded area — up to an estimated two-thirds — didn’t have flood insurance. And federal aid, which isn’t designed to make people whole, will take some time in arriving and, when it does, will only go so far.”

“While the water has gone away,” he said, the disruption in people’s life continues. “The church needs to be prepared to handle that kind of anxiety and the weariness that people will experience.”

Still, he said, “south Louisiana is full of resilient people who will recover.”