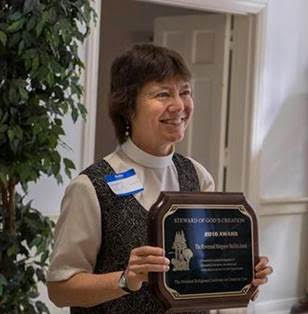 [Episcopal Diocese of Western Massachusetts] Faith leaders gathered in Washington, D.C., Sept. 12 for the Annual Prayer Breakfast hosted by the National Religious Coalition on Creation Care (NRCCC) at which the Rev. Margaret Bullitt-Jonas was presented with the “Steward of God’s Creation Award.”

The award is given annually to a faith leader whose ministry is moving the needle toward climate justice and inspiring reverence for the earth. “I am touched and humbled to have been given this award,” Bullitt-Jonas said.  “And I am grateful beyond words for all the people alongside me who are taking part in the great struggle to protect God’s creation and to leave a habitable world to our children and grandchildren.”

The event took place at Capitol Hill Lutheran Church with more then 20 speakers reflecting on this year’s theme: “Focus on Public Lands and Religious Responsibility.”

Bullitt-Jonas serves as missioner for creation care for the Episcopal Diocese of Western Massachusetts and the Massachusetts Conference United Church of Christ. Her work is to make sure the voice of the faithful can be heard in public discourse related to climate change and to inspire individual congregations to see climate justice as a significant issue – one that requires human intervention and spiritual resolve. She has written prolifically about issues related to climate justice and participated in advocacy at the national level and civil disobedience. Bullitt-Jonas is a preacher, teacher and activist who annually rallies 55+ Episcopal congregations to observe “Creation Season” from the Feast of Saint Francis (Oct. 4) until Christ the King Sunday (Nov. 20). She is the diocese’s first dedicated missioner for creation care, appointed by Bishop Doug Fisher in 2013. For more information about her ministry visit: www.revivingcreation.org.