[Episcopal News Service] How to conduct one-on-one conversations, how to run a meeting, how to listen and understand self-interest are just some of the skills learned by seminarians and others who train for community organizing.

In 2013, Church Divinity School of the Pacific began offering a weeklong course, “Organizing for Public Ministry,” in partnership with the Industrial Areas Foundation. IAF is a well-established network of faith and community-based organizations that trains leaders and empowers communities.

“The IAF training got my feet on the ground and into the community from the moment I arrived into a new, mission-focused role, in a place unfamiliar to me,” said the Rev. Twila Smith, who serves as priest-in-charge of Grace Episcopal Church and as a missioner at Church of the Mediator, both in Allentown, Pennsylvania. “I knew how to build collaborative relationships in the community and began ‘one-on-ones’ with neighbors and potential partners the first week.” 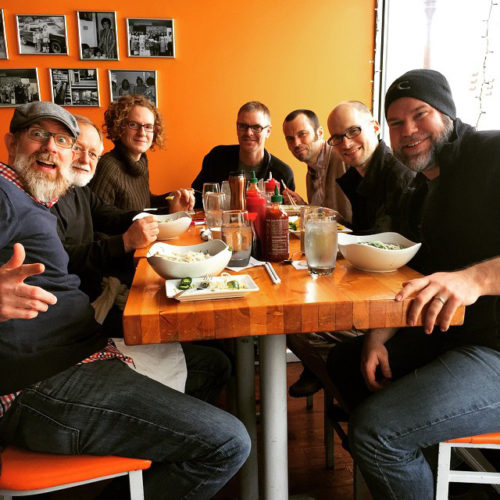 Aaron Klinefelter (foreground right) with a group of pastors and leaders he used to co-facilitate in the Diocese of Southern Ohio before he and his family moved to Berkeley for him to attend CDSP. Photo: Aaron Kleinfelter

CDSP, the Episcopal seminary in Berkeley, California, initially offered the weeklong training as an elective. Beginning with the fall 2016 semester, it’s a requirement.

The training isn’t intended to provide participants an opportunity for personal transformation, although it often does change the way they view societal structures.

“The real change is lived out after the training – that’s really where the rubber hits the road,” said Anna Eng, a Bay Area IAF lead organizer. “We don’t organize these trainings so that people can have an experience. We really challenge people to think about how this is going to impact the way that they operate in their ministry back home.”

What encourages her, Eng said, is when she meets people six months or a year later and “they are still mulling what they learned, or they are practicing individual meetings. They’re engaging differently with public officials. That’s where the change actually happens. Certainly, people have ‘aha moments’ and get agitated and think differently – that’s very, very common – but I’m more interested in knowing what they do with it.”

Anne Clarke, a 2015 graduate of CDSP, took the course in 2013. She uses what she learned during the course in her job as lifelong Christian formation coordinator, a new position in Diocese of Northern California.

“I have spent a lot of time one-on-one connecting with others and bringing people with similar concerns together,” she said in a telephone interview with Episcopal News Service. “I cannot provide programming for everyone, but I can provide a deeper sense of connectedness.”

When Clarke moved to Sacramento she sought out local IAF organizers, people she could talk to about challenges such as the time it takes to build relationships, to get to know others, to establish trust. The training, she said, has helped her to communicate better and to form a framework for moving from one-on-one conversations to bringing groups together to accomplish things people cannot accomplish alone.

The IAF broad-based community organizing training that seminarians receive is not issue-oriented. It focuses on building relationships and determining common concerns. It’s a long process, and it doesn’t hinge on an individual. Jennifer Snow, CDSP’s director of extended learning and an assistant professor of practical theology, says that cannot be emphasized enough. 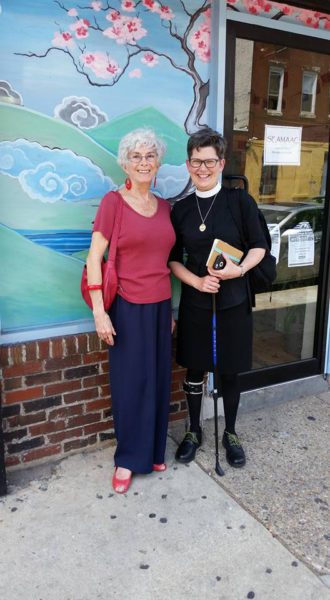 One of the pre-course readings assigned to seminarians is an unpublished paper written by a Presbyterian pastor who for seven years worked with a congregation in Michigan. She led her congregation to become an IAF member and to become active the community, but when she left, she discovered that the work had no roots without her.

“In fact, people didn’t like it. They didn’t understand it. They were eager to get out of it,” said Snow, adding the pastor hadn’t done the groundwork to get congregation invested in the work, which is something Snow wants the seminarians to understand at the outset.

“I want them to be thinking from day one – you know you as the leader can say, ‘yeah, we’re going to do this,’ because you might have the power and the influence in the congregation,” she said. “But how are you going to get the entire congregation to understand what you are doing and invest in it beyond your personal charisma or personal position of power?”

IAF  designed the training for people who are becoming active in community institutions; it’s not specifically for congregations, though a lot of IAF member institutions are congregations. The language is not theological, and it doesn’t address the dynamics of congregations or their resistance to community organizing.

From after-school tutoring programs to homeless shelters, food pantries, soup kitchens and community gardens, Episcopal churches nationwide provide services in their communities. Still, most of these ministries exist within parish walls. To prepare future leaders for ministry beyond the parish walls is a priority for CDSP.

“Leaders in ministry have a public role and that it’s part of our job to help our students to know how to handle that,” said the Rev. Susanna Singer, an associate professor of ministry development and the director for CDSP’s Doctor of Ministry program. “How does a religious leader handle public conversation and leadership in the public sphere without crossing lines inappropriately, but also without selling the church down the river and refusing to do that thing that we’re perfectly within our rights to do legally and we’re absolutely called to do by God?”

Through the development of its new curriculum, faculty members considered public discourse, action and collaboration, along with contextual awareness and critical reflection, the latter which is something IAF does well, she added.

In the two congregations Smith serves, she said the IAF approach, as well as her Asset-Based Community Development training, helps.

“To understand values and power, and to learn the interests of the parishes,” she said. “Holding that alongside our Baptismal Covenant. We’re having hard conversations about how we live as we say we believe. Enacting our faith calls upon us, I believe, to look inside the church at how we use power, too. And the IAF training helped me not only see that but to see avenues for change.”

One of the challenges Smith faces is that the majority of the people in church on Sunday mornings do not live and work in the church neighborhood.

“The IAF training helps in examining not only who but where we are called to be the church,” said Smith. “The IAF training emphasizes an active voice – and mobilized bodies – for living the gospel.”