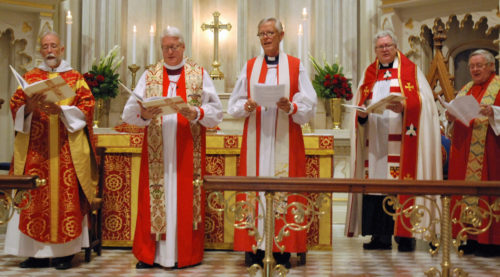 Clergy gather before the altar for the investiture of Bishop Skip Adams, left, on Sept. 10. With him are (left to right) Bishop Dean E. Wolfe, vice president of the House of Bishops and bishop of the Episcopal Diocese of Kansas; Bishop Charles G. vonRosenberg, the outgoing provisional bishop of the diocese; the Very Rev. Michael Wright, dean of Grace Church Cathedral; and Bishop J. Michael Garrison, retired 10th bishop of the Diocese of Western New York. Photo: The Episcopal Church in South Carolina

“We are going to continue to look out, and to look beyond, and to trust whatever the future holds, because we know that future is held by God,” Adams told Episcopalians from across eastern South Carolina who gathered at Grace Church Cathedral in Charleston.Adams is the successor to Bishop Charles G. vonRosenberg, who led the diocese for 3-1/2 years as Provisional Bishop, guiding it through a period of reorganization after a group of churches and individuals announced they were breaking away from the Church in 2012.

Adams is the successor to Bishop Charles G. vonRosenberg, who led the diocese for 3.5 years as provisional bishop, guiding it through a period of reorganization after a group of churches and individuals announced they were breaking away from the church in 2012.

Adams officially retires in October after serving 15 years as the 10th bishop of Central New York. Meanwhile, he has taken up residence in Charleston and begun his new duties as provisional bishop. He and his wife, Bonnie, were welcomed by more than 200 people at a reception the evening of Sept. 9 at Church of the Holy Communion in Charleston. (View photos of the reception)

Following the usual procedure for provisional bishops, Adams was the only nominee put forward at the special convention of the diocese on Sept. 10, which was called to order by VonRosenberg. (View a photo album of the Special Convention and liturgy)

The Rev. Jean McGraw, president of the Standing Committee, said Adams was the unanimous choice of the committee, who she said “saw Bishop Adams as a spiritual leader, a man of prayer, and open to the Holy Spirit. He exuded a peaceful, calm demeanor, and much inner strength.”

The election was followed by a festive celebration of Holy Eucharist and an investiture liturgy. (Video of the service is here.)

Preaching and presiding at the service was the Rt. Rev. Dean E. Wolfe, bishop of the Episcopal Diocese of Kansas. As vice president of the House of Bishops, he led the investiture on behalf of Presiding Bishop Michael Curry. He also brought words of encouragement for the reorganized diocese, which now includes 31 congregations and some 7,000 members.

“You know, you all are my heroes. You’re the people who get up early and stay up late to be The Episcopal Church in South Carolina,” Wolfe said in his sermon (text and video here).

“This is a place where your deep faith has been challenged and your strongest loyalties have been questioned,” Wolfe said.  “…You picked up your cross and followed Christ.”
Later in the service, Adams was formally seated in the cathedral by Dean Michael Wright. He then offered a tribute to VonRosenberg and his wife Annie.

“I am very clear that I could not be here celebrating with all of you without huge amounts of work being done… we wouldn’t be here without them,” Adams said.

He also thanked the people of the diocese for the welcome that he and Bonnie have received.  “There is nothing greater than experiencing the love of God through God’s people,” he said.

“Anywhere that I have ever served in my 36 years of ordained ministry, Bonnie and I have fallen in love and we have been loved. And we look forward to falling in love with you.”

“I know that’s not a perfect science – it’s not always clear where the puck is going,” Adams said. “But I trust the Holy Spirit to lead us to where that puck is going… and that’s where we will go.”