Two years ago the seminary began an overhaul of its curriculum, refocusing its Master of Divinity program on three core Christian concepts: mission, discipleship and evangelism. Along with that, it committed to educating seminarians in the skills of critical reflection, contextual analysis and public conversation, for which training them in community organizing plays a role. 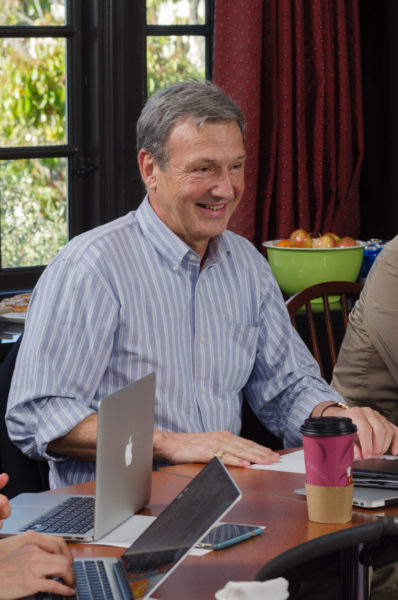 “We were trying to make a shift in our curriculum and were looking for a tighter fit between the life of faith and public life,” said the Very Rev. W. Mark Richardson, the president and dean of CDSP, in an interview in his office with Episcopal News Service.

“To develop confident leaders at the interface of faith and public life … that’s a 21st-century way, we think, of approaching the question of mission,” he added.

For many Episcopalians, it’s clear that to be the church in the world means to be present in the communities and to take an active interest in improving people’s lives. In recent years, some Episcopal bishops increasingly have called for their clergy not only to be pastors but to be entrepreneurs, public theologians and faith-based community organizers.

“Bishops were saying increasingly that community organizing is a good thing,” said the Rev. Susanna Singer, an associate professor of ministry development and the director for CDSP’s Doctor of Ministry program. “We’ve always had our seminarians do clinical pastoral education in hospitals to learn the in-depth pastoral skills, but some bishops started to say that we want them to learn in-depth organizing skills.”

The Christian faith, she added, is all about God’s vision of flourishing for humanity and the cosmos. “It means that the body of Christ, which is us now, has got to get out there now and be involved in the communities in which we live because that’s where God’s dream is going to come true.”

To train its seminarians, CDSP turned for help to the Industrial Areas Foundation, a network of faith and community-based organizations that has trained leaders and empowered communities since 1940.

In 2013, the seminary and IAF began offering the weeklong Organizing for Public Ministry course based on the national IAF leadership training in the religious, educational, labor and community context. Previously a six-day elective, beginning this fall it’s a requirement for incoming seminarians.

“The intention is to train ordinary people both in giving them a conceptual framework for thinking about issues of power and self-interest and leadership as well as some of the practical skills of engaging people who are different than you out in the broader world,” said Anna Eng, lead organizer for the Bay Area Industrial Areas Foundation, in a telephone interview with ENS.

Participants learn, she added, how to lead a meeting and have productive conversations. Many IAF leaders come from a religious context, so partnering with the seminary, which in addition to the practical training, facilities a theological discussion, makes sense.

CDSP not only offers the course, it’s also an IAF member.

The course focuses on developing skills, tools, and theoretical and reflective capacities for community organizing around multiple issues in the context of ministry. IAF leaders provide the practical nuts-and-bolts training and CDSP faculty lead theological reflections. 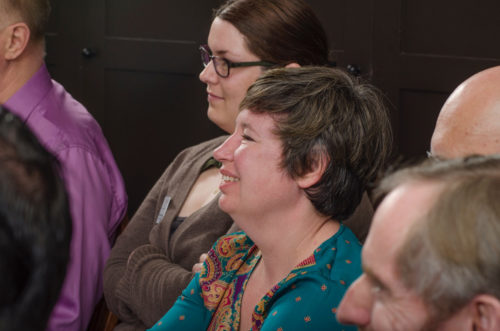 Jennifer Snow, CDSP’s director of extended learning and an assistant professor of practical theology, facilitated the theological reflections during the latest IAF training. Seminarians participate in a daily theological reflection. They write papers preceding and following the training and are required to read assigned articles and books, including Jeffrey Stout’s “Blessed Are the Organized: Grassroots Democracy in America.”

“Community organizing is a strategy for working for justice,” she said, students making the distinction is a desired outcome of the course. “They should be able to realize and articulate why this as a strategy has a biblical and theological mandate for faith communities, not that it’s the same thing.”

It’s an important distinction to make: Community organizing is a specific strategy that emerges from a specific context and specific needs, said Snow.

“If you go into it thinking, ‘I have to work for justice because the Book of Micah tells me so, and Jesus tells me so, and, therefore, I have to do community organizing,’ that’s in the end not very convincing,” she said. “Because community organizing is a specific strategy not only about working for justice but about approaching power in a relational way as opposed to a ‘power over’ way.”

As it turns out, changing people’s perception of power is critical.

“It involves thinking differently about power: building relationships with people, inviting people in to share the power with you as a leader. It’s a very specific strategy about trying to reach a more just society in our particular context,” Snow said.

Understanding and embracing power as a positive force initially can be an unsettling process.

“Most of us have a negative connotation with power because we’ve been on the losing end of it and we’ve seen it abused,” said Eng, adding that power is not an innately bad thing.

“Part of it is helping people reclaim that, the notion of the power that raised Christ from the dead is within you: Reclaim that, own that and not be scared by that. But we’ve seen a lot of misuse of power, and we’ve experienced it, so it makes sense that people shy away from it.” 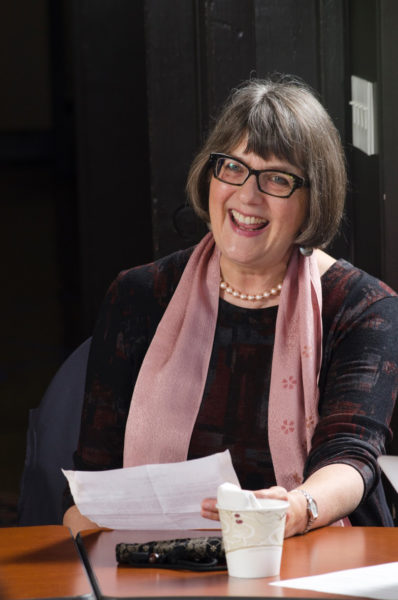 The Rev. Susanna Singer, an associate professor of ministry development and the director for CDSP’s Doctor of Ministry program, helped to reshape the Master of Divinity curriculum to include community organizing training. Photo: CDSP

“On the very first day, we were challenged to see how often we – especially women – give our power away the minute we open our mouths,” she wrote in an email to ENS. “I was encouraged to claim my power and speak without apologizing. This was an important lesson for me as a future leader. I learned how to build one-on-one relationships by listening deeply, allowing my curiosity to lead and asking the right questions.”

“I have become bolder and more open,” said Thomas, who lives in Santa Barbara and who takes online courses and spends four weeks on campus annually.

Founded in 1893 to train clergy for ministry in the West, CDSP is a founding member of the Graduate Theological Union. It is one of seven seminaries in northeast Berkeley just blocks from the University of California campus, with Jewish, Hindu, Muslim, Orthodox, Swedenborgian and evangelical centers. GTU member school San Francisco Theological Seminary is in nearby San Anselmo, Marin County.

It’s in this ecumenical, interfaith and secular context that seminarians participate with rabbis, businessmen, students and others in the course.

“The mix of perspectives and opinions was really diverse, so that was really educational, to be in there with someone who has been in business their whole life. A retired CEO has a very different perspective than me,” said Aaron Klinefelter, a seminarian from the Diocese of Southeast Ohio.

Klinefelter, now in his second year, enrolled in seminary knowing that he would have to do more than lead a parish, that he would be expected to participate in public and community life.

“I certainly knew that going into this,” he said during an interview with ENS at Brewed Awakening, a coffee shop down the hill from the seminary, adding that this way of thinking is still somewhat new in the Episcopal Church. “I’m not sure why it’s a new thing that people are realizing that members have left the building.”