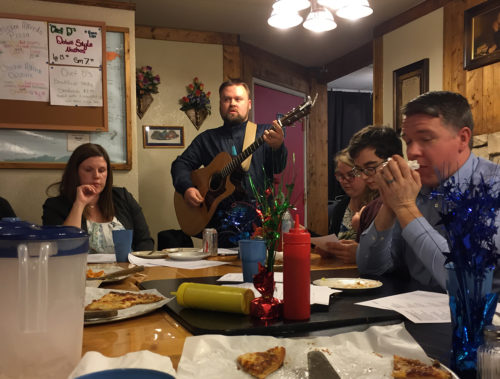 [Episcopal News Service] A few weeks ago at the Iowa State Fair, not far from the corn dogs, carnival games and Ferris wheel, the Rev. Lydia Bucklin baptized her two young children underneath a tree as some passersby joined in and others looked on in wonder. The event was the latest in a series of monthly gatherings of the Breaking Bread Ministry, a group that began in October of 2015 at a bar outside of Des Moines.

Bucklin, the young adult missioner for the Episcopal Diocese of Iowa, started the group with Lizzie Gilman and Zebulun Treloar-Reid after a conversation at a retreat. Gilman had a friend who was starting a brewery, and they all thought it would be a good way to get young adults to “experience the Eucharist out in the world,” as Bucklin described it.

With permission from Iowa Bishop Alan Scarfe, Bucklin began to develop a liturgy for a sacred service in the secular world. Eventually, she developed a portable program, which resembles a regular Eucharistic service with a few exceptions: no a traditional sermon, recitation of the Nicene Creed or confession of sin. Instead, there are two readings from a variety of sources such as poems, meditations or passages from books.

When people arrive for Breaking Bread, each one receives a bulletin with a highlighted portion of the liturgy, which they are to read.  A volunteer sometimes brings a guitar to lead music; other times it is more organic hymn singing.

“There is not much that I do other than presiding over the table,” Bucklin said. “It helps promote the idea that we are all called to do God’s work. We are all a part of it.”

But the most interesting aspect of the service is what Bucklin calls the “powerful question.” Sitting in a circle, as is the preferred arrangement for the service, someone will read a pre-determined question on a general spiritual topic, followed by the practice of intentional listening as people share their personal stories. 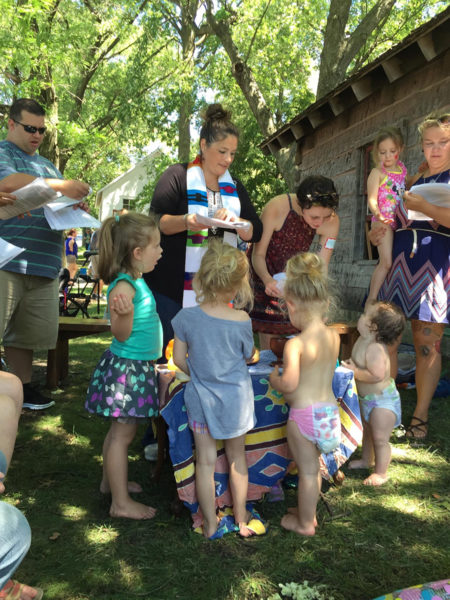 “I still basically follow the Book of Common Prayer,” Bucklin said. “We may not do the Nicene Creed or the confession of sins, but we might have conversations about sin or about the important aspects of our faith and what the non-negotiables are. Or we may talk about what we struggle with.”

Bucklin says that the environment invites people to open up. And there have been some attendees who have discussed depression, substance abuse and arrests.

Since the first meeting nearly a year ago, the group has developed a core following of about six to eight people in addition to another 10-15 that may show up at each unique location and time. In addition to the brewery and the state fair, services have been held in a park, a pizzeria and even in Breaking Bread co-founder Lizzie Gilman’s home.

Gilman is a stay-at-home mother of two young girls and knows all too well how difficult it can sometimes be to get young families to church on a Sunday morning.

“Times have changed where Sunday mornings are not doable for some families and single people. Whether people had sporting events or they had young kids or maybe they just wanted to sleep in – whatever it was – Sunday mornings didn’t seem to be working for young adults,” Gilman explained. “So we were thinking what do people do? Well, they go out after work. It is easy to turn down a Sunday morning, but when someone is offering to feed you dinner and buy you a beer, you might want to try it out.”

For Gilman, bringing the ministry of the church out to the people is the most inspirational aspect of Breaking Bread. “I think it is important that the church sees how wonderful the spirit is when we are meeting beyond the church walls,” she said. “We may be meeting on a different day or a different place, but we are celebrating the same Eucharist. Just to feel that sacredness, wherever you go, is a powerful feeling. It is like going to a great dinner party where you don’t know anybody, and you just trust that the Holy Spirit is going to give you an awesome time.”

“There have been many people who have come that would never enter a church building. Some of them have told us that,” Bucklin said. She described one instance where a groundskeeper for a church admitted he never attended the service inside because he knew he didn’t have enough money to put in the collection plate. When he discovered they were meeting in a park, he attended the service because he felt more comfortable.

Bucklin emphasizes in each service that there is not an expectation of joining or being a member. And since there is little overhead costs to hosting a service, they don’t seek donations. “We don’t need a fancy building or a ton of supplies,” she said. “I carry a simple tote bag with chalice, paten a couple cloths. Other people bring the wine and bread. When we had it at the state fair, we had to use the bottom bun of a pork sandwich.”

That combination of a laid-back environment with an intentional Eucharistic service is what makes Breaking Bread special and allows for unique interactions.

One of Bucklin’s most memorable moments came at an Ash Wednesday service the local pizza place. Gilman invited the kitchen staff and waitstaff to participate, and three people came out with tears in their eyes to take part in the service. After imposing the ashes on a heavily tattooed waitress named Angel, Bucklin’s daughter called out to her mother, saying, “Mommy, I don’t want to be dust.” Without skipping a beat, Angel replied, “But honey, don’t you know that the most beautiful stars are made of dust, just like you and me? You are a bright and shining star.”

“It was one of those moments when you realize this is why we are doing what we are doing,” Bucklin said.

For recent seminary graduate and Breaking Bread co-founder Treloar-Reid, one of the most important aspects of the ministry that it is broader than one congregation. “This is more focused on bringing together people from the metro area rather than one specific congregation,” he said. “This is all about bringing the sacred into secular spaces so that we can start blurring those lines between the sacred and secular.”

Treloar-Reid, a 27-year-old transgender man, also appreciates that the group is open and affirming to the LGBTQ community. As such, Bucklin has made an effort to create a liturgy that is free from gendered language, eliminating references to God with masculine pronouns or as a father, as well as other adjustments.

“I’ve never personally had an issue with using male pronouns for God because I’ve never really thought of God as physically male,” Treloar-Reid said. “But I think it is important to remind people that God isn’t part of the patriarchy. I think if we use male language too much, then we can start glorifying the male person too much, and I think that is dangerous.

“I appreciate having spaces where we talk about God in a broader perspective because ultimately God is genderless.”

Rachael Essing, a 22-year-old Episcopal Service Corps volunteer, agrees. “The words in the liturgy that we use are not binary, nor is it all masculine, which as a young female, I really appreciate.”

“I like tradition, so I like to have some things that I can focus on and know where they come from,” Essing added. “But I also like pulling in new sources because there is a lot of material out there for us and maybe that fits better with someone else. It opens us up to the world where they can connect.”

In its brief existence, the Breaking Bread format is already beginning to spread as neighboring dioceses have started to test out the format.

“It’s a formula that is easy to take and make your own and do it anywhere,” said Bucklin. “The idea was to have it in lots of different places to express that the sacred is all around us. We can find the divine in ordinary things and ordinary people.”

– Luke Blount is a freelance writer based in Durham, North Carolina.