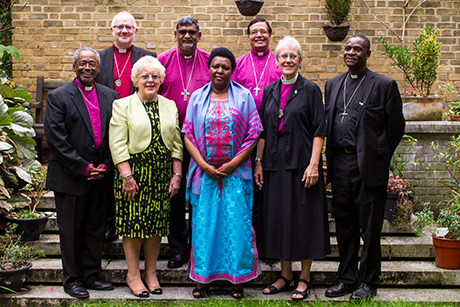 Members of the Archbishop of Canterbury’s task group gather at the Anglican Communion Office in London for their first meeting. Photo: ACNS

[Anglican Communion News Service] The Task Group set up after the Primates’ Gathering and Meeting in January to “maintain conversation” has met for the first time and stressed its determination to work together. But it acknowledged the process would take time and could not be rushed.

The primates asked Archbishop of Canterbury Justin Welby to appoint the group to restore relationships, rebuild mutual trust, heal the legacy of hurt and explore deep differences. Welby presented the group’s mandate to the Anglican Consultative Council’s 16th meeting in Lusaka in April where it was received and affirmed. This week, seven members of the group have been meeting at the Anglican Communion Office in London. An eighth joined in via video conferencing.

“What we are trying to do here is mirror what we desire for the whole Communion,” said the Rt. Rev. Linda Nicholls, coadjutor bishop of Huron in the Anglican Church of Canada. “We are trying to practice in our engagement with each other here what we long for in the wider Communion.”

Archbishop Ian Ernest, from the Province of the Indian Ocean, said exchanges within the group had been frank and open.

“What has come out very clearly is the level of transparency that we have in the group. We have been able to be open and speak openly about our differences,” he said. “We also recognize the richness of the Communion. And we all love our Communion – that is what binds us together.”

Bishop Paul Sarker, moderator of the Church of Bangladesh, echoed the same theme. “Our cultures and backgrounds are very different, and we express our spirituality differently but we are moving forward together,” he said.

“I was coming to London anticipating and hoping we would find ways to genuinely go deeper in our relationship with Jesus Christ. I believe the closer we draw to God in Christ, the closer we are going to draw to each other.”

Asked if he felt there had been progress, Curry said, “Well, we are here and we are doing it!”

He recalled a slave spiritual song from the U.S. “We’ll just keep inching along, like an inchworm. The wisdom [of the song] is that the worm keeps moving forwards, slowly and steadily. Don’t expect things to happen overnight. . . We are committed to the Anglican Church. We believe in the importance of the Communion for the sake of the gospel and the world.”

Reflecting on the diversity, Canon Rosemary Mbogo, provincial secretary of the Anglican Church of Kenya, said there was no grouping within the Anglican Communion whose views would not be listened to.

“That is really needed if we are talking about healing and walking and working together in a unified Communion,” she said, adding that she had been pleased at the progress made. “It’s gone well. We have covered a lot of ground on understanding each other and the people we represent. We have been coming to know each other by spending time together. There is definitely hope – I am convinced of that.”

Ernest agreed: “It has gone beyond my expectations,” he said.

Bishop Josiah Idowu-Fearon, Anglican Communion secretary general, said he was grateful to the participants for the sacrifices they had made to attend the meeting. He welcomed the progress made in the talks.

“I am really encouraged by the depth of trust that is beginning to be seen and also the hope expressed by the participants,” he said.

The group stressed the importance of prayer in the work they were doing.

“We have committed to pray for each other,” said Archbishop Philip Freier of the Anglican Church of Australia. “There may be a sense that this is just a ‘talk-fest.’ But this [prayer] is a profound action consistent with the theme.”

Mbogo agreed prayer was the foundation of the group’s work and it was vital to know the will of God for its direction.

Curry added, “Our time here has been immersed in prayer. That is always going to be a formula for a better outcome.”

The Archbishop of Canterbury formally welcomed the group and prayed for them before talks began on Tuesday. He also attended the first session during which he stressed there was no pre-set agenda and that the group was to appoint its own chair.

Idowu-Fearon hosted the group and acted as secretary. The group agreed the post of chair would rotate around the membership. The ninth member of the group, Archbishop Ng Moon Hing from the Province of South East Asia, was unable to attend. The moderator of the Church of South India, Bishop Govada Dyvasirvadam, will not be taking part because of allegations he is facing in India.

The group is scheduled to meet annually with additional meetings electronically. The date of the next meeting is yet to be confirmed.