[Episcopal News Service] The recent protests of an oil pipeline in North Dakota have thrust the Standing Rock Sioux Nation, and many of its members who are Episcopalians, into the national spotlight. But for the several Episcopal congregations on Native American reservations in North Dakota, the focus on energy issues and the environment is nothing new.

On Sept. 6, a U.S. district judge stayed construction on a section of the pipeline crossing North Dakota. Federal regulators previously issued permits allowing the $3.8 billion pipeline to cross four states: North Dakota, South Dakota, Illinois and Iowa. The tribe, joined by protestors from across the nation, says the pipeline threatens to destroy sacred sites and to contaminate drinking water. Over the Labor Day weekend, the situation turned violent as protestors clashed with private security guards hired by Dallas-based Energy Transfer Partners, the corporation developing the pipeline.

Long before protesters in August initially succeeded in halting work on the part of the pipeline that crosses the Missouri River just north of Standing Rock, the Diocese of North Dakota began work on an energy sustainability project in its seven native ministries and congregations. That project got a big boost this year when the United Thank Offering, or UTO, awarded it a $50,000 grant, combined with an additional $45,000 from a sustainability initiative funded through the General Convention budget.

The first step is an audit of the parish buildings on four reservations in North Dakota to identify ways of making them more energy efficient. Then most of the money will fund building upgrades and, at one of the churches, a solar power project.

Church leaders also see the project as a way of expanding their capacity for outreach. If they can make it cost-effective to open churches and parish halls at hours other than Sunday worship services, new ministries can take shape, especially those that cater to young people.

This energy sustainability effort at the congregational level aligns with church members’ opposition to the Dakota Access Pipeline, said the Rev. John Floberg, canon missioner for the Episcopal Church community on the Standing Rock Reservation and an Executive Council member.

The Standing Rock reservation draws its drinking water from the Missouri River, and the tribe is concerned that the pipeline could leak or break and contaminate that water. But fossil fuels, such as the oil carried by the pipeline to refineries and markets around the country, heat and power most of the buildings there.

“If we never see our use of these things as on our shoulders as well, and try to find ways to mitigate that, then shame on us,” Floberg said.

Floberg is pastor of the three Episcopal congregations on the North Dakota side of the Standing Rock Reservation, though he oversees the sustainability project for all of the diocese’s Native American congregations, including those on Turtle Mountain Reservation, Spirit Lake Reservation and Fort Berthold Reservation.

The scope of this project is comprehensive, with all church buildings under review. It is similar to an effort made three years ago at one of the churches, St. James’ Church in Cannon Ball. After a fire had destroyed its former building, the St. James congregation received a UTO grant to include a geothermal heating and cooling system when rebuilding. 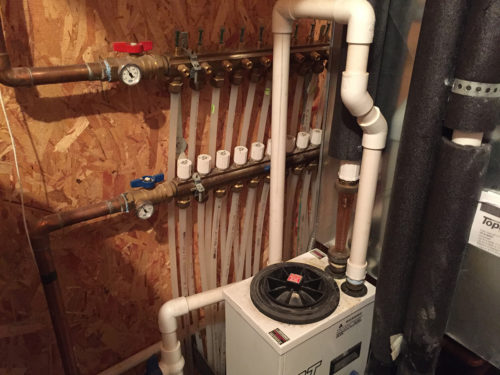 St. James Episcopal Church in Cannon Ball, North Dakota, is heated with a geothermal system that was installed in 2013 when the parish rebuilt after a fire destroyed the old church. Photo: John Floberg

To heat told building for use beyond Sunday mornings and to keep the pipes from freezing cost between $1,500 and $3,000 in the coldest winter months. With the energy-efficient system, the church spends about $250 a month on utilities, Floberg said. The diocese then sought to improve energy use in all church buildings on North Dakota reservations, underscoring the practical challenges congregations face in paying the bills and applied for another UTO grant.

“Without greater efficiency or replacement of higher-costing energy sources, the simple answer for our congregations is to turn down or turn off the heat to their buildings for a week or in some cases for months at a time,” the grant application said.

The purpose for the grant money, then, is not only to catch up on deferred maintenance at the churches but a “long-term reduction in the use of fossil fuel.”

“If you were able to take both energy efficiency (improvements) and utilizing the three renewable energy sources, you would be able to keep more church doors open and have more churches focused on doing the ministry and what congregations are called to do,” said the Rev. Brandon Mauai, an Episcopal deacon on the Standing Rock Sioux Reservation.

Mauai had the opportunity to join an Episcopal Church delegation that traveled to Paris last December for the COP21 climate summit. That experience, he said, allowed him to bring back insight and information that can be applied to the North Dakota diocese’s sustainability efforts, especially in pursuing those three renewable energy sources: solar, wind and water.

The first step is also the least expensive: an energy audit. An expert, likely from a local heating and cooling company, will be asked to come and analyze each building’s structure, utility systems and appliances, and recommend improvements that will make the buildings more energy efficient.

Other buildings may benefit from weather-sealed windows and doors, or better insulation, Floberg said. And the fellowship hall at St. Thomas’ in Fort Totten will likely replace its natural gas furnace that is decades old and only 60 or 65 percent efficient with a more efficient furnace.

St. Paul’s in White Shield worships in a church built in the 1960s, and although building already has upgraded to a high-energy furnace, it will look into adding a heating system in its newer addition that will take advantage of technology advances, such as infrared heating.

The savings from more efficient heating systems are sure to add up over many freezing winters in North Dakota. In January, the average temperature in Bismarck, the state’s capital, is a chilly 13 degrees.

The sustainability project’s most ambitious upgrade will be the addition of solar panels at St. James. The hope is that the combination of solar power and the existing geothermal heating and cooling will allow St. James to reduce its reliance on fossil fuels to the point that it can send money back to the diocese to help pay the other congregations’ expenses.

Floberg also sees it as a visible expression of the Episcopal Church’s mission.

“When we put up this solar panel here, people in this community and on this reservation are going to see it and … it’s going to be a quick connection with what the Episcopal Church might say in its meetings and what it’s doing on the ground,” he said.

That partly reflects the project’s additional goal of improving the communities around the congregations through energy education. Residents can apply the lessons the low-cost energy savings strategies like weather-proofing and caulking learned at the churches to improve the efficiency of their homes.

While attending seminars and networking with conservation experts at the COP21 summit in December, Mauai learned ways to improve the effectiveness of the solar power efforts back home. But “just the smallest things,” like building improvements, can add up, Mauai said. “And it’s making a statement that we are practicing what we preach as a church.”

And when the parish buildings can be kept open anytime during the week without breaking the congregations’ budgets, there will be more opportunities to invite the community in, Floberg said.

Such outreach opportunities could take many forms, but Floberg said an initial focus would be on expanding youth ministries. The parishes already organize a youth camp in the summer, but winter events usually have to be held in borrowed space, such as a public building. That could change once the churches remove or reduce the barrier of heating costs.