[Episcopal News Service – Snohomish, Washington] Take a priest who was a Wisconsin dairy farm boy, instill in him a longing for the fields, place him in one of the most fertile valleys in the Northwest, surround him with Episcopalians and others called to serve their communities, and the yield is more than a million servings of winter squash.

The farmer-priest is the Rev. Jim Eichner, also the rector of the Episcopal Church of the Holy Cross in Redmond, Washington, a wealthy nexus for technology companies, including Microsoft. The farm is the Food Bank Farm, sponsored by Holy Cross. Food Lifeline, based in nearby Seattle, is the recipient and distributes the produce to its 275 members that run feeding programs.

Eichner and the parish began the farm in 2011 with 12 volunteers, on land in the Snohomish River Valley at Chinook Farms. The 132-acre community-supported swath of land on which niche farmers lease growing ground is owned by Eric Fritch, senior warden at St. John’s Episcopal Church in Snohomish. Eichner and the volunteers took out 3,750 pounds of food from their plot that first year. 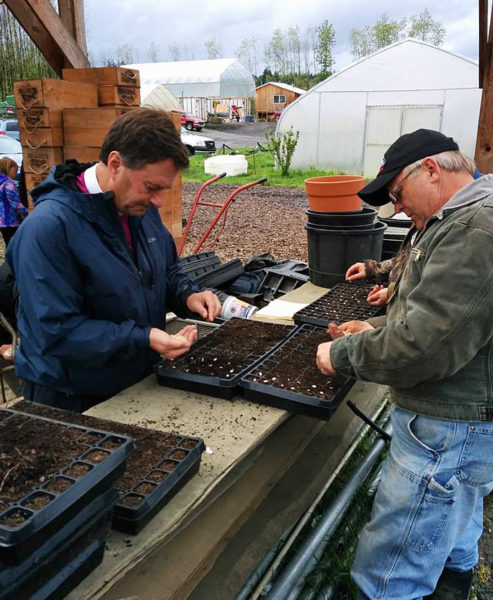 “I don’t pay anybody anything,” he said with a sheepish grin.

The operation rents 9 acres from Chinook in what Eichner calls a “sweetheart deal.” Down the road from Chinook, Eichner and the volunteers work another 3 acres that belong to a landowner who had planned to farm his 75 acres until the 2015 floods wiped out his winter cover crops and he was faced with replanting everything. Eichner proposed planting winter squash on some of the land.

“This guy goes to church at the Foursquare Church and he gets what we’re doing,” he said. “So he becomes an ally and he says ‘I’ll let you use three acres this year for nothing.’ That was a huge gift.” 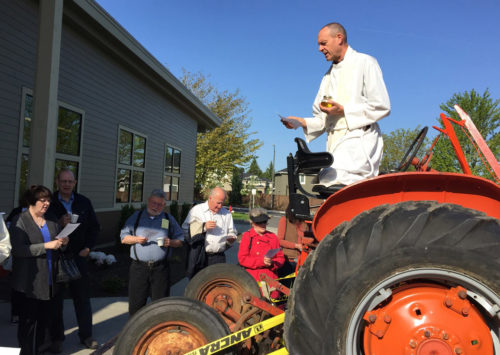 Then there’s the fellow who was once an altar boy at Holy Cross but no longer goes to church. He keeps all of the farm’s machinery running, including a 1953 Allis-Chalmers tractor. In exchange, he says, Eichner has to do his funeral.

Those relationships are what Eichner likes to call the “bonus edges” of the work. And for many of those people, “this is their way to stay connected to the church.”

Many of the volunteers are not churchgoers. A “vocal atheist” told Eichner recently that he really liked what the Food Bank Farm was doing. Eichner told him that he knew that was high praise coming from him.

“Most people in that camp think the church is just ridiculous, absurd,” Eichner said. “There’s some people, whether they’re in the church or not, they look and say: ‘This is what the church ought to be doing.’ ”

No matter their motivation, the volunteers are key to the farm’s growing success. Many work for businesses that want to demonstrate their corporate citizenship or offer team-building experiences for their employees. They connect to the farm through what Eichner calls the vectors of his parishioners. The same is true for civic and service organizations such as United Way and scout groups, as well as sports teams.

Working at Food Bank Farm not only feeds the physically hungry in the Seattle area. Many volunteers are fed spiritually as well, Eichner said.

“They love getting out of their urban cubicle and coming out to touch the ground again,” he said. “There’s something very primally sacred there.”

“There’s good mojo out in this valley,” Eichner added, and it’s not just because repeated winter flooding has gradually made the soil as rich as the Nile Delta with nearly 12 feet of silt. Although, he added, “You can basically grow 10,000 pounds to the acre, without even trying, in this kind of land.”

Fritch agreed, saying he sees God everywhere out in the valley. “We’re just the stewards,” he said. “It’s critical that people feel the physical connection to the earth as well as the spiritual world around us. I think they’re interconnected very deeply.

“Agricultural references in the Bible are everywhere. Yes, it was an agrarian society, more so than our world today. Still, there’s that sense of the seasons and the different aspects of that natural life that’s very spiritual and biblical.”

Calling himself a “practical Christian” who wants to see thing put into action, Fritch said Christians are called to act out in the world. “We can’t fix all of the problems through what we’re doing here but, I think people have a better sense of care for their environment and the world around them if they have a better connection with where their food comes from and how the world operates in this growing way that was designed by God.”

The Food Bank Farm is, in the words of Brian Sellers-Petersen, a good example of “different strokes, for different folks.”

Church-community agriculture projects can range “from the large scale Food Bank Farm ministry of Holy Cross, Redmond, to Imago Dei Middle School in Tucson that has a concrete courtyard filled abundant produce growing in containers, horse troughs and vertical gardens to Trinity Wall Street‘s indoor hydroponic garden in their Sunday school to the Faith & Grace Garden at St. Timothy’s, West Des Moines,” said Sellers-Petersen, senior adviser to the president of Episcopal Relief & Development and a champion of church-community agriculture. “The Episcopal Church has it all when it comes to church agriculture”

“The examples are seemingly endless and we can glean ideas, inspiration and help with just a little digging by using the Episcopal Church Asset Map,” said Sellers-Petersen, who is also the author of “Harvesting Abundance,” due out soon from Church Publishing, Inc.