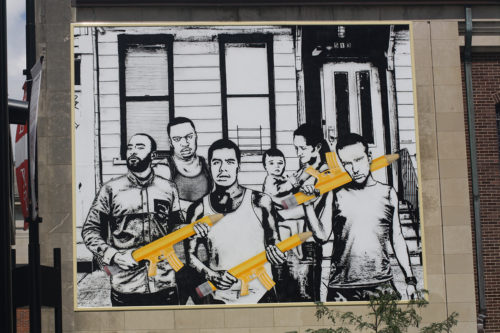 An anti-gun-violence mural was painted on the exterior of Christ Church Cathedral in downtown Cincinnati as part of the cathedral’s efforts to address gun violence. Photo: Sarah B. Hartwig

[Episcopal News Service] Seven people have been killed in Cincinnati by gun violence in the month of August alone. In 2016, there have been 63 homicides in this city of 300,000 people.

Christ Church Cathedral has responded by placing a 20-by-24-foot mural on its building’s south side façade at a busy intersection in the city’s downtown business district.

The mural, created in partnership with ArtWorks Cincinnati, a nonprofit that trains youth to create art for public impact, depicts a group of young men holding pencils that resemble guns with grips, triggers and magazine.

“The juxtaposition of an image that looks like a gun but is actually a pencil is the artist inviting us to imagine what might be possible if weapons were transformed into something quite different,” said the Very Rev. Gail Greenwell, dean of Christ Church Cathedral. 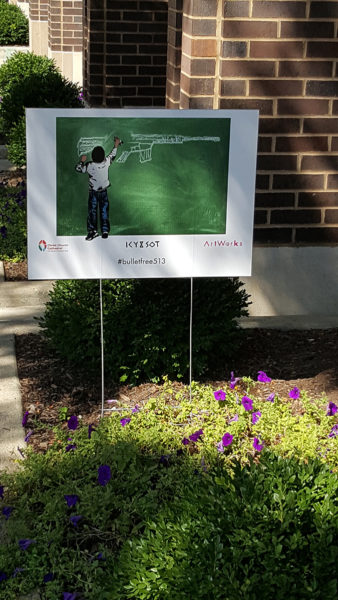 Anti-gun-violence yard signs produced for Christ Church Cathedral in Cincinnati, Ohio, have been placed at homes and businesses around the city where gun violence has occurred. Photo: Sarah B. Hartwig

The piece, designed by urban artists Icy and Sot, joins a series of banners and signs showing a young child erasing the image of a gun drawn on a chalkboard. These yard signs and vinyl banners, which reinforce the importance of education, are placed at homes and businesses hit by gun violence

As part of a yearlong initiative, the cathedral is partnering with city leaders and community advocates, including Mitch Morris of the Cincinnati Works’ Phoenix Program, to combat gun violence in Cincinnati. Since 2007, the program has worked to curb urban violence and address the cycles of poverty.

In addition to his work on the scene, Morris assists the grieving families of victims who cannot afford to bury their loved one. It is in this capacity that Morris has partnered with Christ Church Cathedral to offer funeral services for victims of gun violence.

Instances of gun violence, while numerous, are still grossly underreported in the local media, said Morris.

“Each week, I receive at least six calls from police about a shooting. Of these, at least one is a homicide,” he said. “The general public rarely hears about those other incidents that leave victims severely injured or permanently disabled.”

Each Sunday, cathedral members and friends in pray for those killed. A list is maintained on the cathedral’s website to further honor the victims and showcase the gravity of the situation in greater Cincinnati.

“With each instance of gun violence in our city, the ramifications send shock waves throughout the community, affecting a radius of hundreds of friends, family and loved ones,” said Greenwell. “Christ Church Cathedral is committed to bringing our message of love, peace and compassion out of the pulpit and to the streets.”

Together, the Phoenix Program, which also helps those in need attend school and gain work experience, and Christ Church Cathedral are working to provide alternatives to crime and violence via prayer, gun buy-back programs and educational opportunities.

Morris has witnessed the correlation between gun violence and a lack of education through his work with police, victims of violence and their families.

“A lot of times, these gun crimes are poverty-driven. It comes down to one thing: People need a job,” said Morris, adding that he’s had many conversations with individuals who “truly believed” they didn’t have any options beyond crime because of a lack of marketable skills.

Morris is pleased with the impact of this art initiative. “People living in spots prone to violence are asking for the yard signs – they want to get involved,” he said. “It’s a great feeling knowing that we’re all working toward the same goal.”

Morris’ hope for Cincinnati is simple: to go a weekend without receiving a phone call about a shooting.

Greenwell also looks forward to having a more peaceful community.

“Through public art displays and our supporting services, we are putting our message into practice and encouraging others to join the conversation and make Cincinnati a safer place for everyone,” she said.

“As a society, we’ve become numb to the reports of shootings and death, but we want to do more than say ‘our thoughts and prayers are with them.’ We don’t have the luxury of helplessness or hopelessness. We are called to action to stop the violence.”

The gun violence prevention initiative is one of many community outreach services offered by the cathedral, such as providing food and housing assistance, and sponsoring community issues forums.

For more information on the cathedral’s efforts to reduce gun violence, click here.

— Sarah B. Hartwig is director of communications for Christ Church Cathedral in Cincinnati, Ohio.