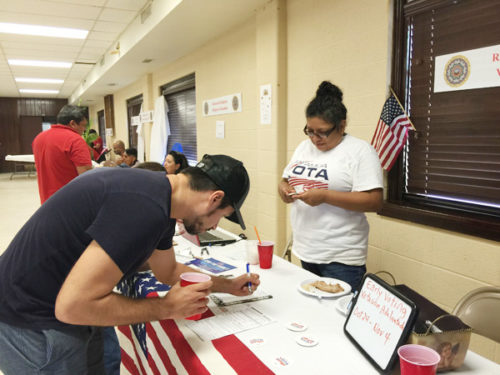 [Episcopal News Service] Registering voters Aug. 14 at La Iglesia Episcopal San Pablo in Houston was just the start of an Episcopal Diocese of Texas and Mi Familia Vota partnership to help get out the vote.

Increased public awareness and interest, possibly due to a contentious election season, sparked the initiative, according to Paulette E. Martin, diocesan communications specialist.

“People want to be involved. The whole political arena right now is very important to them,” she told Episcopal News Service recently.

“They want to be a part of this,” Martin added. “We figured it would be a good way to educate people and to give them tools to register people to vote, and to encourage their families and friends to help make a difference.”

Ten people registered to vote at the event. Others were trained and “deputized” to begin canvassing local communities to help even more residents make their voices heard in the Nov. 8 general election, she said.

With an Oct. 11 state voter registration deadline approaching, Carlos Duarte, Mi Familia Vota’s Texas state director, said he hopes to reach additional voters who feel marginalized and who may not have engaged the process in previous years.

“With Spanish-speaking communities, they are always torn in participating in the political process because they feel that none of the political parties represents their interests 100 percent,” Duarte said.

“They feel that one mirrors their position on abortion while the other agrees with their stand on immigration and acceptance and views for diversity. They are always torn between those options and sometimes that leads to paralysis.”

Not so this year, he said.

“This year, particularly, the presidential campaign has been so polarized, it’s made them want to get involved.”

Mi Familia Vota is a national nonprofit organization with field offices in Arizona, Nevada, California, Colorado, Florida and Texas that “seeks to unite the Latino community and its allies to promote social and economic justice through increased civic participation,” Duarte said.

Duarte said the partnership of Mi Familia Vota and the Episcopal Diocese of Texas represents the first time “in five years of doing this, that a church actually approached me to partner with them. Duarte already is planning a subsequent voter registration event with the diocese.

“We do a lot of work with churches, but usually we have to go and convince them to get involved, and it’s always very difficult.”

Churches are somewhat skittish about political involvement because, as nonprofit organizations, they must adhere to certain guidelines regarding political campaigns or risk losing their Internal Revenue Service nonprofit status, Martin said.

But the Episcopal Public Policy Network’s Election Engagement Toolkit “was just one more reason we thought organizing this effort would be a good idea, because we’re not telling people how to vote, we’re just giving them the tools to vote and educating them about it,” she said.

The EPPN toolkit, available online with guidelines and resources for church political involvement, cites official church position that “voting is an act of Christian stewardship,” according to the toolkit. The website also invites Episcopalians to sign a pledge that they will vote in the Nov. 8 general election.

EPPN is “calling upon congregations to engage in conversation on public policy issues, to develop voter registration and issue education campaigns, and to advocate for protection of voting rights.”

“There are a lot of productive and good things that churches could do in the political process that doesn’t get them afoul of their nonprofit status,” agreed Julie Anderson, auditor for Pierce County, Washington.

Earlier this year Anderson assisted in a training and voter registration event at the Holy Family of Jesus Episcopal Church in Tacoma, Washington.

Some 70 Cambodian senior citizens registered to vote at that event. Anderson told ENS she has been working with the Korean Women’s Association and its Indochinese Cultural Service Center, housed on the church’s campus, to help educate voters.

“Through them (the Korean Women’s Association), I visited just about every one of their senior meal sites and did voter registration.”

Churches are especially poised to assist in such efforts because they “are community centers,” Anderson said. “They are places that people gather and many churches are already actively engaged in using their resources and facilities to reach marginalized populations,” said Anderson.

Such civic engagement could even include hosting candidate forums “as long as they’re well-balanced, that all the candidates have an opportunity to participate but (that they are) not skewed in any way.”

Other faith-based groups are also forging voter initiative partnerships. The PICO National Network on Aug. 4 launched “Together We Vote,” a multifaith, multiracial voter education and get-out-the-vote program after the close of the Republican and Democratic National Conventions.

“We believe every person of faith should exercise their right to vote as an act of faith in co-creating the beloved community we all desire here on earth,” PICO’s political director, Bishop Dwayne Royster, said in a network press release.

“We’re going to train 15,000 volunteers and leaders within our federations and allied organizations to go and do the work of knocking on doors and having phone conversations” to make sure people vote this season.

The multifaith national- and state-based effort includes representatives from churches and other organizations, including the United Church of Christ, the Religious Action Center of Reform Judaism (RAC); the African Methodist Episcopal Church; Bread for the World; Sojourners; and other groups.

RAC Associate Director Barbara Weinstein, in the release, also cited concern about the attempted marginalization of voters through the “systematic silencing of individuals and communal voices at the ballot box in the form of closed polling stations, limitation on early voting and onerous voter ID laws.”

At least 10 states representing collectively more than 80 million people have attempted to put into place restrictive voting laws ranging from “new hurdles to registration to cutbacks on early voting to stricter voter identification requirements,” according to the American Civil Liberties Union’s website.

On Aug. 15, the governor of North Carolina said he would ask the U.S. Supreme Court to reinstate a voter ID law and other restrictive measures passed by the state assembly in 2013 and overturned by a federal circuit court in July. North Carolina Episcopal churches have been working, as they have historically, to make sure voters have accurate information.

Missouri Bishop Wayne Smith, in an Aug. 15 online blog post, offered hope for the defeat of a proposed state constitutional amendment that could require voters to present “valid government-issued photo identification” in order to vote.

“The proposal seems fair enough to many, since everyone has a photo ID, or so they say,” according to Smith. “In fact, there are more without IDs than you might think. Sixty-four percent of U.S. residents do not have a passport, the second-most common form of acceptable ID. Eighteen percent do not have a driver’s license, the most common form of all. This latter number account for the sector most vulnerable to voter suppression. As a group, they are older, poorer, and more likely to be other than European in descent.”

Smith added that since 2005, there have been 17 convictions under voting laws in Missouri. “The greater the poverty of the electorate, the easier it is to suppress the vote.”

The Rev. Joseph Pae, rector of All Saints Episcopal Church in Great Neck, New York, said he is hoping to reprise a voter registration drive held before the April 19 primary election.

The Korean American Civic Empowerment association sponsored the drive and registered about 10 first-time voters, he said.

“In the past, the Korean community has not been active or registered to vote. We have been trying to raise more voter awareness,” Pae told ENS. The gathering involved neutral conversations and voter education, and assistance in completing the voter registration forms.

“Some people were hesitating before, but they appreciated being able to attend a forum at the church,” he said.

In California, where almost 650,000 new voters registered in the six weeks prior to the state’s May 23 primary election deadline, All Saints Church makes voter registration available every Sunday during the election season.

“We invite the League of Women Voters to host a table after our church services and take registrations as needed,” said peace and justice director Juliana Serrano.

The 3,000-member Pasadena church came under IRS scrutiny in 2004 after its former rector, the Rev. George Regas, preached a sermon two days before the 2004 election in which he imagined Jesus participating in a political debate with then-presidential candidates George W. Bush and John F. Kerry.

Regas told the congregation that “good people of profound faith” could endorse either candidate but criticized the Iraq War and said Jesus would have told Bush that his preemptive war strategy in Iraq “has led to disaster.”

Eventually, the IRS dropped its investigation of the church.