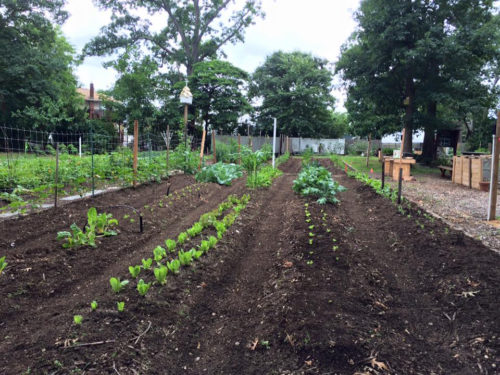 [Episcopal News Service] Ann McPartlin calls them “God incidents” – those pivot points in the life of a church when God’s plan becomes a little less mysterious, when connections are made and a way forward is revealed.

By that measure, God is hard at work at St. Francis Episcopal Church in North Bellmore, New York.

The history of this suburban Long Island church stretches back only about two years, to the merger of two parishes. That and the sale of one of the two churches were catalysts for change, as was the growth of a successful farming ministry that has breathed new life into the congregation and the working-class community it serves.

“It’s been a blessing,” said McPartlin, 71, a senior warden at St. Francis. “We’ve joined together as a parish family, and I just think the love of the ministry is there, people willing to work.”

A merger of two struggling Episcopal parishes is hardly new, nor is the sale of old church buildings at a time when dioceses are looking for ways to make ends meet. Farming ministries are common, too – rich in the biblical symbolism of sowing the seeds of rebirth.

But as in a puzzle, the pieces of this parish’s rejuvenation have come together in unexpected ways, making it an example for other parishes in the Diocese of Long Island and drawing the attention of the Episcopal Church, which recently backed the Garden at St. Francis through its United Thank Offering grant program, or UTO.

The Rev. Mark Genszler applies the theme of rebirth as much to the congregation as to the ground.

“It’s the life cycle of the soil and of compost and of food. … I think it’s also very true of this small community here,” said Genszler, who came to the parish two years ago as its first full-time priest. “There was enough of a spark of life here and enough of a prayer life to point those people outward.”

A garden ministry is born

Before St. Francis, there were St. Mark’s and Christ the King. Both churches had struggled to retain members, neither had a full-time priest and Sunday worship attendance in each had dwindled over the years to about 35.

Diocese of Long Island Bishop Lawrence Provenzano visited the neighborhood in December 2010, McPartlin said, and he pointed out an additional problem at St. Mark’s: The church wasn’t very visible in the community.

“A lot of people thought that the church was closed. There wasn’t a lot of activity going on,” she said.

A short time later, a representative from the diocese spoke at St. Mark’s about grants available for new ministries, and McPartlin and a small group of church leaders brainstormed ideas. One of them, Susan Salem, was familiar with the food pantries on Long Island, and she suggested a garden.

The idea made sense. What St. Mark’s had in abundance was land, about two acres. Church leaders quickly assembled a grant application and submitted it in February 2011. By that April, they had their seed money and got to work preparing a 50-by-100 garden plot on church grounds.

“We had to begin from scratch,” McPartlin said. They didn’t expect much that first year, but the new garden yielded produce to donate to local food pantries. A new was ministry born.

The garden wasn’t guaranteed to bring more people to church on Sunday, but McPartlin said they saw themselves as the “little church with a big heart” and were achieving their goals of increased activity and outreach.

“Hunger is a really big issue everywhere,” she said. “People think it’s somewhere else, not in your neighborhood, but it’s people living on your street.”

The importance of that work came into sharp focus in early November 2012 after Hurricane Sandy devastated much of New York City and Long Island. McPartlin estimates the number of people in need of food suddenly doubled.

Hurricane Sandy also happened to force the Diocese of Long Island to cancel a meeting planned that week between the bishop’s staff and St. Mark’s leaders. At the rescheduled meeting a month later, St. Mark’s got the news: The diocese had determined that St. Mark’s and Christ the King were a good fit for a merger.

“That’s a very tough experience, to merge churches, because we knew one of them was going to close, and at that point, we didn’t know which one,” she said.

With St. Mark’s in need of repairs, McPartlin said it seemed clear the congregation would end up at Christ the King, which had a much newer building. That could have meant the end of their garden ministry.

But the garden survived. Under the final plan, the property at Christ the King was sold to a Korean-speaking church, and the proceeds will be used to fix up the buildings at the former St. Mark’s, which had a more prominent location. The garden has become an integral ministry of the combined church, and the choice for a new name was appropriate, Genszler said, given St. Francis’ appreciation for nature.

Extensive renovations at the former St. Mark’s will make parts of the church and parish hall unrecognizable in about two years, McPartlin said. With modern advances in building technology, it may even become the “greenest” church in the diocese.

Satisfying hunger in many forms

A green, energy-efficient building would fit well with the Garden of St. Francis’ expanding ministry. Its application for a UTO grant sought to build a permanent greenhouse and create a coordinator/educator position.

The problem of hunger loomed large: hunger for food, for knowledge and for spirituality. Genszler emphasizes another kind of hunger, one that reaches back to Long Island’s agricultural roots before suburban communities began paving them over in the 1940s.

“I think there’s a deep hunger for some sort of connection to the non-human-controlled landscape,” he said.

Those hungry souls have found a home at the Garden of St. Francis. Volunteers help work the land. School groups come to learn. The church sells some produce at a parish farmers market, and it has donated about 7,000 pounds of produce to food pantries over the years. Its application UTO grant also raised the possibility of establishing an environmental education center.

“Not only is the Garden at St. Francis a successful, exciting feeding ministry connected both to community organizations and other parishes, but they eagerly share their knowledge and encourage collaboration,” said Mary Beth Welsh, executive director of Episcopal Ministries of Long Island, which provided some of the early money to get the garden started. “It is exactly the kind of model that we want to support and encourage throughout the diocese.

Genszler acknowledges the UTO application may have been overly ambitious. The church didn’t get the $80,000 it requested, but grant officials were impressed with the garden initiative and offered the church $20,000.

That’s a big boost for the garden ministry, as well as for a congregation that was struggling just a few years ago before the merger. Church membership is stable now, and for the people of St. Francis, the garden ministry is fertile ground for symbols of new life.

“You don’t have to underline it too much,” Genszler said. “The garden kind of preaches the word itself.”