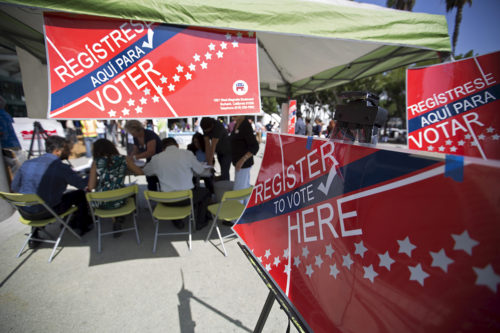 [Episcopal News Service] The Rev. Jemonde Taylor observed the political process in action for the first time as a kindergartener when his father brought him along to the polling place.

“We went into the booth and pulled the curtain, and I watched him punch the card,” he recalled. “I didn’t understand what was happening at the time, but I remember that.”

That early memory stuck with Taylor throughout the years, perhaps because he grew up hearing his father’s account of trying to register to vote as a young black man in the South and listening to the story of his grandmother not being able to cast a ballot for the first time until she was in her seventies.

Now, as the rector of St. Ambrose Episcopal Church in Raleigh, North Carolina, Taylor is leading his church’s voter registration and advocacy efforts. Working for widespread access to political and civic life is in St. Ambrose’s DNA. The historically black church served as the starting place for marches through downtown Raleigh during the 1960s to protest disenfranchisement of black voters, and several parishioners are old enough to remember the church’s roles as a stop during the 1961 Freedom Rides.

“Since before I’ve been here – four years in September – there have always been voter registration pamphlets on a table in the narthex next to sign-up sheets for vacation Bible school and homecoming,” Taylor said. When voter laws change, a frequent occurrence in North Carolina in recent years, the church sets out fact sheets explaining the changes and reminding people of their voting rights, he added.

Fact sheets have proved a valuable tool here where the state assembly and the governor have called for tighter voter restrictions. On Aug. 15 the governor said he would ask the U.S. Supreme Court to reinstate a voter ID law and to let counties decided to extend or shorten early voting. The governor’s request followed a July 29 federal appeals court ruling that struck down a 2013 law passed by the North Carolina General Assembly setting strict voter ID requirements, reducing the state’s early voting period and eliminating same-day registration and provisional balloting for people voting in the wrong precinct. Opponents of the legislation argued that it places a disproportionate burden on black and Latino voters, college students and older adults. Since its passage, the law faced several legal challenges and modifications, leading to widespread confusion among voters about exactly how and when they can vote.

The appeals court held “that the law had been enacted with racially discriminatory intent” and target African-Americans “with almost surgical precision.” The governor maintains that the ID requirement is a model for other states enforcing similar laws unchallenged.

A History of Voter Registration

For many North Carolina churches engaging in voter registration efforts is less about court decisions and more about filling what members see as a call to Christians to be involved in the public sphere.

Parishioner Nancy Tunnessen has coordinated voter registration events at Chapel of the Cross in Chapel Hill since they began in 2008. “To me, my faith should inform how I live my life and the choices I make about how I give my time or my resources,” she said. “Fairness in voting is one of the things I think is important and is something I think is worth working for.”

On Sundays in the late summer and early fall, Tunnessen and other volunteers set up tables with voter registration materials and information in front of the church after services. The church gears its efforts toward parishioners, but the timing fits with the start of the fall semester at the University of North Carolina. New students visit the church at the start of the semester, and many of them are not aware they need to update their voter registration to vote locally. Chapel Hill is also a popular place to retire; new residents and even long-time residents who move from a house in town to a retirement facility need to update their voter registrations.

Reaching Out to Neighbors

While Chapel of the Cross is reaching out to people at changing life stages, St. Andrew’s Episcopal Church in Haw River and St. Andrew’s Episcopal Church in Greensboro aim voter registration efforts at disenfranchised Latinos. Both churches have worked to build relationships in their Latino communities and view bilingual voter registration efforts as the next step in deepening those relationships.

St. Andrew’s, Haw River, is located next to a neighborhood of mobile homes rented primarily by immigrant families with whom the church has built a relationship through its community garden and an after-school tutoring program.  The program led to a few adults from the neighborhood asking the volunteer tutors for help filling out their citizenship applications. Knowing these new citizens would need to register to vote, the Rev. Miriam Saxon, vicar at St. Andrew’s, arranged for volunteers to receive training through the NAACP with the intention of canvassing door-to-door.

A courtesy call to the owner of the trailers, however, squashed that idea.

“The woman who picked up the phone said, ‘We don’t believe what you believe,’ and told us we’d be unwelcome,” said Saxon. The woman, she added, did not elaborate on the difference in beliefs, but Saxon decided not to canvas the neighborhood to avoid causing trouble between the families and their landlord. Instead, on Aug. 27 and again in September, volunteers will give out information and registration forms at the church. The church plans to send fliers home to neighborhood parents in the backpacks of children in the after-school program, to advertise the dates in the newspaper and put up a sign along the highway next to the church.

Not all barriers to voter registration in Latino communities are external. The Rev. Audra Abt, associate to the rector for mission and community engagement at St. Andrew’s in Greensboro, has deep ties to the city’s Latino community through her work as a missioner for Puerta Abierta, a house church serving a largely Latino neighborhood, and her involvement with community organizing groups. Fear of sharing personal information with the government is a common theme in the stories she hears from Latinos.

“People I’ve met with are worried about what will happen when they put personal information on a legal document, even when they are citizens and have the legal information they need to vote,” Abt said. “People who are documented are protective of their families and neighbors who aren’t.”

Confusing changes to immigration laws over the years have led many members of the Latino immigrant community to conclude it’s safer to skip registering to vote.

“It’s difficult to get accurate information when a lot of the people around you aren’t registered and can’t be,” Abt said.

To help spread accurate information, in May several members of St. Andrew’s and Puerta Abierta attended a voter advocacy training by the North Carolina Congress of Latino Organizations held in St. Andrew’s parish hall. Spanish-speaking and bilingual recipients of that training have already held four voter registration drives at Latino credit unions, churches and strip malls with clusters of Latino-owned businesses. Four more drives are scheduled through the fall. In October, volunteers will follow up with people who register during one of the events to help arrange rides to the polls for those who need them.

Back in Raleigh, the people of St. Ambrose are doing similar work. In 2012 and 2014, the church partnered with Democracy North Carolina, a nonpartisan organization that encourages voter participation and government accountability, to stage a telephone bank and canvassing center in the church’s parish hall several Saturdays throughout the fall. The church has also participated in Souls to the Polls, a Democracy North Carolina event that gathers congregations in a central location after Sunday worship for a rally and voter registration event. St. Ambrose is planning similar activities this fall.

“It’s about our stewardship of time,” Taylor said. “God gave us this life, and we need to engage. I want you to come to the annual meeting and be vocal about vestry members. When it’s the stewardship drive, I want you to fill out a pledge card. It is your constitutional right to vote, and I want you to register. This is what God calls us to do: to be engaged.”

— Summerlee Walter is communications coordinator in the Diocese of North Carolina.