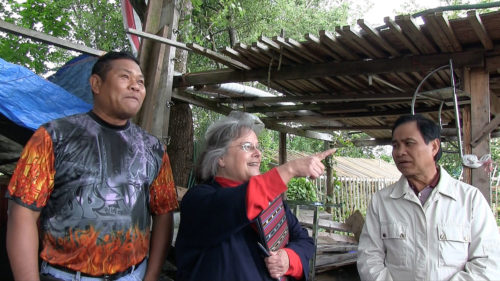 [Episcopal News Service – Tacoma Washington] Church-community agriculture may be just catching on in some parts of the Episcopal Church but when the gardens at Holy Family of Jesus Cambodian Episcopal Church were first planted 20 years ago, they were harbingers of the movement.

The gardens and the church have grown up together since Holy Family was founded in 1990. From their early years in the mid-1990s to today, the individual plots have been like a balm in Gilead for Cambodian refugees who had fled the terror and death that stalked their country in the late 1970s and early 1980s. Those refugees survived life in resettlement camps in Thailand before arriving in the United States, where few of the people they live among spoke their language.

Some Cambodians came to the U.S. after the fall of the Cambodian capital Phnom Penh to the communist Khmer Rouge in 1975, but the large wave came after the Khmer Rouge was overthrown in 1979. Close to 150,000 Cambodian refugees were admitted to the United States after the war in Indochina, with most arriving between 1980 and 1985.

They were initially sponsored by church groups and voluntary agencies and were scattered around the country. As time went on and sponsorships ended, the refugees began moving to where they knew others had already settled. The Seattle/Tacoma area was one of those areas.

“To come here where everything is so different and you are emotionally depleted and to have the chance to put your hands in the soil” and reconnect with their memories of farming in Cambodia have made the gardens, which began in 1996, “a place of grounding, a place of peace,” said Sue Bernstein, a member of Holy Family for more than 30 years.

The idea of a community garden fits exactly with Holy Family’s original – and continuing – vision to be both a place to worship and a place for the surrounding community. The church has its roots in St. Matthew’s Episcopal Church in the Brown’s Point area of Tacoma. In October 1980, the parish sponsored a Cambodian family. They began attending the church and some other Cambodians followed them.

Eventually, the Cambodians felt they needed a place of their own and, because of where most of them lived, they began looking in the Salishan neighborhood. Then-retired Bishop of Alaska David Cochran, who was the congregation’s vicar, approached foundations and other churches for financial help. Eventually, the Diocese of Olympia bought the land and, in May 1990, the congregation dedicated the building.

Around that time, the Tacoma Housing Authority got a federal grant to fight a growing drug and crime epidemic in the Salishan development, which is one of the largest subsidized housing developments on the West Coast. The program began to work, people felt it was safer to go out and meet their neighbors, and Holy Family was there waiting to welcome them.

The congregation also raised up the Rev. Sam Lee, who in 1999 became the first Cambodian priest in the Anglican Communion. 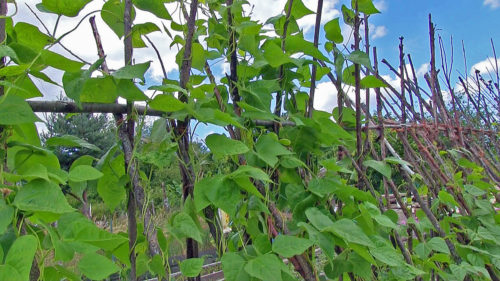 Those who garden on the land that stretches off the back of Holy Family’s parking lot have become an extended family. Some, but not all, are members of the congregation. Over the years Cambodians have gardened there alongside Vietnamese, Laotians, Samoans and Russians. For all of them, and especially the older Cambodian gardeners, the chance to grow some of their own food has been a peaceful way to “connect with the positive things from when they were farmers in Cambodia” including the communal aspects of growing and sharing food with each other, according to Bernstein.

Sarom Chin and Soeung Long have had garden plots for the past three years. They helped to clear out a tangle of blackberry bushes and expanded the planting area. They are continually improving the plots.

Soeung Long is a member of Holy Family, sometimes playing instruments during worship. He said he comes to work in his plot here because he is proud of the way it looks and he likes growing food for himself and others.

Sarom Chin, who is not a member of Holy Family, volunteers at the congregation’s senior citizen food site and both men share some of the food they grow with the seniors who come to Holy Family each week for a community meal. The local Korean Women’s Association offers meals to Cambodian seniors two days a week and to Vietnamese seniors two other days.

The two men said their time in the gardens includes good stories told by good friends. They have built an above-ground platform area around a large tree at the back of the gardens. It serves as a gathering spot and as a storage area for gardening implements. Next door is their compost bin. Nearby is an area where the men have hosted very popular corn roasts in the fall.

The only creatures the men are not happy sharing food with are deer. “They eat everything,” he said. 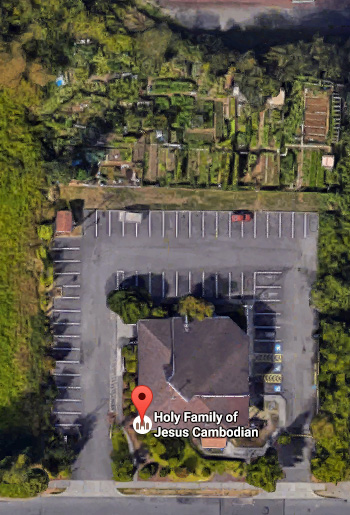 Holy Family sits in a gritty and relatively poor neighborhood of East Tacoma. Parts of the neighborhood are technically on the Puyallup Indian Reservation, one of the most urban Indian reservations in the United States. The Salishan housing development is named after the family of languages originally spoken among Northwest Coast indigenous peoples.

Bernstein ran a Bible study in the Salishan development and met some of the Cambodian families when they first came to the United States. It was through her connections with them that she got involved at Holy Family.

She has also been involved with community gardening since before the land behind Holy Family was first tilled. She helped to develop a community garden in Salishan. The idea for Cambodian community gardens also has roots in a project begun at the neighborhood elementary school where teachers and others saw thought that a garden might help show young people that their elders, who seemed slow to catch on the ways of living in the United States, had wisdom and skills worth honoring and learning, Bernstein said.

Over the years she has helped to connect Holy Family’s gardens to the larger community. In the 1990s Bernstein worked with the Eastside 4-H Club, which founded Eastside 4-H Honey Co. and Youth Fresh Herbs and Flowers. The latter gardened on some of the land that ran between the church’s parking lot and what was then an abandoned orchard. The project began in the early years of the gardens’ life and the 4-Hers helped enhance the site by making it more suitable and productive for gardening, she said.

Bernstein sees community gardening as a holistic approach to church outreach. It nurtures people’s physical, emotional and spiritual dimensions. Gardeners save money by growing some of their own food, she added, and they know they are eating healthy foods.

Such church-community garden plots can be evangelists as well. Bernstein said drawing people together in a nurturing place like a garden can be a first step “that can draw them to the Lord.”