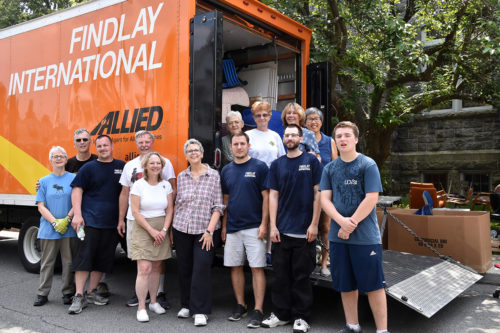 The team of volunteers on moving day, with one of the trucks packed and ready for the trip to New Haven, Connecticut. Volunteers included parishioners and community members.

[Episcopal News Service] When St. John’s rector, the Rev. Joseph D. Greene III, read Bishop of New York Andrew Dietsche’s call to assist refugees at the vestry’s Sept. 15, 2015, meeting, there was no hesitation. Vestry members and parishioners embraced the call. Initially interested in co-sponsoring a refugee family, St. John’s learned that Westchester County doesn’t have a refugee resettlement agency. The church then turned its attention to working to change that, while at the same time exploring immediate ways to assist refugees.

St. John’s was one of a handful of Episcopal churches in Westchester County that came together in November 2015 to form the Westchester Refugee Task Force. The group has grown to include over 30 churches, synagogues, Islamic centers, civic groups and individuals. Together, they are supporting resettlement efforts in neighboring Connecticut and are working with two refugee resettlement agencies to try to set up operations in Westchester County.

While St. John’s continued to work with the task force, a special opportunity to help refugees arose in Spring 2016.
This year, in recognition of the bishop’s call, the vestry selected a refugee resettlement agency in New Haven, Connecticut, – Integrated Refugee & Immigrant Services – as the beneficiary of its 2016 Easter Appeal. Not only is IRIS the agency in closest proximity to St. John’s, but its Episcopal roots are strong: it was founded by the Episcopal Diocese of Connecticut in 1982, and it is an affiliate of Episcopal Migration Ministries, the Episcopal Church’s refugee resettlement agency.

Specifically, funds were raised to support IRIS’s Early Learning Program, a program aimed at providing “school readiness” skills for the children, while at the same time enabling their mothers to attend IRIS’s daily English classes. More than a fundraising campaign, the appeal included opportunities for parishioners and community members to learn about the plight of refugees and the refugee resettlement process in the United States. During the drive, which ran through the seven-week Easter season, parishioners had the opportunity to learn more about refugee resettlement firsthand from IRIS Executive Director Chris George. St. John’s parishioners raised $32,000 to support refugees. 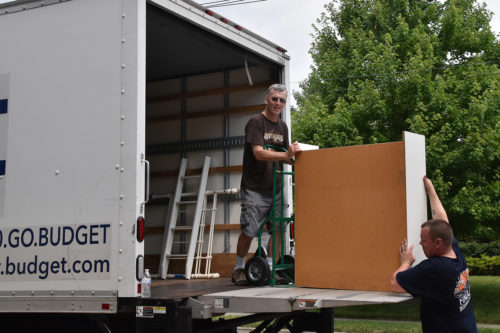 As the task force continued to work with agencies to explore the possibility of resettling refugees locally, its members became impatient and wanted to act to help refugees. St. John’s parishioners, Jmel Wilson and Wendy McFee, suggested to the task force that the church host a furniture drive for refugees arriving through IRIS to Connecticut this summer. They had no idea what the furniture drive would yield, or exactly how to get furniture to New Haven. The overwhelming community support – measured in both furniture and volunteer hours – showed that many others shared their passion.

Sixty-seven local families arrived in SUVs and trucks — some of them borrowed or rented — filled with gently-used furniture.  At the end of the five-day drive, more than 350 pieces of furniture filled the lower level of the church, including sofas, tables, chairs, bed frames, dressers and lamps — enough to furnish apartments for ten refugee families. More than 50 volunteers assisted in collecting, transporting, loading and unloading three truckloads and several mini-vans of furniture, including eight teens who are part of the Larchmont-Mamaroneck Chapter of the Lion’s Heart, a national teen service organization, and a handful of Yale football players who helped unload the trucks in New Haven. One Larchmont resident, Greg Mouracade, the president and owner of a professional moving and storage company, provided a 26-foot moving van and an experienced crew to help transport 3,000 cubic feet of furniture to New Haven

“The overwhelming response of donors was gratitude … to finally have some concrete way of responding to the horrifying news stories and pictures. To know that what they were doing was going to directly benefit people who had suffered so much,” said Wilson.

“Several donors came into the room and looked at the volume of the collection and were visibly moved by the generosity of our community,” said Wilson. “They would ask, ‘What else do you need?’  ‘What else can we do for these people?’  There was a great sense of relief that we are finally able to help.”

McFee shared that it was particularly touching on Father’s Day, the second day of the drive, to see so many fathers bring their children to the drive and explain its purpose to them.

IRIS is one 30 affiliates of Episcopal Migration Ministries. Finding affordable housing and providing furniture is one of the first tasks an affiliate does to assist refugees in beginning new lives in the United States. This year, IRIS expects to resettle 420 refugees from Syria, Afghanistan, Iraq, Sudan, the Congo and Eritrea