[Episcopal News Service – Seattle, Washington] Any urban Episcopal Church congregation that thinks it does not have enough green space for community gardening could learn a lesson from St. Andrew’s here.

Along the way, those congregations would also learn about an integrated effort to reduce the parish’s carbon footprint.

“We’re trying to be a model,” said J.B. Hoover, parishioner and garden volunteer. “An urban parish can do something. It’s not limited to a suburban or rural parish that has a lot of land.”

Approaching St. Andrew’s front side shows a mid-1950s A-frame-style building overlooking the Interstate 5 Expressway in Seattle’s Green Lake neighborhood. The building’s west and south sides reveal a different story. Two small terraced gardens flank the side street stairs into the church. In the side yard between the church and the house next door, owned by St. Andrew’s, are some old City of Seattle Green Cones for recycling food waste. Volunteers are transforming the house’s backyard from what had been an over-grown mess. Now, there is a terraced garden, a four-level composting system and some compost storage bins recently built by a fledgling Eagle Scout. 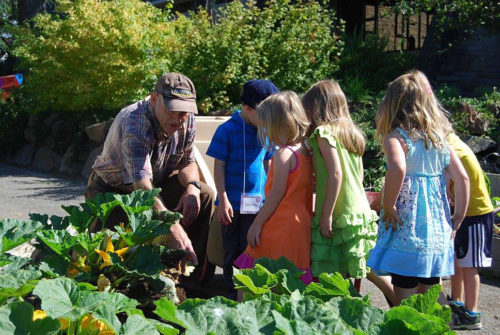 Last year, the gardens yielded about 600 pounds of food, most of which went into the parish’s own food ministries. These include a monthly community dinner known as Jubilee Supper and the Teen Feed Ministry whose participants supply a hot meal for homeless teens in a university-area church. Hoover acknowledges that not all congregations with gardening ministries keep the food they grow, instead donating it to food pantries, but St. Andrew’s wants to conserve resources.

“We don’t spend energy taking it off to another place and then going out and buying food for our own food ministry outreach,” he said.

That effort points to the parish’s goal of making its carbon footprint as small as possible. Forty percent of its food waste and 90 percent of the garden waste is composted. The composting begins with an organized waste plan to ensure what Hoover calls “high compliance rates” for recycling throughout the building. Clearly labeled bins are placed near where waste is generated so that parishioners don’t have to go find the bins.

For instance, Hoover and the Rev. Peter Strimer, the former rector, designed two carts for the parish hall that each have individual bins for trash, food waste and other compostable items, and recyclables. People clearing tables wheel the carts along and sort as they clean. In the kitchen, a composting bucket is labeled to explain in a yes-no fashion what goes into the compost and what goes elsewhere.

The food waste is destined for those Green Cones in the side yard. Hoover says the City of Seattle once subsidized people to buy the cones to compost in their own yards until the city turned to a different disposal method. St. Andrew’s volunteers got some cones for free and began composting. Months of layering torn-up cardboard with food scraps creates a friendly environment for some helpers in the process. “The worms just go crazy so we have great worm production,” said Hoover.

St. Andrew’s composting is not just about recycling as much waste on-site as possible. The resulting mulch is crucial to the garden’s success because all gardens need to be fed. “If churches take this seriously they have to understand that a lot of your time and effort goes into soil building and composting,” Hoover said.

Water is another ingredient for nurturing gardens and, contrary to the “it’s always rainy in Seattle” stereotype, water can be hard to come by. “Water is tremendously expensive here if you are buying it from the city,” Hoover said. “And we get almost no rain in the summer. We’re drier than Tucson, Arizona, in the summertime.”

To help conserve water, St. Andrew’s recently received a $550 grant for a drip irrigation system from the Diocese of Olympia’s Bishop’s Committee for the Environment. The parish also conserves water by recycling a ubiquitous byproduct of Seattle’s coffee scene: burlap bags that once held coffee beans make a great mulching layer.

“One thing I really like about this garden is that it never cost St. Andrew’s one dime. We’ve been fully self-sufficient,” Hoover said. “We’ve been able to do that through grants and a little entrepreneurial spirit of selling compost and things like that.”

Not all of St. Andrew’s environmental efforts take place on the ground. Its Creation Keepers group, which coordinates the parish’s care of creation, has been instrumental in bringing solar panels to the church roof and advocating for the Diocese of Olympia to divest from fossil fuels.

Creation Keepers and the garden volunteers hope to encourage their fellow parishioners and their neighbors to try to emulate their work. The visibility of a squash garden growing on the narrow strip of land between the street and the sidewalk invites conversation between volunteers and passersby. Sometimes visitors pick the squash. “We lose a lot of squash in the course of the year; that’s fine,” said Hoover. “It allows us to have the greater community connection.”

The nearby stairway gardens are terraced using a composite material called Trex. While St. Andrew’s might be expected to use wood dividers, Hoover said he explains to inquirers that the artificial material, while expensive at the outset, lasts longer and can be bent to accommodate garden space that doesn’t run in straight lines. 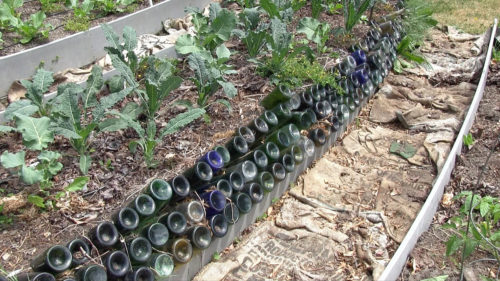 Another conversation starter is the empty wine bottles stuck neck-first into the soil on the lower edge of one terrace. A parishioner heard on the local public radio station about gardeners who believe that if they “plant” the bottles, they can begin their growing season earlier and extend it later into the fall because the bottles heat up in the sunshine and transfer that warmth to the soil.

“I really haven’t noticed a significant difference,” said Hoover, but their presence in the garden makes for good conversations. “And it gives the members of the parish an excuse to drink wine: they’re preparing for the next bed.”

St. Andrew’s model also shows that “for this kind of work to succeed, you really need a team,” according to Hoover. “One person does not have all the skills that are necessary for this to work well.”

People with organizational skills to mesh the volunteers with the work that is being done must work with folks who understand the more technical side but who might not be skilled at organizing. People to document the work and communicate its success are also needed. Food ministry cooks need to work with the gardeners to use produce as it ripens and understand what guests do and don’t like.

“That’s a struggle for us to be able to get all of that working well,” Hoover said. “It takes time and you’ve got to have a lot of patience.”

And you have to be flexible and willing to admit it when you make a mistake. For instance, a few years ago, Hoover was convinced by a parishioner to grow cabernet franc grapes with the thought that eventually they might yield sacramental wine. However, it turns out that red wine grapes cannot be grown west of the Cascade Mountains. Hoover plans to switch to table grapes and is planting plum trees, contemplating plum wine on the altar.

You have to work with the resources that you have, he said, and then “the vision just keeps growing as more people are involved.”