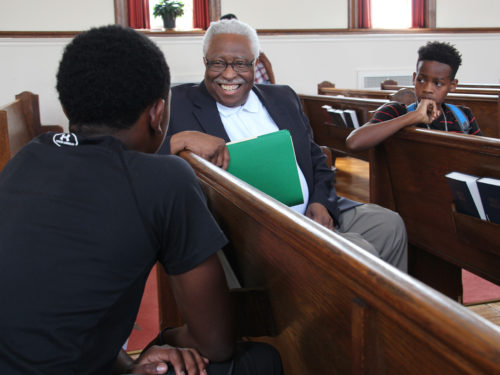 “When I came here, I was a very shy dude,” said Tucker, who will be attending Perry Hall High School in the fall. “Then they told me to just be myself. Then, I just cut loose.”

During the Aug. 5 graduation program at Morgan State University, Tucker cheered on the 28 other eighth-graders from throughout the Baltimore area who joined him for the four-week program, run under the direction of the Rev. Neva Brown.

Formally known as the Bishop Eugene Sutton Scholars Summer Enrichment Program at Morgan State University, the project represents a unique collaboration between the university Memorial Chapel and the Episcopal Diocese of Maryland.

One of its main goals was to help Tucker and the other scholars develop “soft skills,” such as learning how to organize their studies, manage their time, and carry themselves with confidence. While academic skills can be measured by tests, “soft skills” are harder to measure.

Sutton said the program is the result of a five-year effort to answer a difficult question that had come to him: “How can we make a difference?”

Plans are for the scholars to continue in the program each summer until they graduate from high school. Each one has been paired with a mentor to follow them through the academic year. Also, another class of young scholars will be added each year until there are four classes, each with about 30 students. Currently, the program costs approximately $2,600 per student.

During the graduation ceremony, the scholars presented a performance that seemed to express sentiments found in a prayer from the Episcopal tradition that begins: “God our Father, you see your children growing up in an unsteady and confusing world …”

Five young scholars wearing white handkerchiefs around their faces danced to songs that spoke of the fear of gun violence and the need for freedom. Behind them were images projected on a screen. Many were positive. Photographs of George Washington Carver, the scientific genius; Bob Marley, the great reggae musician; the Rev. Dr. Martin Luther King Jr., triumphant at the famous March on Washington; and Oprah Winfrey, who has built a communications empire.

Other images spoke of the violence that has cut short so many young lives: Tamir Rice, 12, fatally shot by a Cleveland, Ohio, police officer; Freddie Gray, 25, who died from injuries suffered in the back of a Baltimore City Police van; Sandra Bland, 28, who was found hanged in a Walker County, Texas, jail cell; and Emmett Till, 14, who was lynched in Mississippi in 1955. 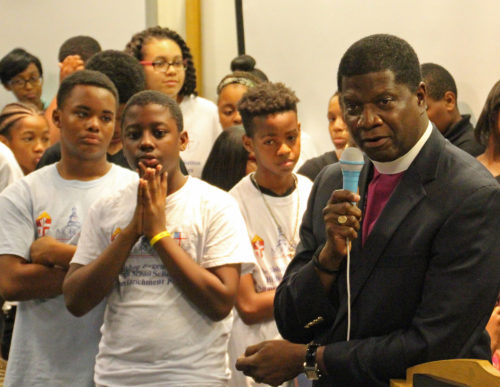 Bishop Eugene Sutton tells the scholars at the end of their four week summer program they are now part of a larger family of people who are investing in their success. Photo: Diocese of Maryland

The greater hope of those who came out to support the program is that the compass for these young lives points to a future of possibility and achievement. The young people spoke of wanting to be professional basketball players, brain surgeons and computer scientists.

“There are going to be stories and legacies built by these young men and women as we go forward,” said the Rev. Bernard Keels, dean of chapel at Morgan State University.

This summer the scholars built a legacy of service by making 400 sandwiches – 200 meals – for the homeless in partnership with the Salvation Army. And, they had a chance to expand their appreciation of the culturally rich world that surrounds them.

Kendal Knox, 14, was intrigued by a performance at the Lyric Opera House.

“It was not my cup of tea, but it was very interesting, how the people can sing so high and sing so low,” said Knox, adding that the summer program helped him further develop his self-confidence and improve his organization skills.

When asked what he would tell a middle school student interested in the program, Knox replied: “I would say, ‘You need to do this. It will help you a lot with life decisions and it will look good when you’re trying to get into college.’”

Before giving the scholars a blessing from the Book of Numbers, Sutton reminded them that they do not journey alone. They were now members of an extended family.

“You are my sons and daughters, and I love you,” he said. “We love you. Make us proud.”

— The Rev. M. Dion Thompson is a priest in the Episcopal Diocese of Maryland.