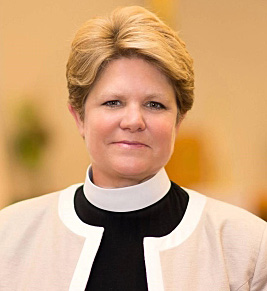 Duncan-Probe currently serves as the rector of St. Peter’s in the Woods Church in Fairfax Station, Virginia.

She was elected on the second ballot at a special convention held at the Holiday Inn in Liverpool, New York, receiving 87 votes in the lay order and 42 votes in the clergy order. On that ballot, 75 lay votes and 37 clergy votes were needed for an election.

“We give thanks to God that the Very Rev. Dr. DeDe Duncan-Probe has been elected bishop of Central New York. She is an extraordinarily qualified leader with a strong vision for the 21st-century church, and she truly loves the people and places of Central New York. We look forward to serving with her in ministry,” said the Rev. Christine Day, chair of the Diocesan Standing Committee and rector of All Saints’ Church in Johnson City.

“My heart is filled with joyful gratitude for God’s mercy and grace, and I am humbled to accept the call to serve as your 11th bishop,” Duncan-Probe said in a statement read to the convention. “Throughout this discernment process I have been inspired, encouraged, and emboldened by your faithful ministry and your sincere dedication to living the gospel of Jesus Christ in service to others. The honor of joining you in ministry is a profound moment, and I am especially mindful of the people God has called us to serve.”

Duncan-Probe was elected from a slate of five candidates. The other candidates were:

Smith and Cleaver-Bartholomew withdrew after the first ballot. Ballot results are here.

Duncan-Probe will succeed Bishop Gladstone B. “Skip” Adams III, who is retiring.  Adams served the Diocese of Central New York for more than 15 years and has been called to serve as provisional bishop of the Episcopal Church in South Carolina.

Pending confirmation by a majority of the House of Bishops and by a majority of the diocesan standing committees in the church, Duncan-Probe will be ordained and consecrated on Dec. 3. The service will take place at the Holiday Inn in Liverpool, New York, with the Presiding Bishop Michael B. Curr presiding.

Duncan-Probe, a priest in the Diocese of Virginia, has served as the rector of St. Peter’s in the Woods Church since 2009, guiding the parish through significant growth and revitalization. Previously, she served at All Saints’ Church in Stoneham, Massachusetts, St. John’s Episcopal Church in McLean, Virginia, and Holy Comforter in Vienna, Virginia. Prior to her ordination to the priesthood in 2004, she served as a youth director and as an educator, and co-founded an engineering consulting firm with her husband.

Duncan-Probe is dean of Region VII of Diocese of Virginia, a member of the diocese’s Committee on Congregational Missions and board member of The Diocesan Missionary Society. She also serves on the Board of Regents of The Goodwin House, a nonprofit care organization for aging adults, and is an adjunct professor at Virginia Theological Seminary.

She holds a B.S. in education from Stephen F. Austin State University, an M.A. in psychology from Pepperdine University, a Master of Divinity from The General Theological Seminary, and a Ph.D. in theology from The Foundation House/ Oxford University.

Duncan-Probe and her husband, Chris Probe, have three children, Chasen, Ryan and Grace.

Established in 1868, the Diocese of Central New York is made up of 87 congregations and chapels, including one college chaplaincy. The diocese extends to 14 counties in the center of New York State: Broome, Cayuga, Chemung, Chenango, Cortland, Jefferson, Lewis, Madison, Oneida, Onondaga, Oswego, Seneca, Tioga and Tompkins.