The $12,500 grant was one of more than $1 million that UTO awarded in 36 grants earlier this year, all aimed at helping ministries that support the last of the Anglican Communion’s Five Marks of Mission: To strive to safeguard the integrity of creation and sustain and renew the life of the earth.

The grant will help St. James create a community program to connect at-risk families and children with what its application calls the “spiritual, nutritional and creative enrichment of learning to garden and compost in their homes” and community. The program, “Growing Grace: Sustaining a Community through God’s Creation,” will connect the parish and the Food and Faith program of Seattle Tilth with families in need in Kent’s East Hill neighborhood, including students and their families at the Title One-designated Kent Hill Elementary School just up the road from the church. 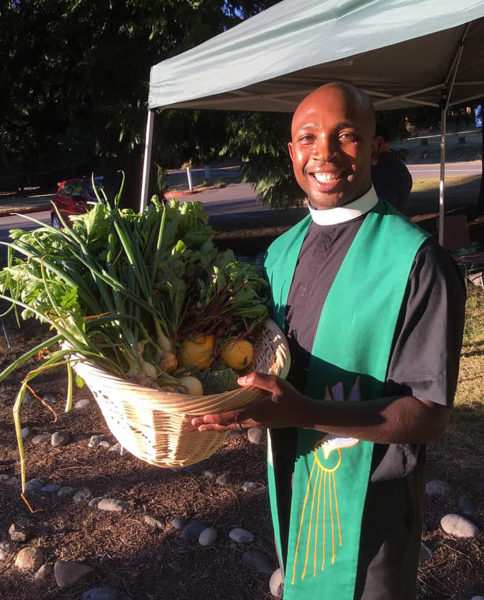 The Rev. Elias Mburu holds a basket of vegetables during a late July Mass on the Grass at St. James Episcopal Church in Kent, Washington. St. James’ garden recently received a grant from the United Thank Offering to expand its garden-based outreach ministry. Photo: Brian Sellers-Petersen via Facebook

St. James’ outreach center last year served 1,722 guests with food, clothing and mini-grants. More than half of those guests (935) were women, 652 were children and teens, and 1,320 were living below the poverty line, according the parish’s UTO grant application.

Kent, once a farming area, is now part of suburban Seattle. St. James sits on 5 acres of rich soil near a low-income area in the East Hill neighborhood, thus putting it, according to its application, “at the nexus of both natural resources and social need” with room to grow its ministry.

Outreach center director Dallas Shannon “has been so faithful in the (gardening) ministry and has been growing it little by little, and more and more people have gotten invested in it,” the Rev. Joyce Parry-Moore, who became rector of St. James in December, said recently.

“With God’s help and with help from UTO, we’re going to grow the garden into a really thriving part of the community,” Parry-Moore said of the garden that is now planted on a strip of land running along the church’s driveway. “We’re going to be developing it more into a teaching garden in addition to its being a sharing garden.”

The Growing Grace project will grow awareness both in the neighborhood and in the parish of the importance of sustainable living and environmental stewardship, St. James’ application said. 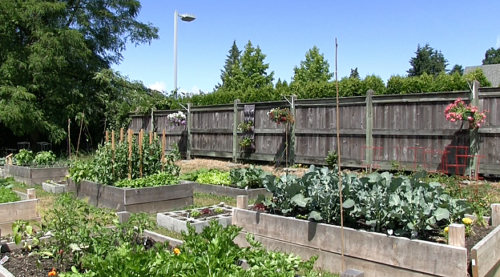 The garden at St. James will be expanded as it becomes the center of “Growing Grace: Sustaining a Community through God’s Creation,” a project supported in part by a recent United Thank Offering grant. Photo: Mary Frances Schjonberg/Episcopal News Service

Participants will learn about gardening, composting, sustainable living skills and healthy nutritional choices. The expanded garden will provide fresh produce, with any extra sold at a farm stand to be built with grant money. Revenue from the sales will help to sustain the project. The grant will also pay for the construction of a garden and a farm stand, as well as composting equipment, a garden internship and an outreach and arts educator, according to UTO’s summary of the award.

Diocese of Olympia Bishop Greg Rickel said on the parish’s UTO grant application in March that Growing Grace uses St. James’ assets in an innovative way that “brings earth and people together in a way that is long-term … and not just a quick fix.”

Parry-Moore said she foresees more garden space in what she laughing called “the back 40” behind the church building. “You can produce quite a lot of food on a half-acre,” she said.

She also thinks that these days “churches occupy a really unique space in the community” as government at all levels cut social services. Churches are safe spaces where people can gather and be nourished spiritually and physically, she said.

Learning to grow some of their own food can be empowering and “and then they can make the next step and the next step.”