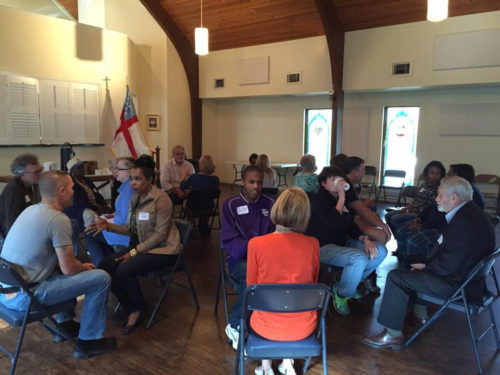 The Diocese of Atlanta’s Commission for Dismantling Racism holds a training in February at the Cathedral of St. Philip. Photo: Catherine Meeks

[Episcopal News Service] Scenes of violence and protest have unfolded with brutal frequency across a divided America accustomed to viewing such news through the lens of race.

“We who are Christians have a great call to stand in the middle and between all of that and try to offer an alternative to just being filled with hate and enraged,” said Catherine Meeks, a leading figure in the Episcopal Church’s ongoing efforts to fight racism in the church’s structure, its congregations and in society.

Meeks, a retired professor of African-American studies, leads the Diocese of Atlanta’s Beloved Community: Commission for Dismantling Racism. The commission and others like it around the country are part of the Episcopal Church’s mission over many years to dismantle racism and to come to grips with institutional racism in the church that some trace back to the earliest European settlements in America.

The church in 2000 required anti-racism training for leaders at all levels of the church, but not all dioceses implemented plans. And Meeks said there was reluctance from some parish leaders who saw the trainings as overly corporate.

Meeks has led the Atlanta commission for the past four years, during which it has found success and won praise for its emphasis on the faith journey. She and the diocese are at the forefront of a shift toward viewing the issue of race more actively through the lens of spirituality while crafting trainings to match.

“Racism is a spiritual issue, and it needs to be dealt with in that way,” Meeks said. “Dismantling racism is part of spiritual formation, the same as going to church every Sunday.”

The issue of racism comes up again and again at the church’s General Convention, held every three years. There, it is a question of faith.

Through baptism all people are seen as God’s children, regardless of race. Racism, then, “prevents us from becoming the beloved community to which our Lord Jesus Christ calls us in the Baptismal Covenant,” the church said in a 1994 resolution. The church stresses that racism is a sin that must be overcome – by worshipers and by the institution itself.

A resolution approved at the 1991 General Convention committed the church to “addressing institutional racism inside our Church and in society,” and a 2000 resolution renewing that commitment for another nine years lamented “the historic silence and complicity of our church in the sin of racism.”

“It goes back to the roots,” said the Rev. Charles Allen Wynder Jr., a deacon, who serves on Presiding Bishop Michael Curry’s staff as missioner for social justice and advocacy engagement.

Wynder, a lifelong Episcopalian now living in North Carolina, is originally from Hampton, Virginia, which he noted was one of the first European settlements in America and home to one of its first churches, St. John’s Episcopal Church. It also was here that some of the first slaves arrived in the New World, and like the history of the United States, the oppression of Africans and other people of color would become deeply embedded in the history of the Episcopal Church.

“The church was there in the beginning, and it was complicit,” Wynder said.

He cites examples through the years, from pre-Civil War farms in the South called “glebes” that were owned by parishes and worked by slaves to the controversy in 1963 in the Diocese of Atlanta in which the Lovett School denied admission to the Rev. Martin Luther King Jr.’s son.

The urgency of the church’s efforts to dismantle racism has risen this year with the deadly violence in Louisiana, Minnesota and Texas, Wynder said in a recent article “Bloody July” for The Living Church. “Racial justice and reconciliation must be on the Church’s agenda,” he wrote. “It cannot be ignored.”

Meeks, too, sees her work in the context of what is happening nationally, though her immediate focus is on her own city.

“Race is very much a thread through much of the life of Atlanta, and we’re just like many other cities, kind of walking on this tightrope right now,” she said.

Tying Race to the Spiritual Journey

Meeks offers this reminder to Christians: that they are on a lifelong spiritual journey, and racism isn’t a problem that can be solved in one daylong training.

The mandate to hold anti-racism trainings has challenged dioceses across the country for years. Attendees often felt the obligation but not the value, especially with the sessions typically spanning two days. Even the term “anti-racism” was problematic, Meeks said, so the Diocese of Atlanta changed it to “dismantling racism” in its commission name and added “Beloved Community.”

Under Meeks, the trainings evolved. They were condensed into one 9-to-4 day, and the location mattered. Meeks found it was more inviting to hold the sessions in parishes churches rather than the cathedral.

Most of all, the sessions had to be centered around spiritual formation. Each now starts with the Eucharist, setting the tone for the lessons that follow.

The diocese, like the Episcopal Church, is predominantly white, but Meeks tries to make sure there is some diversity in the room of 20 to 25 participants as she launches into the day’s exercises. The priests, deacons, seminary students, parish administrators and other lay people are asked to remember when they first became conscious of race. Another exercise aims to get them thinking about their own biases. After a short lunch break, the training turns to heavier topics, like the concept of white privilege.

The group also cites scripture. It prays at three different times. And at the end of the session, participants share moments from the day when they felt the presence of God.

“That one training has completely changed the way I think about things and really kind of my life going forward,” Leah Tennille said.

Tennille, 33, was elected last year to the board of the Urban League of Greater Atlanta, one of three white board members – “It was the first time in my life that I’ve ever been a minority in the room” – and she was encouraged by the rector at her church to try one of Meeks’ trainings earlier this year.

She appreciated that the session began with communion, and that Meeks created a safe space for all to talk honestly about race. In one listening exercise, participants paired up to share a time when they were hurt by someone of another race.

The trainings also impressed Joyce Smith Hendricks, who attended a session last fall because she is on a committee recruiting a new rector for her parish in suburban Atlanta.

Smith Hendricks, 66, now retired after working in finance and accounting, said she felt the effects of racism in the workplace, where coworkers’ conveyed different expectations for her as a black woman.

“I have pretty much always been the exception to the rule. ‘Oh, you’re black, you’re different than the rest,’” she said.

Her dismantling racism session was mostly white, but participants of all backgrounds left feeling they got something positive out of it, Smith Hendricks said.

Tennille, who owns a company that provides grant assistance to nonprofits, said Meeks’ training “brought us together as Episcopalians.”

A Mission Beyond Atlanta

After an estimated 14 trainings this year, the number is expected to climb to 20 next year. People used to hate attending them, Meeks said, but now the demand is growing. 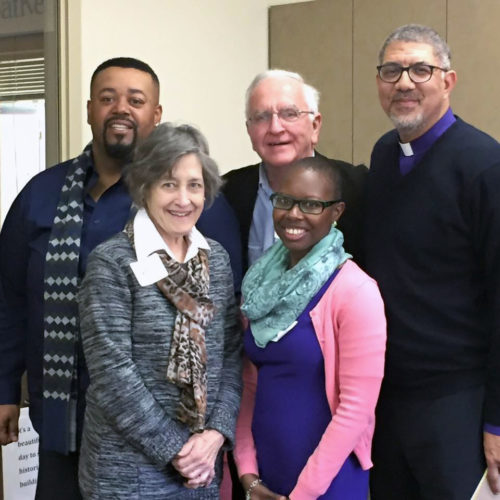 At the same time, dioceses around the country are trying to learn from Atlanta’s success, and delegations from Chicago and New Orleans have traveled to Atlanta to see the commission’s work up close.

“I feel a lot of similarities between our struggles and what Atlanta has faced,” said Lindsey Ardrey, co-chair of the Racial Reconciliation Commission of the Diocese of Louisiana.

After Meeks traveled to New Orleans in December to speak to Ardrey’s commission, Ardrey and three others drove to Atlanta in February to attend one of Meeks’ trainings in person.

“What I appreciate … is that there’s no guilt involved in any of this,” said Ardrey, who echoed others in praising the program’s spiritual foundation.

The lessons learned in Atlanta are guiding the Louisiana diocese’s response to the recent killings in Baton Rouge. In one case, the commission has been asked to provide resources to help an Episcopal high school in the city discuss the violence with students when they return in the fall.

“We need to be talking about it,” Ardrey said. “We’ve been pretending that race doesn’t matter and we’re all colorblind, and clearly we’re not.”

Meeks feels a “sense of urgency to get some of this stuff right” in light of current events. Her primary focus remains at the local level.

“I would like to see the commission put itself out of business,” Meeks said, envisioning an ideal future when the work started by the commission happens organically at the parish level and even person to person.

Such a vision is far from a reality, but Meeks still thinks people can take what they learn in her training sessions and put it to use immediately fighting racism in their own lives and in their communities.